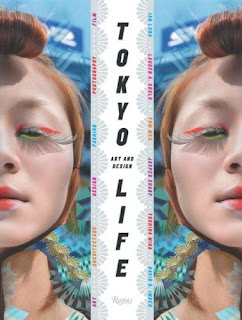 Jasper Sharp and Tom Mes are gods of the written word. Midnight Eye has long been one of my favorite haunts. Their latest contributions are cinematic sections to Ian Luna's Tokyolife: Art and Design, published by Rizzoli.

As Jasper has announced: "This magnificent tome, put together by Ian Luna of Rizzoli, just arrived through the post the other day. It's been a long time in coming, with the publication date put back on several occasions, but well worth the wait.

"Something between a coffee table book and a particularly lavish art catalogue, this 500-page hardback contains numerous essays, photos and art reproductions of all aspects of creative production in Tokyo, including fashion, architecture, graphic design and music.

"Tom Mes and I contributed the inevitable sections on cinema, with Tom's essay Center Stage City: Tokyo in the Movies focussing on recent live action productions that use the city as their backdrop, and my essay Futurscape looking at how the shifting face of the city has influenced both the form and the content of a number of key animation works over the past few decades. There's also a selection of several directors whose work has made specific use of the city. I'll leave it up to you to guess who these might be…

Though obviously I'm a little biased, it's a beautiful-looking book, and something I feel honored to be included in. (If I never get another thing published….) For those interested in the broader synergy between this vibrant cultural hub and the creative agents who inspire and are inspired by it, this is something you'd certainly want on your bookshelf."