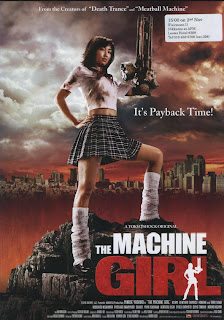 San Francisco's Fifth Annual Another Hole in the Head Film Festival ("Holehead08") had its press conference this morning where the line-up was announced and Noboru Iguchi's The Machine Girl was screened. Boasting its West Coast premiere, The Machine Girl is the kind of date movie that will see blood-frenzied couples rushing out of the Roxie Film Center hungry for tempura or at least some finger food at a house party. Is it really true that revenge is a dish best served cold? Not when there's a wok with bubbling oil around! 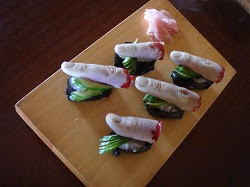 Leave it to Iguchi to capitalize on Rose McGowan's machine-gun-sporting leg from Grindhouse: Planet Terror and amplifying it into a no-holds-barred vengeance-inspired blood bath. We're not just talking buckets of blood here; we're talking shower nozzles of blood. There's more spurting severed limbs in this film than you can count and the only thing missing is a Teledyne shower pik for adjustable blood flow: from a smoke-like spray to a pat-pat-pat pulsing massage. Perhaps in the sequel?

Let alone that fashionistas will tremble in their seats appreciating the first drill bra that lifts and (I mean it) separates.

The Machine Girl has been pretty much covered by the Twitch team. Gommorahizer first announced the project had gone into production a little under a year ago, including early production stills provided by the film's special effects wizard Yoshihiro Nishimura (whose work can also be seen in another Holehead08 West Coast premiere Exte: Hair Extensions). 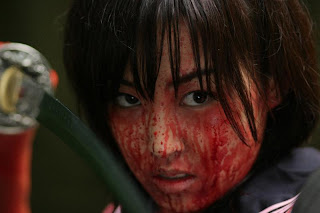 Dispatching from the 2007 American Film Market where The Machine Girl had its world premiere, Todd Brown described it as a "low budget, futuristic sci-fi response to the huge budget historical fantasy Dororo" and over the course of the next week offered up several behind-the-scenes effects shots and production stills. When Todd finally secured the trailer for the film, it resulted in the highest spike in last year's Twitch traffic. The popularity of that trailer inspired Todd to hunt down trailers for Iguchi's other films.

Earlier this year Todd interviewed Iguchi who admits that there's "not really" any such thing as too much blood and violence and—concurrent with its upcoming June 3 DVD release—San Franciscans have the opportunity to decide for themselves when The Machine Girl screens three times at Holehead08: on June 6 at 9:30PM, June 12 at 5:00PM and June 14 at 9:30PM. Should you still feel ambivalent, here's a YouTube clip and Ardvark's review from the Amsterdam Fantastic Film Festival wherein he indirectly suggests that this is the movie that should have been entitled There Will Be Blood. 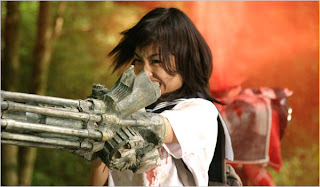 05/25/08 UPDATE: Opening last Friday for a one-week run at the Pioneer Theatre in Manhattan, Jeannette Catsoulis comments in The New York Times that The Machine Girl is "a riotous blend of arterial spray and grindhouse glee" and certainly "retrofitted for revenge." At The House Next Door John Lichman promises "you won't find a better splatter film for the next few months."
Posted by Michael Guillen at 5/13/2008 02:47:00 PM

Are you seeing any of the films at HoleHead08? As you know, I strongly recommend Alone.

I'm limiting myself to a mere handful, Peter, but the Thai flick Alone is certainly one of them. Thanks for recommending same.