Graham Leggat introduced Graydon Carter, one of the producers of the closing night film Gonzo: The Life and Work Of Dr. Hunter S. Thompson, and the editor of Vanity Fair magazine since 1992. Not only was this the West Coast premiere of Gonzo, but the Vanity Fair Reel Relief benefit, which Carter proudly announced had raised $100,000 for the Natural Resources Defense Council. He, in turn, introduced Alex Gibney.

Gibney credited Carter as being the individual responsible for phoning him with the idea of doing a film on Hunter Thompson, some of whose writing Vanity Fair had published. Gibney further acknowledged two other producers in the audience: Alison Ellwood and Eva Orner. He stressed the importance of showing Gonzo to a San Franciscan audience since the city was so much a part of Thompson's life. To preface the film, he offered a quote by Thompson on show business: "Show business is a cruel and shallow money trench; a long, plastic hallway where thieves and pimps run free and good men die like dogs. But there's also a negative side." Gibney added that Thompson also had a saying: "Buy the ticket, take the ride." "You bought the ticket," Gibney shouted out to his cheering audience, "take the ride!"

And what a ride! Equally hortatory and hagiographic, Gonzo frames a larger-than-life personality, the likes of which is nowhere to be found elsewhere even if crucially needed in such desperate times.

Gibney returned to the stage after the screening accompanied by co-producer Alison Ellwood. Kicking off the questioning, Graham asked them to describe the arc of the project, what they saw as they were going through it and what they found in the story that meant the most to them. Ellwood said it was a spiritual experience for her and that it felt like she was channeling Thompson for two years. Gibney responded: "Hunter embodied the essential contradictions of the American character; that's what made him so exciting. The great sense of idealism. The great sense of possibility. And he understood more than anybody the fear and the loathing. It was tremendous to work with his words." It wasn't a "discovery" really; but, one of the things Gibney felt most strongly about was that "the word should be front and center." The spirit of that was caught in Johnny Depp's readings. To be able to use Thompson's words to tell his own life story was a thrill. 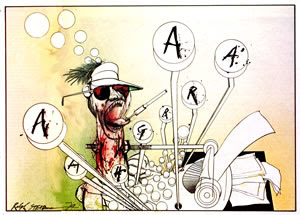 Curious whether Ralph Steadman had more to say about his collaboration with Thompson than contained within the documentary, Gibney at first joked that no, every single frame of Steadman footage had been used in the movie, but then admitted Steadman was magnificent, had designed the poster for the film, and that the DVD would contain much more footage of him, necessary since Ellwood had nixed the five and a half hour cut of the film.

The biggest challenge of the project was what to leave out. One of the great gifts given the producers of the film by Thompson's estate was to rummage through all his kept materials—audiotape recordings, photographs, pieces of paper—an extraordinary treasure trove of the material of an extraordinary person. There was no way all of this material could fit into the film. At some point "this mysterious otherworldly being called 'the story' " took over and forced them to pare it down. Though these materials have not yet been handed over to a public institution by the estate, they eventually will be all organized in a central location. In addition to the film, a CD of Thompson's audio recordings will likewise be released. 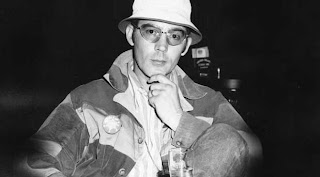 Asked how Gibney distinguished between Thompson's facts and fiction in the film, Gibney quipped, "Is there a difference?" One of the great things of Thompson's writing was his ability to move from fact into fantasy or just some sort of exaggeration. Because Hunter gave permission in his own writing, cinematically the film was allowed to play with his own tools, veering off from reality while keeping true. As was said in the movie, Thompson's was the least factual but most accurate reportage of the McGovern campaign.

As Gonzo opens with scenes from the bombing of the Twin Towers on 9/11 and Gibney claimed access to Thompson's complete files, one audience member was curious if Gibney found anything to support Thompson's suspicion that 9/11 had been "an inside job"? Though Gibney had heard of Thompson's suspicions, he didn't come across anything during his research to suggest Thompson "had found the Rosetta Stone."

Though the film was perhaps not initiated with any particular political or moral aim, Ellwood did discover that Thompson was able to see things in a fresh less-censored way than today's press corps and she hopes young reporters can embrace his skepticism of journalistic objectivity or at least creatively break the rules as he did. 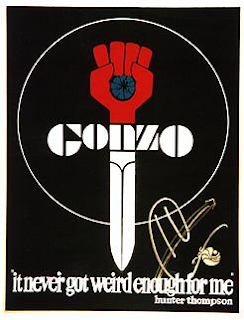 One viewer wondered if the filmmakers had set out to paint the most positive portrait of Hunter Thompson they could since hardly anything negative was said about him from the film's talking heads. "We rigorously eliminated any negative comments about Hunter Thompson; we felt it would be inappropriate," Gibney quipped; but then qualified that many disparate people simply loved Hunter Thompson. They were engaged by him, amused by him, charmed by him and seduced by him. Pat Buchanan is a great example of someone who battled with Thompson fiercely. Back in 1968, they would get roaring drunk on Wild Turkey whisky and end up screaming at each other about the Cold War. They'd wake after a couple of hours sleep and try to function. Apparently one afternoon Thompson terrified Buchanan's wife by showing up with a couple of cases of beer balancing on his fingertips and Buchanan steered him away towards the swimming pool where they drank all afternoon. Politicians loved him. They had a well of affection for him. Perhaps because he had played politics himself? Through some of the comments made by those closest to him, Gibney felt that as filmmakers they had sketched out that Thompson was far from perfect and that he could indulge his dark side; but, these contradictions within him helped him to see the same dark contradictions in the American character. What amazed Gibney was how all these disparate people from various walks of life really loved the guy and had a tremendous affection for him.

Though Thompson's son towards the end of the documentary stated that the family had always known Thompson would take his own life by gun and—though no one seemed surprised when it happened—one woman was curious whether there was any direct speculation on why he committed suicide when he did? Had he lost most of his tools and his drive and knew he couldn't fight the fight that was going to be necessary in the face of the Bush administration? Gibney has heard all these speculations; but, the truth is that it's very hard to know. Suicides are always a great mystery. One thing that might have been mentioned a little bit more in the film was that Thompson was in terrible health; he was failing and in much pain. That might have figured in. There was possibly also a mythic dimension that Thompson was also playing out. But, at the end of the day, a suicide is always a mystery and—even though he has heard all these speculations—there's no insight he can add. 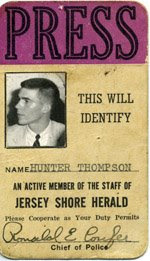 Graham Leggat wrapped up the evening by praising the film as a brilliant memorial to Hunter Thompson and a great way to close the 51st International.

Dave Hudson at The Greencine Daily has gathered the Sundance Film Festival reviews for the film, where Cathleen Rountree interviewed Gibney for SF360, parts one and two.

05/10/08 UPDATE: Via the Greencine Daily, Claire Howorth writes up closing night for Vanity Fair. "Thompson's Nixon-era loathings (and fears) come across as all too prophetic in light of current events, and the resonance was acutely felt here in one of the country's most liberal cities. When the screen split into frames mirroring disturbingly similar images of Iraq and Vietnam, you could feel chills tingling up the arms of every Patagonia-sleeved, wine-swilling yuppie cinephile. The ghost of Gonzo was in the house."

I'm not sure how I feel being categorized as a "Patagonia-sleeved, wine-swilling yuppie cinephile", or even if I caught a glimpse of Thompson in a white sheet and cut-out holes for eyes; but, sure, the prophetic relevance of Thompson's concerns remains disturbing and effective and the YouTube clip provided with Howorth's report is worth embedding. Is it disrespectful to suggest that Thompson reminds of Mitch Pileggi: X-File's Assistant Director Walter Skinner?