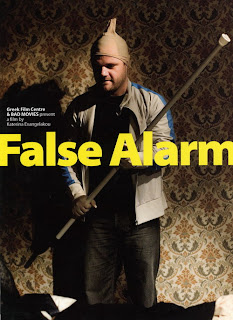 Synopsis: "It is summertime in a pedestrian street in the heart of Athens. The residents are bored with their neighbors and feel indifference towards them. Someone parks his/her car in the street, activates the alarm and leaves. We never see who it is. The alarm of the car keeps going off all night, for no apparent reason. Inside their apartments, the 19 characters of the film are annoyed; they protest and threaten to do something about it. The unsolicited, persistent sound of the alarm will not let them rest. This is the night their paths will cross—with dire consequences."

When Variety reviewer Jay Weissberg caught Katerina Evangelakou's "accomplished" False Alarm at the 47th Thessaloniki International Film Festival (2006), he observed that the car's faulty alarm seemingly brought the neighbors together in protest even as it emphasized their isolation. "Behind all the shutters," Weissberg concluded, "no one is happy and few are true to themselves—small-screen sentiments that also work on the big screen."

Evangelakou—a female director associated with the second post-dictatorship generation who have stormed "the male bastion of cinema with great ease, signaling the conversation of the female image from the object to the subject of the gaze" (Greek Film Center)—is known for forging a personal style combining realism and sociological observation and turning to tragicomic depictions of female dilemmas. Her films are billed as comedies though False Alarm successfully exceeds that limiting ascription.

Evangelakou's own notes on False Alarm—written for the Ninth European Film Festival—prove helpful: "Six different stories, nineteen characters of both sexes and all ages and professional backgrounds. For every story there is a line of action on the surface and another underneath this surface. The interest of the film lies in these lines of action running beneath the surface. Each character has committed a grave sin, but not the kind of sin punishable by law; as a result, their sins are perpetual. Much like an allegorical attempt to awaken the characters from their 'sleep', the car alarm blares continually, but will not manage to alert any of them. They all assume that the alarm has gone off by accident and try to make it stop in any way they can." Maria Katsounaki at Kathimerini characterizes that "sin" as "the beast within", hidden beneath the skin of "unknown, quiet working-class people."

Erikko Listis—who plays the belligerent cab driver Andreas who drunkenly insists his estranged wife Eleni (Angeliki Papathemeli) return home with him (and who likewise plays the masochist Takkis in SFGFF08's separate entry Soul Kicking, as well as surly Kostas in PALS)—commented when interviewed by Ekathimerini's Maria Katsounaki that the macho Andreas—along with the other characters audiences can sample at SFGFF08—helps to "form a picture of Greece today." Discounting his character is "lumpen", Listis describes Andreas as a "Neo-Elline", a colloquialism in Greek that connotes simple folk, with no working-class ethics, whose environment is nonetheless to a great degree proletarian. At film's end Andreas—exasperated with the car alarm—breaks the windshield and yanks out the alarm wires. The residents of the apartment house who have been kept up all night applaud him. Asked if he would do the same in real life should he find himself in a similar situation, Listis responded: "Yes, I would be among those clapping. We often say 'well done' to things we don't agree with politically but which eat away at you. We may lack the courage to do it ourselves, but when someone else does it for us, it's a relief. In the movie then, the people living in the neighborhood where the alarm is going off are applauding their own urge, but they simply didn't have the guts to do it." Katsounaki cautioned such actions were "still bullying" and Listis promptly responded, "Of course it is. The idea of 'he deserved it' is totally wrong. But, it would also be unrealistic if we showed the residents telling the taxi driver off. What you want is one thing and reality is another. The symbolism is clear. We don't know where the violence and hooliganism that is accumulating in our society will lead. It's an alarm bell to our politicians." 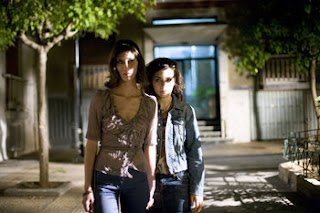 At a panel entitled "Just Talking: When Comedy Meets Drama" held at the 2006 Thessaloniki International Film Festival, Evangelakou noted False Alarm depicts the real Greece and not the one we see in advertisements and magazines. "In our portrayal of the real Greece, we detected not only negative characteristics but positive ones as well." She added the film's humor stemmed from the dialogues as well as the actors' situations as well. Evangelakou speaks further on the film in a video interview (in Greek).

According to Wikipedia, another term for a false alarm is "nuisance alarm", along the lines of Aesop's Fable of "The Boy Who Cried Wolf", which is to say that an alarm—if false too often—undoes its purpose. And the car alarm is the perfect example. How many times have you heard a car alarm go off in your neighborhood without bothering to check, having heard so many go off for no good reason?

Throughout False Alarm the tension between truth and lies and what the appropriate response to crisis might be is looked at by way of the film's various narrative threads. Actor Fanis (Hristos Stergioglou, who plays the obsequious Drakos in Chariton's Choir) longs to rekindle his secret gay relationship with Marios (Dimitris Xanthopoulos) and is upset when he discovers Marios happened to be in the neighborhood in order to borrow money. Insisting he has no money to lend, Fanis then flounces Marios for lying to him under false pretenses. Eventually, however, Marios discovers that Fanis has been lying to him, adding insult to hypocrisy by hiding the money he possesses for fear of being robbed.

False alarms likewise have the potential of diverting emergency responders away from legitimate emergencies, which could ultimately lead to loss of life, and this is played out in the story of a doctor who forsakes a patient's care in order to respond to the needs of a demanding lover.

The central metaphor of the false car alarm in the film stretches unconvincingly into the supernatural towards film's end, and—despite the various narrative strands weaving together a bit too neatly—they still manage to be effective. As Weissberg summarizes in his Variety review: "Nicely woven storylines may not be original but rarely sag, thanks in part to ideas that spread identification across a broad surface."

At this juncture I would say that False Alarm is my favorite of the screeners I've seen from SFGFF08.