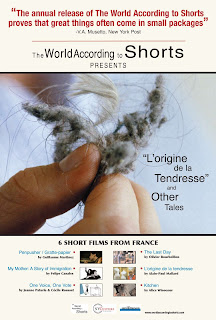 The World According to Shorts has acquired all U.S. rights to six notable French short films and will release the films theatrically in New York as a package, under the title "L'origine de la tendresse" and Other Tales, on May 30 at Cinema Village, followed by a national release.

The program, created by Jonathan Howell, founder and director of The World According to Shorts, Inc., is the organization's second release, following the critically-acclaimed release in 2006 of an eponymous package of six award-winning international shorts, which was also distributed nationwide, and subsequently released on DVD by New Yorker Video.

The program features the work of a generation of young, up-and-coming filmmakers—the first program of such work from France ever to receive distribution in the United States—and includes a broad range of styles and genres, from animation to fiction to documentary, reflecting the diversity of both the visions of contemporary French filmmakers and the people of France—from foundry workers in Brest to Algerian immigrants transplanted to Paris; the malaise of la vie quotidienne for a wealthy married couple to flirtatious youths in the capital's Metro system. 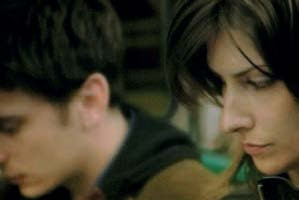 Private pleasures in public spaces and the dalliance of the unspoken underlined word reign paramount in Guillaume Martinez's charming Gratte-papier (Pen-Pusher, 2006), winner of the Silver Bear for Best Short Film at the 2006 Berlinale. Gautam Valluri provides an appreciative synopsis at Broken Projector.

This documentary reminisce is the story of the filmmaker's mother who left Algeria in 1956 to reunite with her husband in Paris. It is likewise the story of three generations of women: her mother, Zehira's; her daughters'; her granddaughters', recalled through a sequence of still photographs.

In the run-up to the 2007 French presidential elections, this animated short looks at the importance of voting. Its style is sketch-like with a two-tone emphasis on the colors teal and coral. With its admonition that voting preserves democracy, it struck me as simplistic. Likewise, its characterization of Venezuela as the poorest country in South America seemed factually inaccurate. I guess I am still soured by America's 2000 elections, stolen by time and other thieves. We won't get fooled again, indeed….

On July the 1st 2005, the 1867 Schneider and Co power hammer N°125 ceased operating at the former smithy of the Brest military harbor. This is the story of the machine and its workers' last working day. 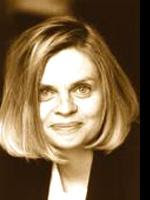 This centerpiece short, which won the Short Film Award at the Montréal Festival of New Cinema, provides a gentle portrait of Elise—in an understated slow burn performance by Isabelle Nanty. Elise is a quiet, solitary woman who works as a docent at the Bourdelle Museum in Paris. She leads a relatively uneventful life. However, "in a life in which nothing happens, no moment is devoid of meaning." Her quotidian existence is sketched out in calmly observed moments which reveal her kind nature. She listens to a friend's complaints, sweeps her apartment, waters her plants (and drinks from the same water glass), sleeps, fixes her bed and fluffs her pillow, distractedly offers sex to a workmate who discards her for her friend, does her banking by phone, suffers insomnia and sour milk, cleans her windows, washes her dishes, stops a dripping faucet, shelves groceries, encourages an artist sketching in the museum, tries to help a disabled widower locate the tip of a finger he's lost in an accident, offers phone card and chocolate to a mother and daughter in need—all seemingly random moments connected by a spirit of care that informs Elise and distinguishes her as a unique creature of light.

While reading a book in the park, Elise singles out a phrase that seems like a moment of self-discovery: "I've known people who've grown up in a room shared with parents, brothers, sisters and who—by night, covering their ears—read, stubbornly, beside the heater and who've made it out; outwardly generous and dignified, remaining—on the inside—sweet and well-inclined." This revelatory scene concludes with a focus on her bare toes playing with a ginkgo leaf.

L'origine de la tendresse is a lovely half-hour film and my favorite of the collection. Its narrative concludes philosophically: "I've given much thought—without finding any solution—to the origin of civility and of tenderness. As of today, I have no answer." Unconditional kindness has never seemed more mysterious.

This comic short was nominated for a Golden Palm at the 2005 Cannes Film Festival. I guess you could call it a chamber drama between a woman, her husband and two lobsters; a recipe that turns sour, but not before shorting out all the fuses.

At Slant, Rob Humanick finds Alain-Paul Mallard's centerpiece "an altogether suffocating non-story of one single woman's efforts to find meaning amid her joyless occupation as a museum guard and seemingly irrelevant existence in society. Originally made in 1999, Alain-Paul Mallard's film employs off-center, tightly framed compositions that deny the viewer a sense of place in which to take root, emulating the emotional void of central figure Elise's (Isabelle Nanty) own existence; even scenes that would suggest a release, such as when Elise visits a park and fondles a leaf between her toes, only add to the mounting stranglehold."

Ironically enough, this evening I was reviewing some notes on mythologist Joseph Campbell who—in his youth—had the opportunity to meet sculptor Antoine Bourdelle. "One phrase of his that got into my mind," Campbell recalled, "and it's been there as a kind of guiding phrase ever since: 'L'art fait ressortir les grandes lignes de la nature.' 'Art brings out the grand lines of nature.' " This, sadly, does not seem to hold true for Elise, whose life is demarcated by the simplest of lines.

Vadim Rizov's review for The Village Voice is less obliging. Regarding the centerpiece, Rizov writes: "Nicely framed and observed, there's no center here—no moment of change or self-realization, and no real reason to care otherwise." Mileage always varies, of course. Rizov considers Alice Winocour's Kitchen "the most accomplished of the bunch. It may not erase memories of Annie Hall, but it's the second-funniest use of lobsters I've seen."
Posted by Michael Guillen at 5/27/2008 11:50:00 AM

I saw KITCHEN and PEN-PUSHER and like them a lot. I’m glad KITCHEN will be widely distributed. I think it is great. The trouble of a woman in a kitchen in this film makes me think it should be played together with BLOW UP MY TOWN (1968, Chantal Akerman). I’m also a fan of Elina Lowensohn, the leading actress of KITCHEN. She gave a great performance in SOMBRE (1998, Philippe Grandrieux) and AMATEUR (1994, Hal Hartley), and in KITCHEN, too.

What a wonderful amplification, thank you! Especially for the guidance towards further performances by Elina Lowensohn. She was quite wry in Kitchen, fighting against routine by trying something different and finding it more than she could handle. That final scene of her walking at night near a stream of headlights, Madeline Peyroux singing, is quite lovely. Escape...