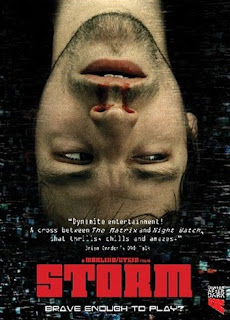 Swedish supernatural thriller Storm has confirmed something I've long suspected: when a voluptuous red-haired babe who kicks ass shows up in your life, pursued by leather trenchcoated henchmen, and hands you a silver box that holds your repressed memories, you might want to think twice before accepting it, dude.

Todd Brown first tested his finger to the wind on this film back in October 2005 when he offered up the trailer and a brief synospsis: "DD is young. Cool. Knows where it's at. Or thought he did. He is completely unaware that a struggle between good and evil has begun in which he himself is the arena. To get through it in one piece and alive DD must solve a riddle. A riddle whose solution will either destroy him or give him a new life." 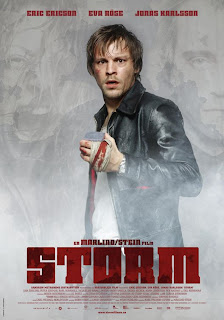 Storm then went on to screen at the Stockholm Film Festival where it won audience favorite and where Gunnar Rehlin reviewed it favorably for Variety, stating: "Starting out as a flashy and violent actioner, Storm gradually morphs into a multi-layered psychological study of a troubled young man. Fast paced, visually exciting and with enough plot twists to satisfy the most jaded filmgoer, pic has all the makings of a cult hit." Rehlin confirmed that directors Mans Marlind and Bjorn Stein "have created a dark, intriguing web where action, drama, comic books and computer games meet, clearly partly inspired by movies like The Matrix." Storm is a film whose "multi-layered plot, with its twists and turns, is as much a journey for the audience as for its main character, and many of the questions raised—is all this happening, or is it [DD]'s imagination?—are never really answered, heightening the sense of unease." 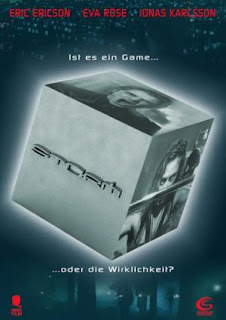 Gomorrahizer fleshed out production details as the film edged towards its screening at the 2006 Brussels International Festival of Fantastic Film. Peter Cornellisen reviewed this "Swedish genre masher" favorably when it screened at the 2006 Amsterdam Fantastic Film Festival, where it won the Silver Meliès (Meliés 'd Argent). Neil Young—who likewise caught the film in Amsterdam—was less enthused, stating that though the film had "[n]o shortage of ideas or style", it was "ultimately a somewhat pretentious exercise in melancholy bombast."

By June 2006, Todd Brown's own enthusiasm had dampened. Like Young, conceding Storm had "style o-plenty", he remained unconvinced that it had "the smarts to back up the style." But, ever fair, he offered up the theatrical trailers for the Twitch readership to decide for itself. 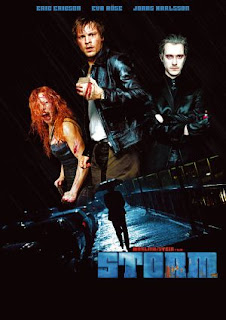 Storm is now available as part of TLA Releasing's razor-sharp Danger After Dark DVD series with the catchy tagline: "You may have forgotten your past, but it hasn't forgotten you." Count me among those who very much feel this film is a ride worth the ticket price, even if its storyline hiccoughs and doesn't fully integrate. I didn't much care; I was enjoying its sexy eye candy and slick production. I certainly got more than I was expecting. With its atmospheric lensing (especially in the nearly B&W fog-hued sequence when our protagonist travels back in time to confront the source of his anxieties) and startling sound design, it offered up effective tension with a few heart jolts along the way. Eric Ericson claims the screen with his befuddled, scruffy good looks playing Donny "DD" Davidsson who—as City Paper describes it—"approach[es] everything with the slouched malaise of an urban too-cool-for-schooler." Storm is a "trippy adventure into DD's messed-up past that plays hopscotch with space, time and the prophetic panels of a graphic novel." 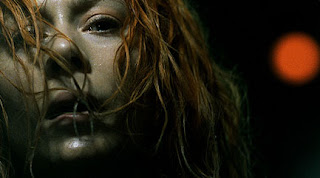 Complaints are valid. The storyline belabors DD's amnesia with introduced elements that ring inauthentic and film's end is problematic for not distinguishing what's real or not; but, you could do a lot worse for a DVD rental.