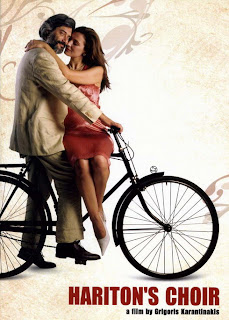 San Francisco's Fifth Annual Greek Film Festival ("SFGFF08") runs Friday, June 6 through Thursday, June 12, 2008, at the Delancey Street Screening Room and is being sponsored this year by the Modern Greek Studies Foundation, the Center for Modern Greek Studies, and the Nikos Kazantzakis Chair at San Francisco State University. This year's GFF showcases 16 feature films and short films which have received international acclaim. The opening night film on June 6 will be Ephemeral Town (2000) by Giorgos Zafiris and the following evening, June 7, a rare screening of the original version of Jules Dassin's He Who Must Die (1957)—based on the novel Christ Recrucified by Nikos Kazantzakis—will be shown. The complete program line-up is at the festival's website. 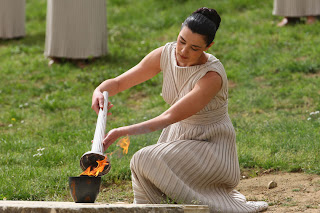 Chariton's Choir proves the frequent disconnect between critics and audiences. Admittedly, the film is not thoroughly successful in skirting overblown predictable sentimentality and nostalgic bathos, and several of its multiple storylines—intended to populate the film's small provincial town on the island of Corfu with madcap personalities—peter out after that mania is accomplished; but, it likewise has some very good things going for it, justifying its audience wins and festival popularity.

Straight off are the performances of the film's main characters. Corraface as the womanizing school principal Chariton Ulianov charismatically promotes a passionate carpe diem philosophy that inspires the impressionable adolescents in his choir. Alex Billington—who caught Chariton's Choir at the 2007 U.S. Comedy Arts Festival in Aspen, Colorado—insists Corraface's "fantastic performance … will be the one remembered once you've seen this movie." Chariton's freethinking spirit will not be crushed by the fascist military after their 1967 coup d'état, embodied by Akylas Karazissis as the town's new military director Major Dimitriou. Add their mutual love interest Eleni (Nafpliotou), the school's beautiful new math teacher, and a tangled, often comic, sometimes poignant erotic triangulation ensues. Fold in youthful narrator Grigoris (Stefanos Karadinakis, the director's son), with his Brechtian asides and the confusing challenge of his own budding sexuality, and the narrative weave is set.

The film's music—engineered by Nikos Platyrachos—is one of its main assets, if not its saving grace. The school choir—enthused by Chariton to dream for victory in the 50th annual Chorale Olympiad ("if you dream hard enough, God will see you")—finds itself in competition with the military choir who is trying to strong-arm their win, the milliner's chorus who exalt feminine desire, the railroad workers choir, and a trio of doo-woppers from the local post office. Whoever wins gets to take home a chocolate trophy Aphrodite. All their respective entries are entertaining. And this is not the film's only mythic referent as—towards film's end—Chariton channels Dionysos as an ever-dying ever-revivifying god of fertility. 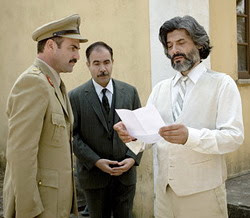 In an interview after the Thessaloniki festival, Karantinakis stated music was one of the most important elements of the film. "The film was made with one aim: To make a fairytale that we wanted to be part of. …Chariton, the main character of the film, along with his passion, also has a Slav temperament, since that is where he comes from. As for the reason we chose to shoot the film in Corfu, it is because the people there and, in general, the people from the islands in that region have a passion for music. Every place has its own specific characteristics, and this is what characterizes Eptanisa (a group of seven islands in the Ionian Sea), the love and passion for music."

In a separate interview with Panayiotis Panagopoulos for Kathimerini, Karantinakis admitted the deliberate influence from Russian and Georgian cinema and the homage to such filmmakers as Kusturica, especially in the randy, brawling poolroom scenes. But there's the broad strokes of Italian farce as well and a few poetic and wistful accents of magical realism. I'm confident the film's GFF screening will induce frequent laughter and even a few tears.