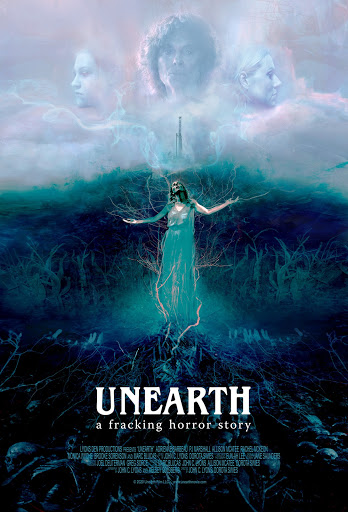 “A querencia is a place the bull naturally wants to go to in the ring, a preferred locality... It is a place which develops in the course of the fight where the bull makes his home. It does not usually show at once, but develops in his brain as the fight goes on. In this place he feels that he has his back against the wall and in his querencia he is inestimably more dangerous and almost impossible to kill.”—Ernest Hemingway, Death in the Afternoon (1932).

Boasting its world premiere at the 2020 virtual edition of the Fantasia International Film Festival (“Fantasia”), Unearth [official website / Facebook] is an American independent from Lyons Den Productions that gains traction as an eco-thriller in its first three quarters, then ramps up to full-on squicky horror in its final sequences. Billed as a “fracking horror story”, and co-directed by John C. Lyons and Dorota Swies, Unearth shuffles genre veterans Adrienne Barbeau (The Fog, Escape From New York, Swamp Thing), Marc Blucas (Buffy, the Vampire Slayer, the TV series) and P.J. Marshall (American Horror Story, Luke Cage, Mindhunter) with newcomers Brooke Sorensen and Rachel McKeon to effectively nuance the tensions between two neighboring families in rural Silverthorn, Pennsylvania whose relationships become strained when one of them leases their land to a natural gas company.

Sweeping aerial drone shots to connote emotional distance and a seemingly objective detachment are now nearly de rigueur for genre filmmakers to situate threats which, inversely, are frighteningly near at hand. From high above, cornfields appear green and geometrically ordered, but Unearth wastes no time joining the ranks of films that convert isolated American cornfields into sites of horror: Dark Night of the Scarecrow (1981), The Children of the Corn (1984) and its numerous sequels, Signs (2002), The Messengers (2007), etc.—I’m sure each horror fan has their own list—Unearth, however, eschews the supernatural underpinnings of horror to reveal more relevant monstrous forces ripped from the headlines: environmental degradation, corporate manipulation and the psychological trauma of heartland farmers facing bankruptcy and the collapse of their way of life.

"It’s so uncommon to see the plights of rural farming families depicted in cinema,” cites Fantasia Artistic Director Mitch Davis, “let alone in genre film.” Davis admires how Unearth addresses farmers’ vulnerabilities to being exploited. He opines that Unearth is “beautifully put together, vivid and compelling, with genuinely startling bursts of shock and atypical horror, and of course, the cast is just fantastic." Jenn Adams at Consequence of Sound adds: “Unearth is a timely metaphor in the midst of a pandemic which has crippled the US economy ... showing no difference between the threat lurking within the earth and the one that knocks on the door with a friendly smile and a clipboard." At Filmmaker, Jim Hemphill interviews the filmmakers and asserts unequivocally that Unearth is “one of the best films of 2020 in any genre.”

As George Lomack, Marc Blucas portrays a farmer / mechanic, estranged from his wife and raising his two daughters on his own, down on his luck struggling to keep his farm and family afloat against a crumbling economy; but, despite his best intentions, he is failing them. The failure of presumed traits ascribed to gender is in itself a form of horror as men become demasculated by forces beyond their control. Equally, women who are complicit in the failures of men who are meant to protect and provide for them, enable that horror. It’s telling that Christopher Shy’s (Studio Ronin) theatrical poster design emphasizes three generations of women in this narrative whose beings are intimately connected to the land they live on. It is reminiscent of Gustav Klimt’s 1905 painting “The Three Ages of Woman.” 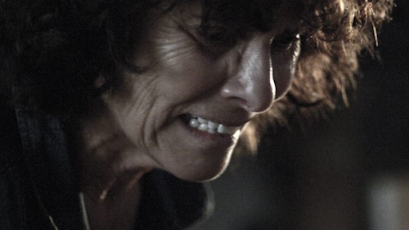 Lomack’s neighbor, Kathryn Dolan (Adrienne Barbeau), is the residing no-nonsense recently-widowed matriarch of the two neighboring families and is keenly aware that the remaining men in her clan are weak. Her son-in-law Tom (P.J. Marshall) is hostile to her daughters and ready to jettison the hard work necessary to maintain their farm. Kathryn likewise knows that Lomack is thinking of leasing his land to the fracking firm “Patriot Exploration” as a quick remedy to his financial woes. Once identified with her buxom sexiness, Barbeau has admirably evolved as an actor, delivering a sharply-chiseled characterization of a matriarch whose natural beauty is her fierce agency. It’s one of her best performances to date. Unable to convince Lomack to hold onto his land, and critical of his thinly-veiled affair with her daughter Christina (Allison McAtee), Kathryn can only watch in dismay as nearby drilling poisons the water table, pollutes the air and introduces parasites into the soil.

Suggested in this tension between George Lomack and Kathryn Dolan is what might, arguably, be considered one of the United States’ growing horrors: the collapse of the common good (whether through the use of land, or in the ways people treat each other). As the current administration seeks to do away with Social Security and Medicare by eliminating the payroll tax, the Dolans and Lomacks reflect in microcosm the discontent, desperation, greed and shortsightedness of our nation and demonstrate yet again how social and political issues can find expression and come to catharsis through genre.

Though Kathryn attempts to keep her family together by adherence to the land, emphasizing a collective partnership with her neighbors, individual needs undo her efforts to strengthen their community and commitment to each other. George entangles himself in a contract with Patriot Exploration and thoughtlessly threatens the livelihood of both families; Tom stumbles under the weight of his chores and rankles at his masculinity rendered ineffective by the independence of Kathryn’s daughter Christina; Christina, in turn, believes herself separate and superior to their farming lifestyle and—as evident from the film’s opening scene—fantasizes leaving the farm to become a professional photographer; George’s daughter Heather (Rachel McKeon) struggles with her illicit feelings for Christina, while her younger sister Kim (Brooke Sorenson) seethes in resentment at the personal sacrifices necessary to save family expenses. Offering the metaphor of the querencia (defined by the Hemingway quote above), no one takes heed of Kathryn’s warnings and weaken themselves through selfishness. 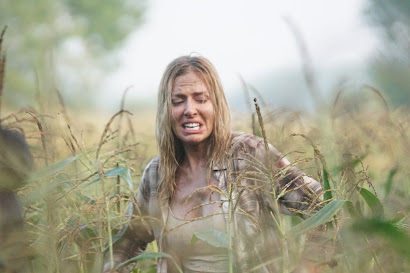 By referencing the querencia—a metaphysical concept in the Spanish language related to the bullfighting arena—Kathryn stakes out what she foresees as the families’ last stand (and, by extension, America’s last stand). The term querencia comes from the Spanish verb querer, which means "to desire." In bullfighting, the term refers to how a bull may stake out his querencia, a certain part of the bull ring where he feels strong and safe. Kathryn argues that—if the families stick together and fight the fracking company—they might be able to save their farms; i.e., their querencia. It’s a strong metaphor in an already bracing script co-written by Lyons and Kelsey Goldberg that uses smart character development to advance the narrative. If—as Kathryn suggests to Christina—that her aptitude for photography is intimately connected to the land of her upbringing, the intrinsic critique is that she might lose the fount of her creativity by moving away.

Further, staging a scene at a demolition derby, the writers create a tense sense that a collision is about to happen, exactly like a broadside car accident; but—as Uruguayan author Eduardo Galeano has poignantly proposed—there is no such thing as a car “accident.” Instead, Galeano suggests they be called “consequences”. Concomitantly, it is no “accident” that vehicular emissions are ushering in global warming; that environmental disaster is yet another consequence of our culture’s misguided reliance on fossil fuels.

Integrated naturalistic performances by the ensemble enhance the script and demonstrate that disaster does, indeed, ride on fear. A year after George leases his farmland to fracking, the land shifts—seeping poisons and a parasitic hazard into the water table—and the water becomes the transformative agent that provides the horror of the film’s final quarter. Earlier, I mentioned how Adrienne Barbeau’s performance revealed a maturation of her craft, but—allegiant to the excesses of genre—Barbeau bravely satisfies her fans by being the member of the cast who we witness transform into something that looks like a potato that has been left in a root cellar too long. This horrid physical transformation coupled with (or, again, as the consequence of) hallucinatory psychosis induced by the parasitic water and polluted air introduce a vagueness to this cautionary tale. Are these physical transformations actually happening or are they being imagined? I’m not sure it really matters. The horror is visualized. Through cross-cut edits certainties are unmoored in Unearth and physical trauma is layered upon and conflated with psychological trauma, compounding both.

Although scholars of folklore discount as baseless the speculation that the childhood rhyme “Ring Around the Roses” references the Great Plague of England (1665), it is a presumption that has gained popularity since after World War II. Monica Wyche’s character Aubrey Dolan mutters the jingle several times under her breath as water poisoned by fracking begins to sicken the two families. In a scene where Aubrey is rinsing an infected wound on her hand, she begins to sing the jingle. It’s perhaps no more than a curious coincidence that—in March of this year, during the early stages of the COVID-19 pandemic in the United Kingdom—the British current affairs news magazine Private Eye jokingly proposed that the traditional rhyme was the "ideal choice" of song to accompany hand-washing in order to ward off infection. It’s scriptural touches like this that make Unearth such an interesting film, leaving viewers with questions and thoughts hovering like gas fumes over poisoned cornfields, and adding menace to the simple act of harvested produce being transported to market. The film’s final shadow-dappled image proves disquieting.

Unearth has an encore live screening at Fantasia on Sunday, August 30, before serving as the Opening Night film for Germany's Hard:line Film Festival on September 23. With its first screening at Fantasia, Unearth secured international representation by the Paris-based sales company Reel Suspects. The filmmakers retain domestic rights. Photos courtesy of Unearth Film LLC.