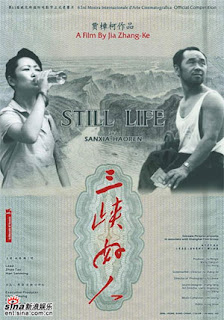 Though I was not pleased to read at Text of Light that the print of Jia Zhang-ke's Still Life that Max Goldberg caught at its weeklong run at the Roxie Film Center "had evidently been around the block a few times", I was heartened that Max nonetheless appreciated Still Life's resemblance to Antonioni's films: "[W]here Antonioni's figures are existential drifters, Jia's are actual migrants—a more physically vivid vision of dislocation. Both directors like the idea of a fruitless search and both find something colossal in ruins and large-scale urban decay, but Still Life's lament isn't airless in the same way as Red Desert or L'eclisse." Max likewise felt empathic resonances with the news of the Sichuan earthquake. The film's images—"composed in form; raw in subject"—looped in his mind along with the radio reports, becoming inseparable. As if to enforce the resonance, he placed production stills from Still Life alongside photographs from The New York Times coverage of the damage in Sichuan.

It's perhaps best that Max's Text of Light entry went up after my San Francisco International Film Festival 75-words hold review. Including it there might have tipped the balance. 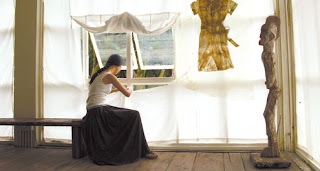 Yerba Buena Center for the Arts has now officially announced the local premieres of Jia Zhang-ke's newest films—Dong (2006) and Useless (2007)—screening June 5 and June 8. Dong ("east" in Mandarin) is the companion piece to Still Life, in which Jia "beautifully explores the possibilities of documenting life and art." With the Three Gorges serving as a stunning backdrop, Jia follows Liu Xiao-dong—one of China's leading painters—as he paints two portraits: one of laborers at the Three Gorges dam and one of young female models in Bangkok. "As with much of his other work, Jia examines fantasy, landscape and the underlying realities of ordinary people caught in a whirlwind of rapid change."

Useless examines the "spiritual life" of the Chinese clothing industry—the largest exporter of garments in the world. "First an assembly line in Canton, where under the thunderous noise of sewing machines women work silently. Next we meet acclaimed Chinese designer Ma Ke, launching her handmade anti-fashion clothing line in Paris. Finally we spend a dusty afternoon in Fenyang in a tiny tailor's shop." 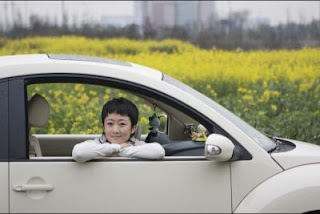 And just when it seems San Francisco had belatedly caught up to Jia's output, along come the reports from the recently-wrapped Cannes Film Festival—compiled by Dave Hudson at The Greencine Daily—that 24 City evocatively continues Jia Zhang-ke's concern with the onslaught of change in China. Echoing Max Goldberg, Anthony Kaufman dispatched to indieWIRE that "Jia's poetic vision of demolition and progress takes on disturbing new resonances after the recent earthquake that killed thousands of people in the same area where the film takes place. One has to wonder whether 24 City, the high-rise luxury apartment complex that has replaced Factory 420, is still standing." 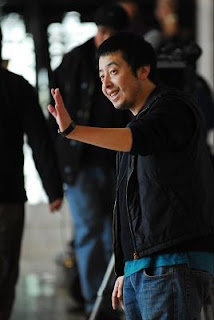 San Franciscans should keep their fingers crossed that 24 City will be included in YBCA's Jia Zhang-ke retrospective scheduled for their 2008-2009 program (dates to be announced). The retrospective falls under the calendar year's topical aegis "Imagining Our Future." Imagining the unknowable and driven by a sense of urgency about the future, Jia Zhang-ke's oeuvre deals with themes of youth, contemporary Chinese history and globalization, with a minimal yet realistic aesthetic. His work speaks to a vision of "authentic" Chinese life, and his consistent return to the themes of alienation and disorientation fly in the face of the work of older filmmakers who present more idealized understandings of Chinese society. 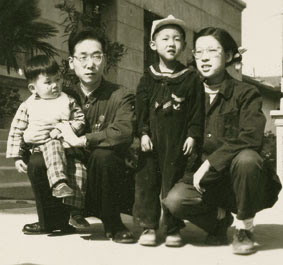 As mentioned earlier in my interview with YBCA film programmer Joel Shepard, YBCA will further their focus on Chinese film with a September residency of radical documentary filmmaker Wang Bing, whose work examines China's past in an attempt to understand its future. Fearlessly delving into buried chapters of China's communist history and shattering the boundaries placed around personal memory, his latest film—Fengming, A Chinese Memoir—is being heralded as a remarkable cinematic hybrid. At once a devastating portrait of an era, a conceptual art piece and a fateful love story, Fengming is a riveting confessional by a woman who survived the horrors of Mao's China.
Posted by Michael Guillen at 5/27/2008 10:02:00 PM