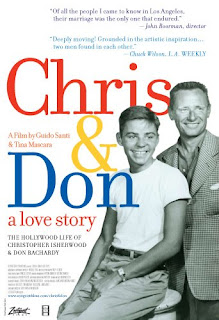 "We don't need no piece of paper from the City Hall keeping us tied and true…"—Joni Mitchell, "My Ol' Man"

Historically, the California Supreme Court's recent decision affirming gay marriage—while good news—doesn't take away much from the countless couples who committed themselves without sanction in decades past; the intergenerational partnership of Christopher Isherwood and Don Bachardy being perhaps one of the most infamous, if not controversial. That lifelong partnership is affectionately documented in Guido Santi's and Tina Mascara's Chris & Don: A Love Story (site), which Variety's Robert Koehler describes as "focusing on the texture and sweetness of a particularly beguiling real-life gay love saga."

At The House Next Door, Keith Ulrich—fortunate to have been one of Bachardy's models—discerns that the film's "overall sense" is "of an ultimately unbreakable love's consecration." On the other hand, the disdain of Ulrich's cohort N.P. Thompson for "the dreary obsession elderly queer men have for young male flesh" and "the predatory (is there any way that it can't be?) relationship" (what he calls a "sycophantic love-fest") between Isherwood and Bachardy—colors his "review" with a shade just this side of homophobia, though it's perhaps best to simply call it unkind. Enthused by his condemnation, he actually mentions the documentary here and there. 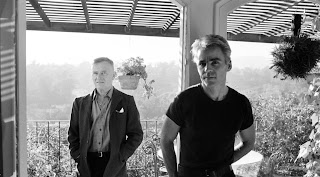 Thompson's arched and disapproving eyebrow is hardly solitary, however. Even Dr. Evelyn Hooker—Isherwood's landlord at the time he met Bachardy—expressed disapproval of the relationship, necessitating their evacuating his beloved garden cottage. So much for praising the social adjustment of self-identified homosexuals. And Joseph Cotten—who the documentary suggests would never dream of confronting Isherwood directly—was fond of singling Bachardy out at parties to dispense vitriol about "half-men." 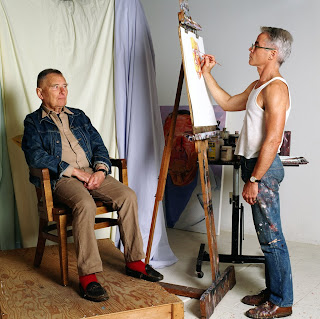 The documentary is composed of an astonishing wealth of home movie footage and archival photography; interviews with Leslie Caron, John Boorman "and even Miss Liza herself" (as Rod Armstrong understates it); and tender and insightful animated sequences where Isherwood and Bachardy's animal alter-egoes—an old horse and a young cat, respectively—reveal the complicated and nuanced dynamic of their love for one another. The film's final animated sequence confirms the necessary belief that love conquers death.

06/30/08 UPDATE: Kevin Thomas interviews filmmakers Guido Santi and Tina Mascara for The Los Angeles Times. I genuinely regret not feeling up to interviewing the two of them when they were in San Francisco attending Frameline, and especially missing the chance to meet Don Bachardy. I had wanted to ask him about William Goyen, having recently become aware that Bachardy's drawings of Goyen are in the UT archives in Austin.

In retrospect, I think what has always impressed me the most about the relationship between Christopher Isherwood and Don Bachardy is precisely the provocative charm of their intergenerational romance, no matter how it makes tongues wag and cluck. As a young man, I was repeatedly more attracted to older men than men my own age precisely because they afforded sociality and the advantage of experience. As much as N.P. Thompson would like to color this as recruitment on the part of "the dreary obsession elderly queer men have for young male flesh", the truth remains that—as a young man in my late teens—I was the aggressor in these seductions. For fear of repercussion and scrutiny, older men would try to veer away but I was the one in relentless pursuit. I would have my experience! The hunger of my youth would not be dissuaded. 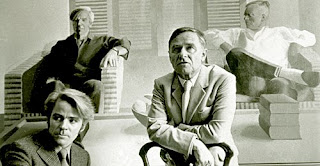 It's a complete misobservation to presume that the innocence of youth cannot coexist side by side with determined calculation. The truth is as well that the pleasure my older lovers derived in being pursued by someone younger was not just about my "young male flesh"—though I'd like to think that was of some commerce at the time—but, more about being valued for their life experience and being offered the opportunity to share their accrued privilege and wisdom. Now in my mid-50s, I find myself sometimes inversely fantasizing on the same. Admittedly, I would never chase after a young man; but, if he came chasing after me, I would probably slow down to a sauntering stroll to see what it is I might possibly give him to help him individuate. Nothing is more wonderful than helping a youthful soul unfold. In the case of Chris and Don, this is eloquently expressed. Christopher Isherwood helped Don Bachardy become a creative spirit. If that isn't the ultimate love story; I don't know what is.