The press conference for Frameline 32 was held early Tuesday morning at the Castro Theatre, where the line-up was announced. The festival will run from Thursday, June 19 through Sunday, June 29, 2008. Program listings are available at the festival's official website. Of particular note is that Frameline's Artistic Director Michael Lumpkin—who has served Frameline since he first volunteered in 1979—is moving on to "new adventures". In recognition of his seminal contribution of the past 29 years, Lumpkin is being awarded the 2008 Frameline Award and this year's line-up includes a "best of the fest" retrospective sidebar of Lumpkin favorites. Also, AT&T has signed on as a major sponsor to the festival and will be bringing back the Festival Pavilion where filmmakers and audiences interact over intensive Q&As.

In my mid-50s I have become that odd creature—the aging gay male—wandering in an imaginary city of white walls upon which one frenzy after the other is projected. Death watch narratives are ordinarily too close to home for me to weather, even as I recognize their importance in a culture that offers rare guidance in and around the death horizon; a culture, in fact, that dehumanizes death for efficiency's sake. 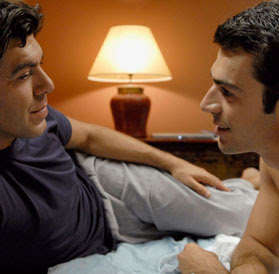 Ferzan Ozpetek's Saturn In Opposition—part of Frameline's World Cinema slate and picked up with customary prescience by Strand Releasing—not only navigates through rogue waves of grief, but offers narrative strategies of survival; not the least being the affirming company of friends, enacted by a handsome, character-driven ensemble that serves the script's depth with dignity and a keen recognition of grief's dark sheen. I'm muzzled by hold review and can't say much further until the film's theatrical distribution when I anticipate praising the film in the fullness it deserves. Suffice it to say that Saturn In Opposition is mature, intelligent, nearly necessary filmmaking with a score that harbors some of the most imaginative and evocative usages of Italian pop music this listener has heard in some time. 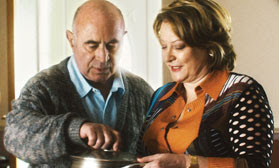 By contrast, Jan Dunn's Ruby Blue sullies grief with thematic distractions that lead protagonist Bob Hoskins into deep pigeon shit. The death of his wife early in the film is quickly trivialized and his grief caricatured as unshaven and unkempt. All it takes is a precocious little girl moving in next door, an attractive female neighbor with suspiciously large hands, a boozing delinquent who's got his eyes on a fishing boat, an embittered son who shifts from hatred to forgiveness in the near blink of an eye, and all vestiges of authenticity trip up over tangled narratives. The film takes flight and returns to roost as frequently as Hoskin's pet pigeons. As for his wife's cremains? They're forgotten very early on. She, in effect, never really existed; which is to say that the grief isn't very real either. As far as I can ascertain, Ruby Blue is not on hold review. Ironic, since I have little to say about a film that says very little even as it heaps way too much on its plate from the smorgasboard of hot button issues.
Posted by Michael Guillen at 5/21/2008 02:08:00 AM