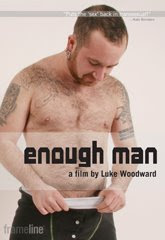 Ever since Jed Rosenthal Bell opened up my eyes (and my heart) to the transmen experience, I've welcomed the opportunity to learn more. That opportunity arrives free of charge as Frameline at the Center inaugurates its third season with a screening of Enough Man on Thursday, April 12 at 7:30PM at San Francisco's LGBT Center, 1800 Market Street, San Francisco.

Documentary meets explicit sexuality in Luke Woodward's groundbreaking debut video about body image, relationships, sex and sexuality from the perspective of nine female-to-male (FTM) transmen and their partners. Featuring health educators, college students, sex workers, activists and artists, Enough Man navigates the terrain between objectivity and personal identity, allowing viewers into some of the most personal and rarely discussed areas of transgender life. By, for, and about FTMs, Enough Man is at once sexy and political, punchy and poignant.

Seating will be limited so early arrival is recommended! There will be a post-screening discussion with Luke Woodward. Frameline at the Center's screening of Enough Man is proudly co-presented by: Center for Sex & Culture, Fresh Meat Productions, Tranny Fest, Trans March and United Genders of the Universe. Enough Man will be available April 10 through Frameline Distribution. The DVD includes half an hour of deleted scenes.
Posted by Michael Guillen at 4/05/2007 11:37:00 AM

Saw a personal appearance by formerly SF-based, lesbian activist/filmmaker Barbara Hammer last night. What an inspiring person! You've probably seen this 50 times more than any of us, but seeing and speaking with artists in person is a rich experience, of a different quality than seeing their work. A charismatic person can directly speak to our own lives and the way we conduct them...

Anyway, she was great.

Thanks for popping up to say hi, Girish, it's always welcome, whether on-topic or not. It soothed me because I was just beginning to think I'm writing too much and no one has time to comment anymore, let alone keep up with the entries. But it's not my fault, really. I blame San Francisco and its rich, living cinematic culture.

Where so many film lovers are happy just to see obscure films that rarely get distributed, here in San Francisco there this is added privilege, luxury nearly, of filmmakers attracted to the Bay Area's regional hub to promote their films.

As it has always been the sociality of film culture that fascinates me the most, this proves to be wonderful and calendrically challenging at the same time. I agree 100% that the opportunity to hear a filmmaker speak about their own film(s) laminates an appreciation on the film experience that is a unique fortune. It is my complete focus. For example, when choosing films for the SFIFF50, I tend to favor those where I know the talent (either director, screenwriter or actor) will be in attendance. For me it's about the journalism, with an emphasis on the personal journal.

That the personal journalizing of social cinema then becomes of value to those who read the transcripts validates all the labor put into transcription and allows me to feel that I am contributing something to the field of cinematic letters.

Between the two of us; you with your erudite eye to the inner workings of film and me to the film's social life in the festival circuit, we--as the nursery rhyme goes--lick the platter clean.

Thank you for stopping by to offer your impressions of Hammer. My best.

What a cool coinage! I'll have to remember to use it...

And one day, Michael, your interviews will also (without doubt) be collected into book form and your influence and contribution to film culture will be that much larger for it!