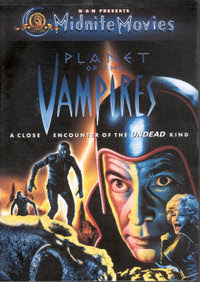 There were a couple of things that sprang to mind at last Sunday's "Sleazy Sunday" triplebill. First, Bruce Fletcher lies through his teeth. He had me thoroughly convinced that he had secured the best print in the world for Mario Bava's Planet of the Vampires. The lights went down, I leaned back, and wham, pinkout with green scratchy lines. It was like some kind of mod madras plaid. Of course, this is absolutely appropriate—I dare say atmospheric—when it comes to emulating (simulating? stimulating?) grindhouse. That and the people walking in and out of the movie as they damn well please.

So then a few days later I went to watch the Tarantino/Rodriguez Grindhouse vehicle and I kept musing on how the two of them spent $50,000,000 to achieve the look that time and various Sleazy Sunday festivals had done to the Planet of the Vampires print. I'm here to say that Planet of the Vampires was much more realistic and convincing! Talk about throwing good money after bad…. 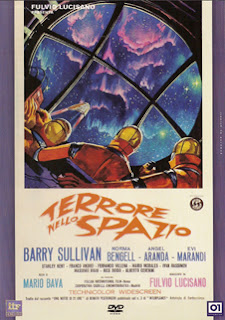 Secondly, it's very interesting to watch bad movies in a moviehouse with people who appreciate bad movies. If they're really bad, people are catcalling and wiggling around in their popcorn, tossing out wiseacre comments and pretending they're the new hosts of Mystery Science Theater. It's all great fun. But here's the thing. It's also a very sensitive issue because, for example, the first film last weekend was this atrocious thing called War of the Robots that had more horrible blonde pageboy wigs than I've ever seen in my life, other than maybe Village of the Damned and its various sequels and remakes combined. It was easy—effortless—to make fun of that movie. Then comes Bava's Planet of the Vampires, which all of a sudden quieted the audience down. Because, despite the plaid print, it was too good, goddammit!!

Anyways, Neil over at The Bleeding Tree has been kind enough to let me offer up my first two "Sleazy Sunday" reviews—Starcrash and The Dunwich Horror—to his ongoing Trashy Movie Celebration Blogathon. I really wanted to take part and really didn't want to write anything new. I have just enough energy, however, to fully recommend this indulgence—nay celebration!—of all those films that are coming back around again. I'm a firm believer in recycling trash; aren't you?