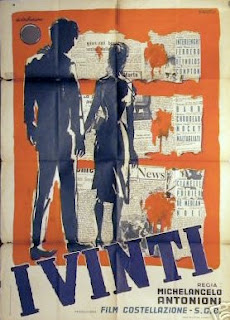 Returning home to Miami via San Francisco after five months in Thailand, Peter Nellhaus and I met briefly for PFA's first Antonioni shorts program yesterday afternoon. We didn't have a whole lot of time to talk as I had to head off after the shorts program to get back into San Francisco for Sleazy Sundays at the Victoria; but, at least I was able to buy him a ticket to see I Vinti (1952), which he's reviewed at Coffee, Coffee and More Coffee. 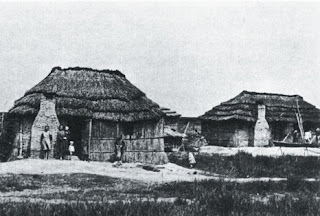 The Antonioni shorts program was hits and misses. Gente del Po (The People of the Po, 1943-47) about a barge boatsman, his wife and their sick daughter; allegedly prefigures Il Grido (1957) (which, admittedly, I haven't seen though—if you read Italian—a comparison has been made between the two at Cinemateque.net). Its confluence of the sweet waters of the Po and the acrid waters of the Adriatic didn't do all that much for me, despite the short's lustrous black and white cinematography.

N.U./Netezza Urbana (Sanitation Department, 1948) chronicled the lives of streetcleaners in Rome. Though dark and somewhat underexposed, this short intrigued with its depiction of the heedless littering of upper classes cleaned up after by these working class heroes. The film was accompanied by a bluesy jazz score by Giovanni Fusco, which juxtaposed interestingly.

I very much enjoyed L'Amorosa menzogna (Lies of Love, 1949), a fascinating study of the "stars" of the fumetti—photographed comic strips—popular at the time in Italy. It held some delightful comic touches. 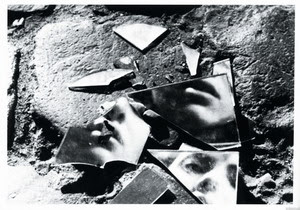 I equally enjoyed Superstizione (Superstition, 1949) for its laundry list of bizarre rural southern Italian superstitions including drinking an infant's piss to cure arthritis and burning a viper in a campfire until it's ash and then sprinkling the ashes on the threshold of the house of someone you want to hex. This is the kind of film that gives me ideas.

La Villa dei mostri (The Villa of Monsters, 1950) arrived in Italian with French subtitles and—though Susan Oxtoby claimed it was a great opportunity to focus on Antonioni's visual compositions—I used it as a quick opportunity to catch some zees. I'm only human. 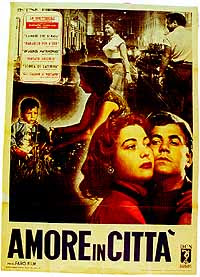 Tentato suicido (Suicide Attempt, 1953), Antonioni's contribution to the L'Amore in città (Love in the City) portmanteau of six Italian directors, including Fellini, only reminded how love isn't always the best thing for you, especially when it goes sour. Fernando F. Croce has written some notes on the omnibus at Cinepassion.org.

Vertigine (1950) takes the viewer on a tram over what appears to be the Italian Dolomites. It reminded me of a similar experience I took on one of my first European sojourns and reminded me of how I worried the cable would snap. I fearfully imagined myself impaled on the tip of a pine tree. I can't find any information on this four-minute short, though it seems to reflect Antonioni's interests in these devices at the time. In the same year he did another 10-minute short La Funivia del faloria (The Funicular of Mount Faloria, 1950), so perhaps Vertigine was likewise filmed at the Cortina d'Ampezzo, Belluno, Veneto, Italy.

Finally, Sette canne, un vestito (Seven Reeds, One Suit, 1949) was a thoroughly engaging short documentary on the production of rayon, shot (again) in both the Po Valley and Torviscosa, Italy. In league with his profiles on the working class, Seven Reeds, One Suit seemed most like a true documentary to me. Its title alludes to the fact that it takes seven reeds to make one fabulous dress. The process is convoluted and chemical and I couldn't stop wondering who came up with this and how they figured it out in the first place. As a study of industrial ingenuity, it proved thoroughly informative. The IMdb user comment on this film is a handsome overview of Antonioni's early work.

I watched three of these today, and preferred Gente del Po (seemed the most controlled of the three, and some very nice compositions) to both Netezza Urbana (loved the music, which you have thankfully given me the composer of, as well as the last shot) and, especially, Superstizione (which, as odd as the superstitions may be, wasn't all that exciting as film).

I did watch them in Italian with no subtitles, though, so the narration didn't mean much to me.