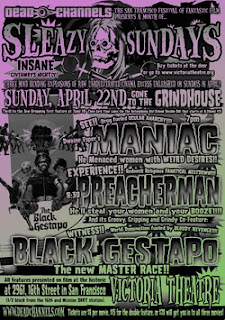 Dennis Harvey's masterful SF360 summation of this past month's Sleazy Sundays series and the pervading grindhouse mania that's crept into programming in nearly every major urban center in the States warrants a shout-out. It's a fun read, not the least for listing some of his most memorable moments at the Strand Theatre here in San Francisco. When Roxy Music sang, "Do the Strand!", they didn't know it was being interpreted so idiosyncratically down on Market Street. My favorite moments at the Strand (that I'm willing to admit): a John Waters retrospective where I first saw Female Trouble; a David Cronenberg retrospective where I first saw Rabid and Brood; escaping the rain one day to watch a movie I knew nothing about, something called The Terminator. Then there was the time I was terrified by a paper bag on one of the seats next to me. It had been left behind by some previous patron and—as I watched the movie—the bag moved all by itself. I was too terrified to do anything but look at it, increasingly distracted from the movie I had paid good money—well, cheap money—to watch. Anyone else have some good Strand stories?

Dennis also profiles the final triple bill in this month's series: Maniac, Preacherman, and Black Gestapo. All in all, Sleazy Sundays has been a fun series and Dead Channels deserves something—maybe their comeuppance?—for indulging us our flashback to the sticky '60s and '70s.

But don't think the mania's over yet!! Joel Shephard, film curator over at the Yerba Buena Center for the Arts, has booked "Broken Speakers and Broken People: A Real Grindhouse Double-Feature" on Thursday, May 10, at 7:30 & 9PM.

Joel writes: "In (a little belated) celebration of Grindhouse, Quentin Tarantino and Robert Rodriguez's tribute to the sleaze-pits of yore, here is a double-feature of fucked-up, freaked-out and forgotten 70s exploitation films. Rather than a studied re-creation, though, this is the real thing. In true exploitation scam tradition, I've decided not to announce the titles in advance, you'll need to trust me and just show up. I promise, though, that you will not be disappointed . . . suckers!"

Joel, baby, this has nothing to do with trust and everything to do with drooling unbridled curiosity!! I can hope for "roughies", can't I? See you at Sleazy Sundays and Broken Speakers/Broken People!