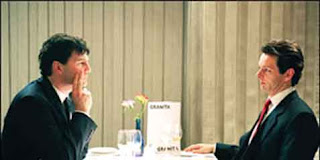 Recently—munching on boulangerie pastries washed down by freshly brewed coffee to fuel our conversation—David Thomson and I discussed some of his upcoming ventures, not the least of which is his onstage appearance with Peter Morgan during SFIFF50 to help present this year's Kanbar Award and to introduce and discuss Stephen Frears' The Deal, scripted by Peter Morgan. Though Thomson has not yet met Morgan, their onstage interview should prove candid and informative. It takes place Saturday afternoon, May 5, 1:00 PM at the Sundance Cinemas Kabuki.

Along with having provided the program capsule, David Thomson has likewise penned "Kings, Queens and Screenplays", a profile essay on Kanbar recipient Peter Morgan. As if that isn't enough to motivate interest, I still wanted to know why audiences should go see The Deal.

David Thomson: Well. The Deal is a very good film, which only escaped being shown in this country because the powers-that-be said, "Well, there aren't enough people in America who understand the density of British politics enough to follow it." I think that's silly. It's worked out very fortuitously in that we're only months away from the moment when Blair will step down. So "the deal" is going to get its payoff, which is fascinating.

But I suggested showing it because it's never played here at all and because its method is very like that of The Queen in that they did a great deal of research talking to the people involved in the real situation and then turned it into a drama. Also, it's the same actor [Michael Sheen] playing Tony Blair in the two [films], who of course is the same actor who plays David Frost in the Frost/Nixon play so he's very important to this movement. Those are the reasons why. But I would say basically go see [The Deal] because it's smart as hell, very funny, and tells you a great deal about British politics.