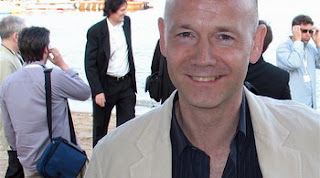 When Graham Leggat appeared on the San Francisco Film Society scene after its members had been subjected to the inept tyranny of his predecessor, there was good reason why the SFFS membership was cagey. We were all muttering amongst ourselves nervously, "Is he a good witch? Or a bad witch?"

Well, it turns out that Graham Leggat isn't a witch at all, but an accomplished, professional and personable Executive Director, committed to his San Franciscan constituency. Helming the longest-running festival in the Americas, Leggat has recognized that civic pride is a strong asset to help him steer SFIFF into the future.

Appearing last night on the Castro stage for the festival's opening night feature Nuovomondo (Golden Door)—beaming with enthusiasm and whirling microphones as expertly as any gunslinger—Leggat offered introductory remarks.

Acknowledging first the hard work of his seasonal festival staff, Leggat brought Linda Blackaby to the stage, who he characterized as the "unsung hero of the Film Society, who has kept its curatorial integrity through the lean recent years" (a euphemism for the aforementioned reign of terror). With astonishing and graceful brevity, Linda accepted the tip of the hat and relinquished the microphone to let the proceedings commence.

"When people told me when I came out here last year for my first year that the festival had lost a step or two, all I had to do was open the program catalog and see the extraordinary work that Linda had been doing all along to tell them they were wrong. We're really glad that Linda has held the festival together over the last several years and for many years to come, I'm sure."

Naming off the "colossi" who have "built and sustained this exhilarating festival for more than five decades", the energy of said guardian angels and patron saints informs "tens of thousands of others who have contributed to the International's aesthetic integrity, civic significance and financial health. They have done so—like us—with pleasure, hopefulness and determination."

Leggat further asserted, "The credit for this International and the 49 festivals that have come before us radiates far and wide beyond this court room throughout the city, across the country, and around the world and we owe a debt of thanks to a world-wide republic of collaborators: to the enthusiastic sponsors and partners of the festival; to the many talented filmmakers, producers, distributors, and publicists who have trusted us with their works; to the scores of energetic presenters in the Bay Area who share our love for unconventional work and support our desire to bring diverse audiences together under one roof; to the dozens of consulates and international groups whose mission it is to bring the world to San Francisco year round; to an enlightened city government and film commission under the leadership of Stephanie Coyote; to the Grants City Arts Program and the Hotel Tax Fund and the many foundations that support us; and also, of course, to the print, television, radio and online journalists who have covered us enthusiastically and with great intelligence over the years; and, of course, to you, our loyal, devoted audiences, especially our Film Society members.

"If the International is, as I believe, beloved by the City—and I do believe that—it's because a whole city of San Franciscans have been an integral part of its life. For more than half a century all of you, and those before you, have fed and cared for us, taught us how to behave in public, and watched with pride and pleasure as we've grown into one of the world's finest film festivals. Now, in this landmark anniversary year, the San Francisco International is the flagship film festival of the Americas.

"The staff and I also feel—and we hope that you will agree—that this year's International is extraordinary not only for its historical significance—what we think of as the rich, buttery taste of the golden anniversary—but also in and of itself. In our book it's not enough just to turn 50, as our older members of the audience would testify. Just turning 50 might be the result of mere obstinance. Instead, we have aimed this year to present the 50th International that is both equal to any that has come before and is, in many ways, a peerless culmination of half a century of excellence."

Crediting the festival's partners and sponsors (with a singled-out shout to Ruthe Stein's 50 days of coverage at SFGate), Leggat then moved on to thank the Italian Cultural Institute and the Consulate General of Italy for helping to present the opening night feature Golden Door, which he introduced accordingly: "We didn't commission this film; but, we might have. The fact that we have a film called The Golden Door—where the characters in this touching immigrant saga find themselves moving from the Old World, from a superstitious Sicily to the mixed blessing, perhaps, of the New World but certainly to the future—resonated with the programming staff when we were looking for just the right film to open the International on our 50th anniversary. It's a film about sacrifice, about hope, about forgetting, and as we enter our 50th year we are looking forward through—as it were—the golden door of this festival to a future that is almost upon us in fact about one minute after midnight on closing night when we begin to build out in earnest a year round wide-reaching San Francisco Film Society. So this film has an important symbolic value for us but, beyond that, of course it is an absolutely extraordinary film in its own right.

"Emanuele Crialese has made three films now, this being the third, and San Francisco is the only festival that has shown all three films together. He's a great friend of ours and we're very happy to have him here. What's most wonderful about this film, I think, is that the immigrant saga is something of a chestnut in the film canon but this film reimagines the genre entirely. It has a wholly contemporary feel, such that—at the climactic moment on Ellis Island when Nina Simone breaks into song (anachronistically but nonetheless breaks into song)—you will feel as if this story of a hundred years before is your story. You will feel that this story represents every moment that you have felt where you have come to a momentous threshold and passed through and nothing in your life will ever be the same again. We are at this threshold at our 50th anniversary and we can think of no other film we would rather have as opening night than Emanuele Crialese's Golden Door."

Leggat then invited Crialese on stage and the film's lead actor Vincenzo Amato. Once the applause subsided, Crialese expressed that it was a very special night for him and for all those who participated in the adventure of filming Golden Door. Unable to secure funding, the project gestated for nine years. Finally, "before becoming completely bald", Crialese secured the financing for the project. The film, Crialese explained, is both historic and autobiographical. Had it not been for America, he would never have had the chance to become a director and flex his imagination. If he hadn't immigrated here from Italy he would most certainly have become a lawyer, not to disparage any attorneys in the audience. He was especially grateful to the San Francisco International because—when no one else wanted his first film—SFIFF accepted him. Time passed and five years later he was invited again. And now ten years have passed, he has lost most of his hair, and SFIFF has honored Golden Door by making it the opening night feature.