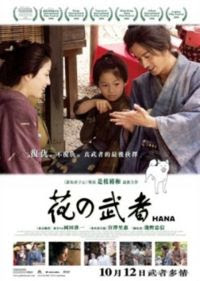 Yet another film I caught at the 2006 Toronto International Film Festival and which I'm pleased to discover on the SFIFF50 line-up is Hirokazu Kore-eda's Hana, co-presented by the Center for Asian American Media. Hana is an unexpectedly humorous and effective subversion of the samurai genre, veined throughout with Kore-eda's customary warm humanity. For being a historical period piece, it is brilliantly contemporary. Its comedy is achieved not only through an ensemble of randy and meticulously-drawn characters living in an Edo nagaya (tenement slum) in 18th century Japan, but by its purposeful upset of expectations regarding the samurai code. Kore-eda poses the question: Which is the more pathetic comedy? A samurai who is clueless at tracking and inept at swordplay? Or a samurai so driven by code that he forfeits the pleasures of being a husband and father? Kore-eda also asks: Who most honorably fulfills a father's dying wish to have his death avenged? A samurai warrior who interprets revenge as bloodlust and, if necessary, suicide? Or one who realizes that it is by teaching the young that the world is propelled forward? An admitted response to 9/11, Hana leans toward peace in times hungry for war.

Twitch teammates Todd and Opus have written fine reviews of Hana. Todd writes, "Kore-Eda has assembled a fine group of actors, many of whom have worked with him and with each other before, and the camaraderie is clearly evident on screen. The performances are universally strong, striking an admirable balance between humor and pathos, but what really makes it work is that you really believe that these are people who know and care about one another. …Beautifully shot, finely performed and brimming with life, Hana shows us a side of the acclaimed director that we haven't seen before, playful but still with a purpose." 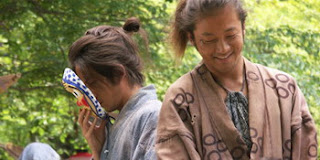 Prefacing that the film—although a period piece—addresses contemporary issues, Kore-eda was asked why he decided to set the film at the turn of the 18th century and what attracted him to the samurai genre? He stated that he initially came up with the idea after 9/11 when the spirit of vengefulness was at a peak. He wanted to make a film that addressed the theme of revenge, but, he wanted it to be a comedy or to have comedic elements. He envisioned a film about a samurai compelled by honor and code to avenge his father's death, even though he didn't really want to. Further, currently in Japan there is a resurging obsession with the samurai warrior code, which makes Kore-eda uncomfortable. He wanted to somehow address these patterns of vengefulness appearing once again in human history to comment upon how they interfere with peace.

Asked about the cinematic citation within Hana to Kenji Mizoguchi's Genroku chushingura / The 47 Ronin, Kore-Eda responded that people of his age usually watch this film about the tale of the 47 samurai who avenge their lord's death around the New Year. It's a tale very familiar to people of his generation.

With regard to the film's title Hana—which is the Japanese word for "flower"—Kore-eda explained that the film's full title is Hana Yori no Naho which roughly translates as "something more than a flower." Variety's Leslie Felperin tweaks that translation and says it actually means "even more than the flowers," which is "an allusion to the alleged last words of Lord Asano, who was referring to the fact that even more than the loss of petals in the wind, he regretted dying." The lord of the 47 ronin then committed suicide.

Throughout the film, Kore-eda associates samurai with cherry blossoms and queries whether the beauty of this equation is that samurai—like blossoms—must die. Kore-eda adeptly offers a counter-interpretation that what is beautiful about the falling of cherry blossoms is that they will return the following spring. Death, then, is seen as something like the middle of a long life and not an end in itself; certainly not a goal in itself, which is often the predictable trajectory of the samurai code and a predictability Kore-eda gently criticizes. In other words, as CineScene's Howard Schumann puts it, "Hana wants to change the symbol of the cherry blossom associated with the warrior spirit to one that represents a peaceful and nurturing life." Mileage will vary as to whether Kore-eda has succeeded in recontextualizing the metaphor, though his attempt to do is unquestionably timely and commendable.

Further, Kore-eda was asked if there was any significance to the fact that Soza's bird was named Hana and that it is eaten by a cat? Kore-eda complimented the questioner's hearing because the bird's name was indeed Hana but was not so named in the subtitles. He wanted the reference kept subtle and admitted he had, perhaps, his own reasons for naming the bird Hana, which he declined to expand upon.

One of the true delights of Hana, lending to its atmosphere of comic levity, is the film's music, which Kore-eda purposely selected to thwart the music customarily expected from samurai films. He employed a group of musicians to play antique European instruments from the 18th century to achieve contemporaneity with Japan.

Asked about the set design for the nagaya tenement slum in Edo (old Tokyo), Kore-eda admitted he has never done a historical scientific study of how many people lived in abject poverty at that time. He did discover that during that time they hadn't yet developed the technique for building houses on a slope so, in a way, the representation in his film might be inaccurate. Then again, his set design was in response to his frustration with how sturdy and well-built the houses of poor people are in most samurai films. He purposely encouraged his set designers to make the tenement slum as shabby as possible.

04/29/07 UPDATE: Cathleen Rountree's Greencine interview with Kore-eda—which she secured at 2006 TIFF—pivots around Kore-eda's reflections on community, memory and death. Kore-eda tells Cathleen that Hana was created with his mother in mind, as a cheerful film she could enjoy watching, even though she passed before the film's completion.
Posted by Michael Guillen at 4/09/2007 05:45:00 PM

Thanks for the heads-up, this is definitely on my list to see... it's so hard to come up a schedule for the festival.. I should develop a computer program to do the scheduling...

Didn't you see THE DEMON SEED?!! You can't use computers to do the scheduling; they'll TRAP you into something you don't want to see. No, no, no, Tony, you better stick to your human instincts.

Or hire a human like me to do the scheduling for you. But I'm terribly expensive and I don't think you'd be able to afford me. Heh.

As the godfather says "everything is negotiable" - wait, I think I just said that. :)

You did!! But then so did he! This is getting terribly terribly confusing....

I have a DVD copy of this film. I think my dad bought it last week, but I didn't really care about it until I read your review here. Dragging my little sister along (I lied to her that it'll be like the anime serious, Rurouni Kenshin), I watched the movie, and yeap, I think it's pretty good. Kinda slow and meandering at some parts, pacing could've been tighter, but other than that, it's great.

My little sister, who initially felt cheated, and was bored by certain parts of the film, conceded that the film was actually something she had never seen before.

Hey dude, thanks for swinging by to comment and that's neat that you're turning your sis onto arthouse fare.

Michael, Thanks for the great brunch gathering this morning. Sorry we stayed so long, but you're too good of a host! I've linked your fine review of HANA to my site Women in World Cinema, as well as to my coverage on the Jung site. See you at COLLOSAL YOUTH. Ciao...