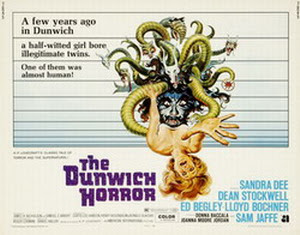 Through the choice casting of Sandra Dee and the unabashed rip-off mimicry of one of Roman Polanski's most successful films, The Dunwich Horror (1970) effects a theramin-saturated blend between Gidget and Rosemary's Baby. Of course, with its psychedelic cheesy effects and its hambone theatrics, one might as well call this The Sandwich Horror. Make mine to go. 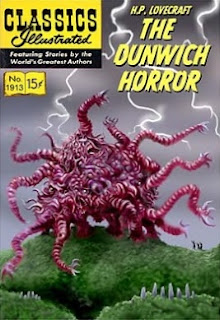 I actually saw this film when it first came out in 1970. At the time I recall being quite creeped out by its unseen menace, though that's not quite accurate. You "see" the many-tentacled menace but you don't quite know what you're seeing. It's rendered as a psychedelic version of what the director undoubtedly thought was a bad LSD flashback with stroboscopic colors and all that. But it's mainly the sound of it moving around behind the locked door that triggered my imagination to envision the worst. Later, I was drawn to The Dunwich Horror again when I realized it was based on a 1928 H.P. Lovecraft story considered core to his Cthulhu Mythos. I should specify it's very loosely based on Lovecraft's story. Wikipedia notes: "While the script borrowed some elements from Lovecraft, the final film bears little resemblance to the short story." 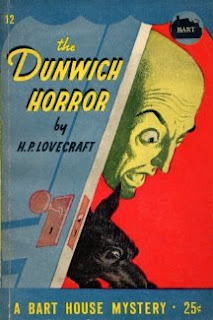 The Dunwich Horror is relatively well-produced, though that won't keep audiences from finding plenty to heckle at. There's Sandra Dee's puffy-cheeked acting to begin with. And Dean Stockwell's pre-Quantum Leap zanily deranged characterization as Wilbur Whateley whose fraternal motivations might have you wondering, "Whateley the heck?!" Nyuk nyuk. But if you really want a bad line to chew on, consider the company press release: "He lures a cute coed to the mountains for a weekend of demonic rites and wrongs!" Yessireebob, it doesn't get much better than that. As Professor Armitage, Ed Begley—the original—adds a certain cachet to the ensemble, if not a credence to the adaptation. Then there's Sam Jaffe after Ben Casey got through with him. In fact, as J. Read points out in his review at Monsters at Play: "This was the last film for both great character actors Ed Begley (12 Angry Men) and Sam Jaffe (Lost Horizon, Asphalt Jungle)." What a way to go, eh? 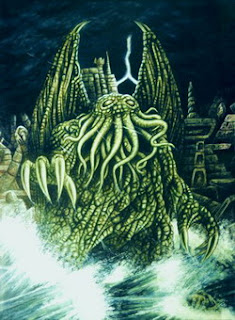 For further plot synopses I refer you to Monster Hunter's irreverent review, which might actually make a good stand-up comedy act. Then again, maybe not. Eccentric Cinema's write-up is probably a bit more composed and scores trivia credits for pointing out that scriptwriter Curtis Hansen eventually won an Oscar for penning L.A. Confidential. Foster on Film deserves mention for posing the important question: "What is more frightening than a disco sorcerer? How about a disco sorcerer who only speaks in a soft monotone?" And for describing Sandra Dee as "more of a '60s girl, so she was tired by the '70s." Ouch. Gerry Carpenter does a fair job of assessing what works and what doesn't work in the film at Scifilm and The Bad Movie Report reminds that you can hate a movie on a first viewing, even hate a movie on a second viewing, but appreciate a bad movie for what it is on a third viewing.

Incidentally, at Cinema Strikes Back, David Austin reviews the latest collection of films in a continuing series based on the work of H.P. Lovecraft. Included among them is a two-minute short called My Necronomicon, which is the very volume featured in The Dunwich Horror that spells recipe for disaster. 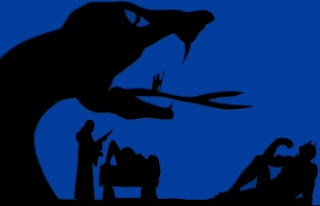 The Dunwich Horror plays tonight at 8:30PM at San Francisco's Victoria Theatre as part of the "Infernal Beaster" program for The Dead Channels "Sleazy Sundays" series. It's "sandwiched" in (why not drive a joke into the ground?) between Crimson Cult at 7:00PM and the hair-raising Werewolves on Wheels. Bah-ROOOOOOO!! Now granted, The Dunwich Horror has practically the exact same plot and similarly bad reviews as The Reaping—and it might be a real conflict about where you want to drop your tenspot this evening—but c'mon: Hilary Swank in The Reaping with your money going to the Metreon or Sandra Dee in The Dunwich Horror with your money supporting Dead Channels and the Fantastic Film Festival slated for later this summer?? It's a no-brainer, dude!!

04/09/07 UPDATE: This entry has been willingly sacrificed to the Trashy Movie Celebration Blogathon hosted by The Bleeding Tree.
Posted by Michael Guillen at 4/08/2007 11:04:00 AM