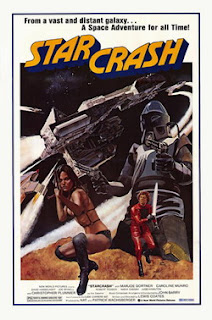 Is it just a coincidence that sleazy rhymes with cheesey? Little cattle little care. Dennis Harvey nails it in his Sleazy Sundays overview for the SF Bay Guardian: "These films were made for audiences, not for the private snickering of home viewers." Without question, what makes a bad movie good is an audience knowing and enjoying how bad it is! I've been appreciating screeners for Sleazy Sundays fare all week but I know I won't fully enjoy these flicks until I hear audiences groaning, protesting, and shouting out for more. Could they possibly protest for less?

Which leads me to the inaugural Sleazy Sundays capper Luigi Cozzi's Starcrash (1979), which Time Out calls a "trash-addict sci-fi spectacular" and Todd Brown at Twitch describes as "a landmark in the history of bad science fiction, so gloriously ignorant of just how horrible it truly is on every level that it becomes transcendent." Aw, he's just being nice. Though I have to agree with him 100% that Starcrash deserves "the MST3K treatment", which the Sleazy Sundays audience were more than willing to provide. I'll defer to the Twitch synopsis, which more or less covers all salient plot points. Though I have to admit the synopsis at Cool Cinema Trash lovingly fondles additional details. 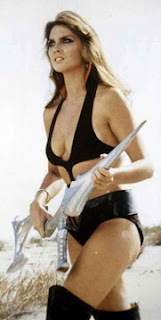 Her sidekick "L" (Judd Hamilton, her real-life husband at the time) is a robot with a twangy attaboy accent whose chrome head puts the steely back in Steely Dan and adds a whole new context to his description as Stella Star's "faithful companion." He's given the film's best lines, like when he's trudging through a field of ice and says, "It's times like this that I'm glad to be a robot." He also gets to be adorably chauvinist.

Actors have never had so much cheap scenery to chew nor the unprecedented opportunity to eschew some of the most contrived dialogue I've ever heard, which of course they don't. Some of them, in fact—I'm not naming Christopher Plummer by name—pad their "stunningly underwritten" parts with pretentious emphatic pauses that drive you near to distraction, especially when everyone's just about to get blown to smithereens. A galactic crisis is no time for iambic pentameter, Christopher. Either Plummer was "slumming for a paycheck" (as Mel Valentin tactly puts it at EFilmCritic.com) "or an all-expenses paid European vacation."

If you've actually taken the time to read the plot synopses hyperlinked above, you will know that—while searching for a missing spaceship—Stella Star & "L" visit several planetary systems, including a planet ruled by Corelia, Queen of the Amazons (Nadia Cassini). It's here Luigi Cozzi lifts the Tlalos sequence right out of Ray Harryhausen's Jason and the Argonauts (1963) but "creatively" differentiates it by adding a pair of breasts. Later another character produces a light saber that … gee … I dunno … does it remind you of Star Wars??? 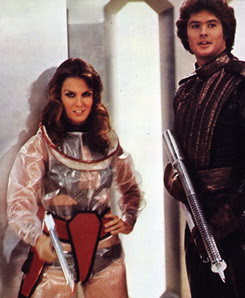 Once Prince Simon (David Hasseldorf) appears on the scene, you have to ask yourself: who's wearing more eyeliner? Him or Stella Star? This proves very important to Stella Star whose acting registers emotion by either widening her eyes or squinting them, often both at once. In one fabulous scene Stella Star's cohort declares, "We've just survived an attack by the most powerful weapon in the galaxy!" One beat. Two beat. Three beat. Drive your mac diesel through this space and park it in the back. Four beat. Five beat. Stella squeals excitedly, "Really?" Really, Stella. Now why don't you go swim in space?

Villain Zarth Arn's fist-shaped space fortress is expressive and, as Time Out notes about the movie in general, there's "a distinct lack of consideration for the laws of nature." Todd explains: "Building a fist shaped fortress to satisfy your own ego? Make sure that the fingers can clench and that you use standard plate glass windows on the command bridge. Assaulting said fortress? Don't do something useful like fire a weapon through said windows—which somehow magically keep the air from escaping even when shattered—oh, no! Fire torpedos loaded with live soldiers who can pop out and be slaughtered by the waiting army!"

John Gorenfeld's Salon essay on Starcrash contextualizes the film's place in the spaghetti space wars of 1979. "First Italians reinvented the western," he writes. "Then they reverse-engineered Star Wars." He has some killer trivia. Count Zarth Arn is played by "googly-eyed" Joe Spinell, producer of the infamous grindhouse template Maniac. Composer John Barry was moreoreless tricked into collaborating on Starcrash. Forestalling the truth of how poor the production values were for the film, producer Patrick Wachsberger (Vanilla Sky) showed Barry dirty black-and-white prints, claiming the effects weren't actually finished yet. Barry scored the movie, and long after Starcrash was forgotten, he recycled the main theme for Out of Africa, "making it a little less jaunty and winning an Oscar for his trouble."

04/09/07 UPDATE: This entry has been willingly launched into the Trashy Movie Celebration Blogathon hosted by The Bleeding Tree.
Posted by Michael Guillen at 4/02/2007 11:51:00 PM