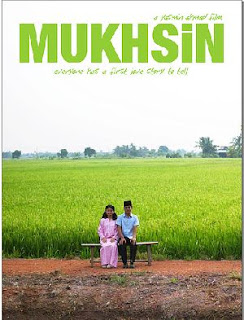 As the San Francisco International Film Festival was my first exposure to Malaysian cinema, it seems only appropriate that I single out that the 2007 SFIFF50 program includes the international premiere of Yasmin Ahmad's Mukhsin.

Yasmin's Mukhsin is the third in a trilogy of films that began with Sepet and continued with Gubra, which I mentioned in passing here on The Evening Class and Todd Brown reviewed more fully at Twitch when Gubra was first distributed, and then later when it transferred to DVD. Twitch team mate "The Visitor" likewise interviewed Yasmin. Most recently, Twitch team mate Stefan reviewed her latest Mukhsin.

At her own blog, The Storyteller, Yasmin provides the Wislawa Szymborska poem that "influenced the flavor" of Mukhsin, discusses the memories that shaped the structure of the film, and offers the presiding culinary metaphor of "green tea over rice" to provide insight into the film. It's a blessing to have Yasmin relay her impressions on her own creation. I regret so much that Yasmin is not expected to attend the festival as I had welcomed the opportunity to talk to her. 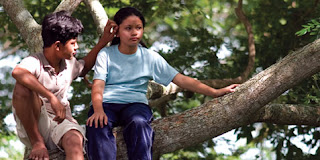 SFIFF50 is also presenting the Malaysia/Hong Kong co-production of Patrick Tam's After This Our Exile, which Todd Brown reviewed when the film made its North American premiere as the opening night feature of the 2006 Reel Asian Film Festival. After This Our Exile went on to win Best Feature Film at the 43rd Golden Horse Awards, among other honors which "The Visitor" lists in his report.

Clearly, I have relied heavily on Twitch to keep abreast of Malaysian cinema, especially since Koay joined the team; but, a cursory search at the site reveals an ongoing focus on Malaysian fare to which several writers have contributed. Since my last summary of reports from Twitch, there have been several new additions including The Gommorahizer's review of Puaka Tebing Biru, "The Visitor"'s review of Chermin, and his sad (though unsurprising) report on the Malaysian government's censorship ban of both Amir Muhammad's Village People Radio Show and Tsai Ming-liang's I Don't Want to Sleep Alone.

Countering the depressing news of censorship is the good news of alternate access. Amir Muhammad's The Last Communist is now available on DVD and several Malaysian films, including The Last Communist, are now available through Firecracker's TV service, which incidentally offers a free interview with Amir Muhammad on these ongoing censorship issues. Listening to Amir is always informative entertainment.

I was lucky enough to see Sepet two years ago and I was bowled over. I quite liked Yasmin Ahmad's style and she has some references to Sepet in Mukhsin. Example, in Mukhsin, she portrays the same lead couple from Sepet living in a country house. So that raises the question that is it just a random couple played by the same actors or is the same couple from that movie who moved to this location? The latter answer makes sense. I still have to see Gubra.

I thought After Our Exile had some raw emotions and was fascinating to watch. It left a lasting impression on me.

I was lucky enough to see two more Malaysian films this year -- Rain Dogs (Yasmin Ahmad stars in this film) and Love Conquers All. Both were interesting and in some ways tried to mimic HHH's style.
I am hoping to find more films from Malaysia in the future.

sorry for another comment but I just read the links you posted about Yasmin's trilogy. So it seems I missed the entire framework that links Sepet to Mukhsin :) Well now the light has gone on in my head and I can see the different pieces of a very beautiful puzzle.

No problem, Sachin; you're free to stop by and comment as frequently as you wish. I, too, often think in fits and starts.

Thanks for the recommendation of After Our Exile and I envy you your opportunity to see Rain Dogs, which I've heard so much about.

I haven't had my second cup of coffee yet; who do you mean by "HHH"?

Yeah I was being lazy there :) I meant Hou Hsiao-hsien. I felt Rain Dogs and some shots of Love Conquers All reminded me of Hou's Goodbye South, Goodbye.

Also noticed that I missed a word in the title, After This Our Exile :)