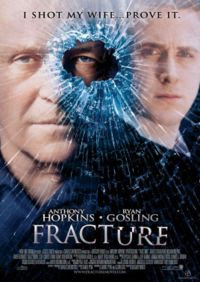 The cat-and-mouse scenario is skillfully reinterpreted in Fracture by the effective pairing of Anthony Hopkins as Ted Crawford—a structural engineer accused of the attempted murder of his wife—and Ryan Gosling as Willy Beachum—an assistant prosecuting attorney who mistakenly assumes he has a open-and-shut case only to discover his ambitions jeopardized in a keen battle of wits.

Anthony Hopkins has honed his performances of calculated criminals to the point where he could probably do these roles in his sleep, right down to the elegant hand gestures that connote his brilliant precision. Eschewing fava beans and chianti this go-round in favor of revenge served cold and ruthlessly beautiful, Hopkins retains charisma in his sinister cerebrics even if—as Justin Chang intimated in his Variety review—there's a sense of being served exquisite leftovers. Hopkins has become the Giorgio Armani of amoral criminality; impeccable, crisp, poised, smart. 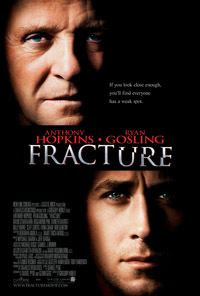 Ryan Gosling, on the other hand, with his rumpled dress shirts and loosened ties is nearly luminous with comic innuendo. His hotshot sexiness and seemingly insouciant and disheveled intelligence begin to burn quite darkly by film's end and I was pleased to see him follow up his celebrated performance in Half Nelson with a performance at least half as good, though again his moral dilemmas noticeably harken back to his previous performance. This actor can do more with a glint of humor in his eyes—and its removal—than most young actors working today, save perhaps Robert Downey, Jr.

Gregory Hoblit, who perfected his chops directing episodes of TV's NYPD Blue and L.A. Law, deftly paces a suspenseful script by Daniel Pyne and Glenn Gers. This taut crime drama with its courtroom sparring is fundamentally entertaining even if familiar, no matter how hard you might look for hairline fractures, as many probably will.

The poster - mediocre, dull, unrevealing - made me fear the worst, which was quite a considerable fear, since I admire both the lead actors very much. Your review has put me at ease.

Anthony Hopkins was once my favourite male actor. He used to be a serious actor with stunning nuanced performances in films like Shadowlands, Remains of the Day and Silence of the Lambs.

It seems since he moved to California several years ago, he has gone to pasture somewhat and become lazy in his acting, or as you say "he could probably do these roles in his sleep". And it shows (I haven't liked anything he's done since Shadowlands, or maybe Nixon).

I'm not particularly familiar with Ryan Gosling, other than his sterling performance in Half Nelson. I thought his performance was better than that film, though I think it's subtlety warrants another viewing.

Your description of Gosling, Michael, seems like a little like a reprisal of his role in Half Nelson. Now, I haven't seen Fracture - it gets released here in August so it'll be another couple of months or more before I see it - but your description does nothing to entice me to do so.

I find I'm getting more and more tired of formulaic (ie predictable) cinema. I want to be surprised by a film. I want to see some originality and some direction that pushes actors beyond the expected. In spite of any other positives, it doesn't sound like Fracture does that.

Tony, yes, I saw the film last night at its WOM screening. I saw you come in shortly before the film started.

Diana, Paul, thanks for stopping by to comment. Gosling's performance does echo back to Half Nelson. I think the Variety review nails it when it says this movie won't break any records at the box office. Would I pay to see this movie? Probably not. Was it better than most of the Hollywood films I see at press screenings (and never even post about)? Yes.

I too prefer movies that have something fresh to offer, but have come to realize that can't be on demand. In in interim, we have Hollywood.