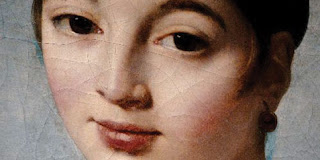 Using my write-up on Olivier Dahan's La Vie En Rose as a segue into commentary on Heddy Honigmann's Forever, I pay another visit to Edith Piaf's grave in Père-Lachaise Cemetery while faint refrains of La Goualante de Pauvre Jean drift off into the overhanging chestnut trees. Why did I cry? Was it because we had lost The Little Sparrow? Or because I recognized even then the weight of carrying on? The responsibility to create as the truest form of homage? As—the word implies—the ability to respond?

In her Filmmaker interview with Scott Macaulay, Marion Cotillard recalled that when the project was first proposed to her, she met Olivier Dahan "at that French café near the Père Lachaise. I live [near] there, and [Piaf's] buried there." Heddy Honigmann might just as well have filmed this connection between Piaf's grave and the early conversations that generated the film La Vie En Rose. That continuity between the dead and living through the medium of artistic expression is unquestionably one of the main themes of Honigmann's tranquil, lovely documentary.

If it is true that the etymological root of religion is the Latin religare—which means "to tie, to fasten, to bind"—then perhaps it is memory itself that binds the living to the dead, accounting for what I've long accepted as the religiosity of memory. Honigmann skillfully captures the nature of that religiosity, its faithfulness, its evocation. Whether through the maintenance of gravesites, offerings of flowers and touchstones, pilgrimages, or one of a million mirrors of memento mori, rituals of memory serve to underscore the import of what has been left behind and how it might inseminate the future. "Death is the mother of all beauty," poet Wallace Stevens once wrote. And Joni Mitchell once sang, "I look at the granite markers / those tributes to finality / to eternity / and I look at myself here / chicken scratching for my immortality." The gravestone is mirror; memory its reflection. What Honigmann suggests is that art is the memory that lasts the longest because it frequently inspires new art and sustained remembrance.

There's much to love in this documentary. Not the least of which is Honigmann's uncanny patience to sit and wait and watch, to let the stories come to her, to gently coax them near like shy deer, like nearly invisible things hungry to be seen. A young Japanese woman at the grave of Chopin reveals that she is in Paris training to be a concert pianist because her dead father loved Chopin. Three blind people allow her to film them "watching" Simone Signoret. A taxi cab driver far from home sings a plaintive ethnic lament. A woman reveals that the love of her life died three months after their marriage from a bee sting. That story touched me because bees—in and of themselves—are symbols of what is to be done with death. Antonio Machado saw it. Bees make sweet honey from old failures. And absence is presiding presence after all.