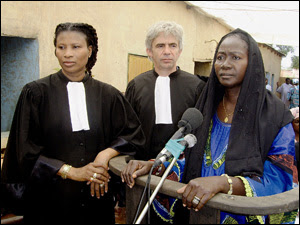 I first saw Abderrahmane Sissako's Bamako at Toronto's Paramount Theater during the 2006 Toronto International Film Festival and was quite impressed. I'm delighted that SFIFF50—in collaboration with the Museum of the African Diaspora and the San Francisco Black Film Festival—have brought Bamako to the Bay Area for a festival run before its official distribution later this year by New Yorker Films. I've reworked my notes from TIFF and amplified them with some of the film's critical wake since then.

Bamako initially reminded me why I chose The Evening Class as the name for this site. I took the title from Ousmane Sembene's assertion that African cinemas are the evening class for adults who approach cinema as a means to focus on the issues of their lives. In the West we are accustomed to such issues being diluted by fictional dramatizations that cater to our short attention spans and whatever appetite for narrative entertainment or visual spectacle is currently in vogue. Bamako will disappoint such expectations and will not likely find favor among most Western audiences who will undoubtedly find its approach didactic and polemical, which is unfortunate, because it is near brilliant, particularly in its indigenous allegiance to now-outmoded styles of oratory that any armchair anthropologist will recognize from various African groups, as well as the Algonquin, the Maya, who encircle an issue with eloquence in hopes of sifting out a solution.

In Bamako the World Bank, the International Monetary Fund, the G8, the World Trade Organization, and other forces of globalization and privatization are put on trial ("really more of an inquiry" Stanley Kauffmann qualifies in The New Republic) in a small courtyard where the rituals of justice co-mingle with the rituals of everyday life. But justice—ever a relative term too frequently mistaken for law enforcement—is not only blind with dispassionate eyes wide open but as hobbled as the metaphorical ram that provides moments of comic relief for being a thinly-veiled critique of the judicial process. I am reminded of the historical accounts of Amerindian oration subverted by the treaty-speak of the invading Europeans, how all that eloquence pleading for fair treatment was reduced to signed treaties that were easily broken, and self-serving laws that ignored existing systems of resolution. What is spoken of in Bamako is readily apparent and that might draw criticism from those wanting to hear something "new." But how can eloquence move on to something "new" when it is still encircling the unresolved issues of the past?

What deserves attention in Bamako is how urgently complaints are voiced, as well as the countenances of those addressing the court or listening nearby. Their faces tell everything. They are powerful and beautiful and diverse. Some complain to the court in anger, others in heated debate, others through silence and a refusal to acknowledge the court's sovereignty; but, the movie's sterling moment is when an elder griot (Zegue Bamba)—who has been refused audience early in the film—can no longer hold the words in his heart, and interrupts the proceedings with a song that doesn't require subtitles or translation to be understood. His is one of the most powerful songs of heart I have ever heard and its plea for compassion silences everyone into rapt attention. My breath caught in my throat. Kauffmann considers this unsubtitled emotional outburst as the seeming demonstration of "the unheard protests of the continent."

Abderrahmane Sissako, who attended the TIFF06 screening, was grateful for Bamako being shown at the festival and hoped audiences would intuit that Africa's lament might all too soon be inherited by the West.

"This Western film caricatures popular attitudes," Kauffmann simplifies. Acquarello isn't content with that simplification at Strictly Film School and expands the image rather than reduces it, noting that the Death in Timbutktu clip "incisively channels the spirit of Nigerian film pioneer, Moustapha Alassane's Le Retour d'un Aventurier, the first native African film ever made that, ironically, depicted all the conventions of a Hollywood Western plot (albeit with African cowboys chasing zebras instead of wild horses). In evoking the specter of Alassane's seminal, but intrinsically derivative film, Sissako traces the inequitable history of western subservience and imitation to the figurative beginning, a sobering imputation that the socio-economic problems of post-colonial Africa are not only the residual legacy of economic imperialism and unfair trade, but also culturally self-inflicted in the naïve imitation of an unattainable western ideal." 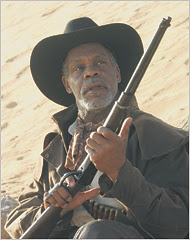 In an interview David Pellecuer conducted with actor Leo Castel for Senses of Cinema, he brought up Castel's participation in genre films, including Italian westerns. Castel commented upon the nature of those "leftist Westerns" and his comment reminded me of Bamako: "[T]he Manichean side of those Westerns, their escapism and identification—this annihilates the reality of class conflict. And at the same time, it's a reflection of this conflict, in the sense that tensions really existed; this may be the reason why the Western genre came into being. Still, the ideas remain hidden. Somebody wrote in Cinéthique that the Western was a 'hypostasis of the class struggle'. Yes, but it's like the Bible: invent a popular language in order to screw the masses even more, meanwhile obscuring the real conflicts of alienated work."

Discussing this with Acquarello at his site, he agreed that the idea of a "flattened" class structure "fit in well with the inclusion of the Western in Bamako, particularly in the context that Danny Glover is also one of the first ones (if not the first one) to fire a shot at the village. It makes it a kind of dysfunctional equality, much like the way Africa's 'equal access' to the global economy is really something that is undercutting its own long term viability and sustainability."

Contrary to my naïve adoption of Sembene's philosophy about adult African moviegoers, Nathan Lee's review for The Village Voice stages his concern of how the film speaks to contemporary Africans. "Ultimately," he writes, "that's beside the point, given that the populace of Mali hardly needs a lecture, no matter how entertaining, on the impact of the IMF on their daily lives. . . . When you factor in the linguistic and literacy challenges that arise when screening films for the general African public, to say nothing of the exhibition infrastructure, the issue of domestic impact grows more complex. And as [Bamako's executive producer Joslyn] Barnes made perfectly clear: The 'average' African doesn't have the luxury of forming an opinion about Bamako for reasons Bamako directly confronts."

In her interview with Danny Glover and Abderrahmane Sissako for The New Statesman, Vanessa Walters underscores this thread and reveals the serious damage done to the African film industry in the 1980s in the wake of the economic ruin that followed IMF policies. "But even while interest in African film is growing in Europe," Walters writes, "the industry at home still struggles. Sadly, although Bamako has got a general release in both France and Britain, it is less likely to be seen in Mali itself, where the number of cinemas has fallen from 40 to three since international financial institutions forced the state to sell cultural assets in the 1990s."

On Saturday, April 28, at 5:30—following an earlier screening of Bamako at the Sundance Kabuki—SFIFF50 will feature "Picturing Development." Executive producer/actor Danny Glover will be joined by activists and academics to discuss the issues raised in Bamako. The panel will discuss the persuasiveness of the film's polemic.
Posted by Michael Guillen at 4/04/2007 07:09:00 PM

Film Forum now has a podcast which includes a Q&A with Danny Glover on Bamamko from Feb. 14th

There's so much going on here than what most people think. After reading many reviews, it seems that the cultural gap between the "West" and "Africa" is too wide to bridge for viewers.
First of all, the elder man called a "griot" is not a "griot" ("jeli" in Bamanakan). The only jeli that appears is the female one in the wedding party, and by praising those around her, she manages to pull money even from the court.
The elder man is, well, an elder. I don't believe he spontaneously breaks into song. It's clear that he is the last to speak. He does so in a manner that is not understood by the "western" world and much of the city. Whipping his fly-whisk (a symbol of elder-hood, wisdom, and the power from both), he succeeds to captivate the audience. Later on, one of the lawyers referred to his "song" as meaning something to the effect of "I planted, I worked, I reaped, I did not eat." I didn't understand his dialect very well, but if this is indeed the case, then Mali is growing rice. In one block of his speech, he refers to "malo," which means both "rice" or "shame" depending on context and such. Somewhere else in the film someone mentions that it is better to be dead . . . which my mind links the pieces together to remember the proverb "Saya ka fisa malo" or "Death is better than shame." Ironically, the film ends in death, after being put through an accusatory investigation, but I don't think many people understand what happened. Let's just say that someone is buying a ticket for two to Dakar, and not just one. But what does this mean for our global crisis which parallels the lives that we see?
The film moves in spheres all related to one another; on the nuclear family level, on the dynamics of a compound, on the economics of a city, and on the ills of global nations and their relations.
I just wish that a quick "primer" could be played before the movie to give foreigners the context that they need; I feel that despite my language skills and personal experiences, I am missing out on many levels of the film.

Thank you very much for your thoughtful comments, Anon. I agree with you 100% that the richness of this film bears not only repeated viewings but continued learning. I appreciate the insights you've offered here.