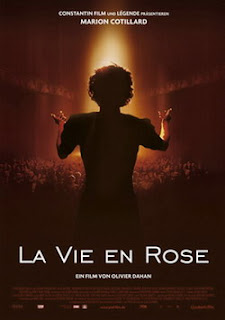 When I was a child of four living with my Grandma Nofre and Grandpa John in Ely, Nevada, I recall a late afternoon when we were gathered in their living room listening to the radio. A song came on that delighted me and I started dancing. I couldn't help myself. Even though it made my grandparents laugh, I had to dance to that song.

Fast forward to 18 and I'm in another living room in Lucky Hollow, Pennsylvania, and my host puts on an album and suddenly there's this song that I remember from my childhood. I have my wits about me to ask him, "Who's singing? What's the name of that song?" He brought me the album cover and allowed me to attach Edith Piaf and "La Goualante de Pauvre Jean (The Poor People of Paris)" to my childhood memory. He then introduced me to the chanteuse tradition of which The Little Sparrow was the irridescent exemplar. 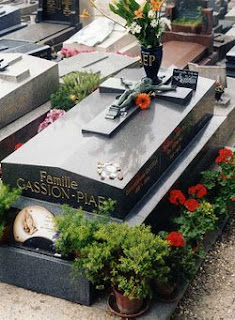 Fast forward to my mid-20s and my first visit to Paris. My traveling companion Lee Jarnagin has taken me to the Père-Lachaise Cemetery. Keen to my intimate eccentricities, he waits patiently while I hum La Goualante de Pauvre Jean to Piaf's grave. I can't adequately explain to him why paying homage to influence brings me to tears. 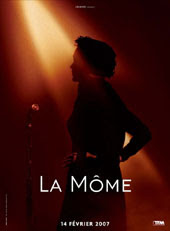 Fast forward to October 2003 where—to celebrate my surviving to 50—I've given myself a month in Paris, fulfilling every romantic innuendo I've harbored for the previous two decades: an apartment in the Left Bank, coffee-stained dog-eared paperbacks, strolls along the Seine accompanied by plaintive accordions, and a heart full of winging sparrows tinged by late afternoon light. And because Mystery is so sweet in her dispensations of grace, it just so happened that on that birthday visit Paris had mounted two celebratory exhibitions: one for Jean Cocteau at the Pompidou and one for La Môme at l'Hôtel de Ville. Since the latter was a free public exhibition and near my apartment, I returned several times to savor the thematic installations, thrilling to the film clips of Piaf's performances, and the photographs that chronicled her passionate, all too brief life. I drank Piaf until I was drunk and must admit I've never suffered a hangover and need only to hear her voice to suddenly be 4 again, then 18, then 22, then 50. Her voice contains the span of a lifetime, her's, my own, perhaps everyone's if they have anything near to a heart that measures the sad inevitable passage of time.

Thus you can imagine how much I have anticipated Olivier Dahan's La Vie En Rose, the closing night entry to SFIFF50. Without question, generous samplings of Piaf's music and Marion Cotillard's passionate performance redeem the film's failings. Cotillard's portrayal of Piaf—as Scott Macaulay describes it for Filmmaker—"blasts through historical detail to get at emotional truths about the life of an artist." Comparable to Forrest Whitaker's performance as Idi Amin in The Last King of Scotland—another flawed vehicle—Cotillard deserves flung roses for elevating the script handed to her and clearly she will be among the hopeful quintet of actresses nominated at the next Oscars. 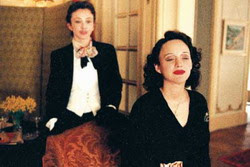 My reservations about the film as a whole, however, have been voiced by several critics following its premiere at the Berlinale earlier this year and then later at the "Rendez-Vous With French Cinema" series at New York's Lincoln Center. David Hudson's dispatch to The Greencine Daily remains the most fair and articulate. Complaining that the film's "sudden leaps are neither clever nor obvious" and way too frequent—interfering with the film's "narrative traction"—Hudson offers compensatorily that through this temporally disjunctive device "we realize [very late in the game] that we've been watching shards shed from the spotty memory of an ailing drug addict, which is supposed to explain why we've been not so much jumping as flailing around the chronology of Piaf's tragically short life."

I love his term "narrative traction" because it aptly describes the momentum that needs to be built up in order to access the emotions that inform the film's events. Sadly, that momentum is repeatedly thwarted so that I was left feeling little about Piaf's impoverished childhood and many of the tragic events of her life and for someone who personifies impassioned emotion, this seemed an oddly misplaced judgment on the part of Olivier Dahan. I hope to understand his intentions more fully when he attends closing night. 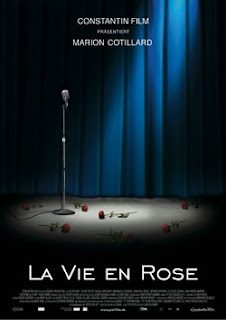 On the other hand, Dahan achieves some brave directorial flourishes that are both bold and evocative. James van Maanen elaborates in his dispatch to The Greencine Daily: "[Dahan] takes some quite interesting risks, as well: silencing the striking Piaf voice during an important concert, thus allowing us to concentrate on Cotillard's visual presentation and the audience response to that performance." That scene remains one of my favorite frissons from the film. The encounter with Marlene Dietrich was likewise exciting though I wish her subsequent friendship with Piaf would have been further explored. And Jean-Pierre Martin's heartthrob portrayal of boxer Marcel Cedan is virile and magnetic.

wow, that film sounds very unique...i can certainly see why you're anticipating it.

RC, thanks for the comment. Just to be clear, however, I've already seen the film but am anticipating hearing how Dahan justifies his creative decisions.

Yours is a handsome site, by the way. I look forward to having the time to explore it more fully.

While I haven't seen 'La vie en rose' yet (it opens in Australia on July 12), I appreciated your comments about Piaf's music. It reminded me of her 'Non, je ne regrette rien' welling up emotions when I heard it in a coffee ad many years ago. I consequently went out and bought a CD.

Based on your's and David Hudson's reviews, I'm interested to see the film when it's released here.

Thanks for stopping by, Paul. I certainly hope you return to share your impressions when you finally have the opportunity to see the film, which--despite my reservations--really warrants being watched.

i saw this at the Berlinale, but i didn't like it enough to be inspired to write a review about it. it's beautifully shot tho, and Cotillard is quite amazing as Piaf (completely transformed), although many of my companions at the opening ceremony thought her performance was a little overwrought.

Well I suspect Piaf herself was a little overwrought. The chanteuse style, like Portuguese fados, are an acquired taste, I think. Lots of people don't like that much drama in their music. They want it cool and neat like Peggy Lee.

My personal history with Piaf is almost identical to yours, Maya. It was uncanny to read, everything from the earliest memories of that voice as a youngster (in Australia, and long before that coffee commercial!) to the séjours à Paris and the graveside devotions at Père-Lachaise. Thank you for your eloquent evocation. I saw La Vie En Rose two nights ago at the San Francisco Internationl Film Festival, and I was enraptured from beginning to end. To have the opportunity to engage in discussion with Olivier Dahan regarding his artistic vision and some of the "controversial" aspects of his direction was, to say the least, most gratifying. I think he and Marion Cotillard have given us a masterpiece of rare brilliance and depth. Vive la môme, toujours avec nous.

Paul, thanks for your lovely comment. I'm glad the film affected you so positively and that you were gratified by talking with Olivier. I wanted to throttle him around the neck and shoulders myself for posing the French artiste suffering from ennui. Heh.

Heya, caught 'La Vie En Rose' at the French Film Festival held over here last week, and I thought it was a great film. Great not in the sense that I finished the film and went 'WHOA, I JUST SAW SOMETHING REALLY AMAZING!', but more like, something I thought was pretty good while watching, then few days later, upon retrospect, realized that it was a pretty damned good film with vivid images and scenes that linger.

Being someone of my, er, generation, obviously, the only impression I have of Edith Piaf is La Vie en Rose, and the fact that she's a mythical figure often referenced in other French films. Reading up on her life two years ago, and then downloading her songs for a listen, I thought of the whole thing as a lesson for myself. Couldn't get into the songs then, was unprepared due to how different they sounded compared to anything else I've listened then.

But after seeing this film... let's just say that I've been constantly looping her album these days.

"[Dahan] takes some quite interesting risks, as well: silencing the striking Piaf voice during an important concert, thus allowing us to concentrate on Cotillard's visual presentation and the audience response to that performance." That scene remains one of my favorite frissons from the film.

I was pretty amazed by that long single take scene where Edith found out about Marcel's tragic fate too. Flashy, yeah, but effective nonetheless for me.