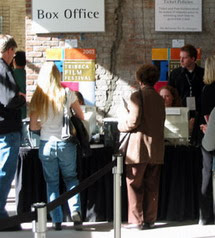 I'm probably about as shocked as anyone else regarding the Tribeca Film Festival's hiking of ticket prices by 50%, now ranging in the $18 per ticket range, and I don't even live in New York. indieWIRE reports on the fracas and quotes our homeboy Graham Leggat:

" 'We're not inventing it from scratch,' explained Graham Leggat, head of the San Franciso International Film Festival and the San Francisco Film Society, when asked about the pricing plans for his festival. Leggat, a former top NYC arts exec who has worked at the Film Society of Lincoln Center, MoMA and GenArt, explained that the cost of tickets to the SF festival is intentionally pegged to the price of attending regular movies in his city and that when he joined the organization he lowered prices. This year, with the SFIFF about to celebrate its 50th anniversary, tickets for most screenings cost $12, with discounts to seniors, students and SF Film Society members (SFFS organizes the annual event).

" 'All along we've been staying slightly ahead of the multiplex or arthouse price for general admission,' Leggat told indieWIRE on Thursday, adding, 'On the other hand, we want to be sure we are giving our members a decent enough premium, if we went much above that, given our size, we'd be cutting our own throat.' "

Thanks for looking out for us, Graham!

Photo courtesy of Eugene Hernandez/indieWIRE. Cross-published on Twitch.
Posted by Michael Guillen at 4/02/2007 08:35:00 AM