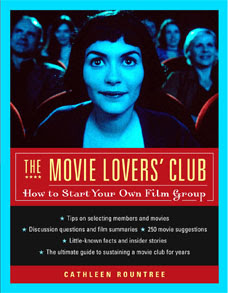 Roughly about a year ago I met Cathleen Rountree at the press conference for SFIFF49 where she approached me to enquire after my digital recorder. As a seasoned interviewer, Cathleen's cassette recorder was just about to give up the ghost and she was exploring options. I smiled about this when I spotted her across the room at this year's press conference.

Exploring options is a good way to describe Cathleen. It doesn't take long in her presence to recognize her independent, entrepreneurial spirit, her deep-seated interest in other people, and her enthusiastic curiosity in new ways of appreciating cinema. We had several interests in common, not the least being our passion for cinema coming out of Mexico, Central America and South America, which Cathleen frequently capsulizes for SFIFF's program catalogs (this year she whets appetites for Verónica Chen's Agua and Ricardo Elias' The 12 Labors). Further, we had both studied Jungian psychology, recognizing filmmakers as the new mythmakers if not the contemporary inflection of ancient shamans. As I was recovering from a series of hospitalizations and maneuvering the war zone of disability insurance carriers, Cathleen was kind in sympathizing with my approach towards movies as a means to mend and heal.

After one of last year's SFIFF press screenings we shared lunch in Japantown and Cathleen enthusiastically profiled her upcoming book—The Movie Lovers' Club: How To Start Your Own Film Group (2006, Inner Ocean Publishing)—and her negotiations with a web designer to build the book's companion site. I'm happy to report the book has done well, garnering praise far and wide; but, it's Hannah Eaves' write-up for Greencine that provides the best glimpse into the book's structure and objectives. Last year especially, with the San Francisco Film Society's promoted collaboration with Ironweed Films, models were being presented on new ways to share movies with others, in the face of dying movie theaters and declining box office. A night was selected for people all over the Bay Area to watch the same film at organized house parties.

Cathleen had already begun exploring such options in the late '90s and her book is no less prescient than its publication last Summer. Whether through "small house parties-cum-private screenings" via Ironweed or Film Movement, or whatever's risen to the top of your rental queues on Greencine or Netflix, whether you've raked it in at Virgin at one of their frequent $10 sales, or whether you're taking advantage of the new "screen scene" streaming video-on-demand fare from Greencine, Jaman, Firecracker, and countless others springing up seemingly every day, the bottom line remains that the essence of this so-called "social cinema" is its sociality and cinema's communal texture. Cathleen's ready for you, welcoming you at the front landing, offering food that will complement screenings, suggesting strategies on how to choose films, calendar films, let alone how to select members for ongoing or nascent groups so that discussion will illuminate and enrichen films, and inviting you back for the next grouping. Or as Cathleen quotes Pauline Kael: "Being able to talk about movies with someone—to share the giddy high excitement you feel—is enough for a friendship."

Granted, film buffs in a regional hub like San Francisco might not feel any need to be advised on what to see nor where since we live in a virtual cornucopia of cinematic wealth with delicious eateries at every corner and a film festival at every weekend; but, even for us seasoned snobs, the book remains a perfect guide with its year-long suggestion of titles, its thematic groupings, and its intimate allegiance to the warp and woof of the seasons. I keep it by my bedside to dip in and out of as the whim fits. Sometimes I like to read the quotes. Sometimes I peruse trivia. Often the questions she poses for group discussion offer new perspectives and fresh insights even at a solitary reading.

But don't take my word for it. Negotiations with Cathleen's web designer produced a handsome and informative companion site for the volume that outlines the book's (and the site's) philosophy, an intimate bio of Cathleen, raves on the book, links to her reviews and published pieces in the Santa Cruz Sentinel, SF360, Release Print, and Jung Journal (previously The San Francisco Jung Institute Library Journal). She's building a respectable list of reviews and (my favorite!) previews and reports from various film festivals. Clearly Cathleen is a dedicated festival junkee, just like me. Don't miss her great interview with Eddie Muller from the recent Noir City.

Just to make it even easier for you, here are some of Cathleen's pieces for the Santa Cruz Sentinel. First her experience of last year's Sundance Film Festival; her Oscar prelude gleaned from her experience at this year's Palm Springs Film Festival; an entry celebrating Valentines shenanigans; and (as of this week) a piece on how movies are reviving the Atomic Age uneasiness about a bleak future.