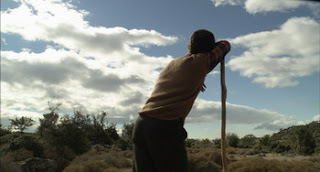 Encouraged to catch Reha Erdem's Beş Vakit / Times and Winds at the 2006 Toronto International Film Festival, the film ended up being one of my favorites and I have no doubt it will retain that status even within SFIFF50's diverse line-up, where it celebrates its West Coast premiere. It certainly warrants a second appreciation. Erdem is expected to attend.

Times and Winds is illuminated with moments of colloquial radiance. Beautiful, poignant, tender, these moments are visually framed by mutable weather sweeping across wide landscapes (stunningly photographed by Florent Herry). By film's end, I was weeping, face in my hands, grief stricken for all the vulnerable children in the world harshly disciplined by stern fathers and the serrated edge of life's fugacity. Unexpectedly overcome—and, admittedly, a bit embarrassed at my inability to stop crying—I noticed a fellow a few seats away from me who kept staring at me with a bemused grin, as if I were an entertaining fool. I felt my privacy violated. Who the hell was he to mock my grief? Of course, he was no one other than director Reha Erdem, who obviously got his jollies off watching me become devastated by the film's sumptuous photography and aching themes of childhood lost. If he hadn't created such a beautiful film, I might have punched him in the nose. Instead, I emerged from the theater and scribbled down this response:

You children, who sleep blanketed in warm straw
Or inbetween hummocks of sunlit grass
In the dappled shade of summer pine needles
Or dreaming on sunsoaked stone
Taking refuge in the narcolepsy of innocence

You children, who work hard, learn hard,
While moons scudded with clouds stare with watchful eyes,
While constellations cycle and clouds somersault
While the sea swallows whole the endless self-limitations of shorelines and men
You children, slumber through the last days of your innocence
And dream of killing your fathers.

Beware the murders you wish for.
Beware the folly that will break your heart. 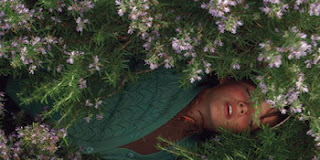 As Dimitri Eipides synopsizes for the TIFF capsule: "Times and Winds is a finely etched portrait of remote village life in Turkey composed of small, meticulously observed moments of great beauty, melancholy and lyricism. …Erdem has a profound and innately poetic sense of the rhythmic passing of time, with each day in the village divided into five by the calls to prayer. … Despite the arduous living conditions and the domestic indignities that the young ones endure, Times and Winds is not a depressing film, for within each heartbreak lies the potential for self-discovery and redemption."

Variety's Derek Elley insinuates that any plot synopsis will sound like "a recipe for boredom" but assures that "Erdem's calculated juggling of small events creates an atmosphere of much more going on than is actually shown on screen."

J. Robert Parks observes at Framing Device: "The movie opens with a night shot of the village lights, but it's framed in such a way that it focuses on the dark water and sky behind it. In fact, the numerous landscape shots frequently combine land, sea, and sky in ways I haven't seen before, and the way the light is captured at all times of day is breathtaking. The pans across the hills become luminous meditations that provoke awe and wonder. The long shots of the minaret set against the sky and water are simply spectacular."

Set in the Turkish village of Kozlu with its cobbled uneven streets and embroidered pillowcases, Times and Winds celebrates the poet's task of "shepherding the winds" and reminds me yet again why I favor foreign films that allow audiences glimpses into pastoral villages and lifestyles well on the decline. Such films may end up being the final record left of a particular texture of rural upbringing. 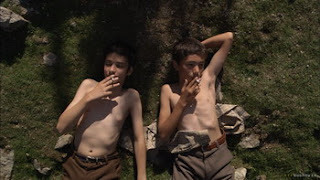 Twitch teammate Opus, though less enthusiastic than I, states his objections but concludes: "[A]s a pure mood piece laced through with introspective thoughts concerning the roles of fathers, and the terrible consequences when they abuse their authority, Times and Winds can be quite powerful and haunting."
Posted by Michael Guillen at 4/05/2007 12:05:00 AM