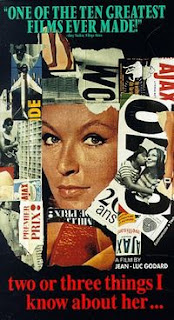 There was a time—not that long ago—when I would go to the movies and watch images projected large on the silver screen and return home to craft a written response, preferably a mythopoeic one. I'm not quite sure where the process inverted but these days I tend to read about movies at home and then go out looking for the film that matches the description(s). It's not always a perfect fit—aligning images to words and vice versa—often it's not even a comfortable one, as Godard professes in Two Or Three Things I Know About Her.

As I am fond of saying these days, paraphrasing Alice, the more movies I see, the behinder I get. The oeuvre of masters like Godard are daunting to a novice, and it's often just catch as catch can. But after being assigned by my SF360 editor Susie Gerhard to locate online resources for a piece that ran earlier this week on Two Or Three Things I Know About Her playing at the Castro Theatre, I decided to actually go see the film this afternoon. Imagine!

I found the film's maverick sensibility quaint, if that's a word that can be used with regard to Godard's iconoclastic adventures. Quaint and oddly nostalgic; dated enough to make it palatable but not so much so that I lost complete interest. All these concerns about subjectivity and objectivity, silence and words (and whispered narration somewhere inbetween), the social construction of spaces called cities, and the truth-defying limitations of language: all themes I anguished over and worked out through Lawrence Durrell's Alexandria Quartet. Having them be summoned once more and inflected in cinema recalled me to the frustrations and irritations of my 20s. Though they are no less valid or challenging as concerns, Godard's usage of them for this film—perceived as rebellious and daring at the time—now seemed familiar and well-worn, like a favorite baggy sweater scented with chainsmoke and caffeine, the two driving daimons of this film, which is to say the two most evident bad habits. 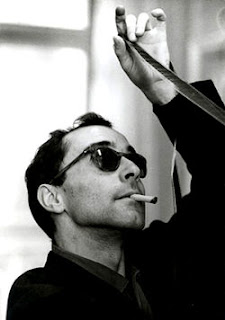 In a classic case of life imitating art, I knew within the first 15 minutes that I was going to doze off unless I ran to the concession stand for a cup of hot black coffee ("reverie and sleepiness are frequent bedfellows in the movie theater and never more so than here", Max Goldberg cautioned in his SF Bay Guardian piece on the film). Clinging to my mantra that "soporific is terrific", I returned to my seat in time to experience my favorite scene in the film: what I call the coffee cosmology scene. Carly Simon, considering the vanities of others and pondering the clouds in her coffee, might have done better to reach further than her grasp as Godard did here. As frothy bubbles coalesce, the swirling dark matter of a cup of coffee organizes and launches thought into both cellular and galactic space. At Strictly Film School Acquarello explores this abstracted image as Godard's attempt to express "the syntactical difference between an object's meaning and its significance. It is the filmmaker's personal quest to find the unifying root of this implicit duality that is captured in the recurring image of the attenuating vortex of a cup of black coffee—an allusion to organic genesis in its coincidental resemblance to spiral galactical formation and nuclear mitosis—a desire to return to the origin of the fracture: to reconcile one's abstract, intellectual knowledge with real, tangible, true human understanding." Or, as Max Goldberg entitled it: "Two or Three Things Godard Saw In His Coffee." Later, an intense close-up of the glowing tip of a cigarette likewise borders on the cosmological.

Goldberg defines Two or Three Things I Know About Her as "the eye of the storm of Godard's '60s, that crucial moment between impact and explosion." Susie Gerhard deftly synopsizes Craig Keller's 2003 Senses of Cinema profile on Godard, culling out Keller's keen observation: "In discussing the cinema of Jean-Luc Godard, one inevitably arrives at the question of where exactly to mark this artist's own 'leaps forward' on the timeline of a long and prolific career; and in addressing that question, one first must decide how to make the distinction between 'before' and 'after,' and then how many times to make the distinction." Keller's A to Z intensive, Gerhard continues, locates Two or Three Things I Know About Her as one of the announcers of "the shift in Godard's methodology to a fundamentally Marxist social critique." My favorite Marxist reference was about how American shoes step on the toes of the Vietnamese, and the South Americans. That was back in the '60s. We're stepping on different toes now.

The Guardian's Peter Bradshaw coins the description that Two or Three Things I Know About Her is a "cinema of ideas"—as one intertitle frequently asserts—and Bradshaw alludes to my other favorite scene in the film—when Juliette (Marina Vlady) prostitutes herself by walking around naked in a hotel room with an airlines travel bag over her head. Michael Hawley—ever quick on the draw—claims this as his next Halloween costume.

04/05/07 UPDATE: Via Dave Hudson at The Greencine Daily, Runa Islam recounts this treasure (among several) in a guest column at frieze.com: "During the filming of 2 ou 3 choses que je sais d'elle (Two or Three Things I Know about Her, 1967) Jean-Luc Godard fed his actors questions and lines through a concealed ear-piece and recorded their improvised responses. Their distracted and often contradictory replies and their casual address to camera are among the several approaches to filmmaking that Godard employed, along with disruptive sounds that fragmented the narrative in unprecedented ways."

Also via Dave, Kathy Fennessy reports to SIFFBlog that Two or Three Things I Know about Her made her feel "hectored" and "marks the point at which the rot starts to set in."
Posted by Michael Guillen at 3/31/2007 09:11:00 PM

Thanks for linking to my Godard review at Siffblog. Unfortunately, the old link became corrupted after our webmaster moved the content to a new server. Here's a better link: http://www.siffblog.com/reviews/dead_objects_live_on_004574.html