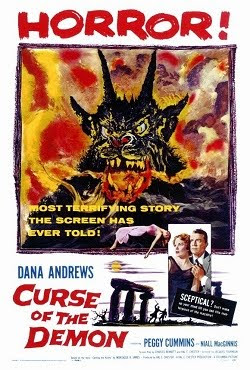 Continuing their tribute to Peggy Cummins, Noir City screened Jacques Tourneur's Curse of the Demon (aka Night of the Demon, 1957). Alan K. Rode, author of Charles McGraw: Biography of a Film Noir Tough Guy and the soon-to-be-published Michael Curtiz: A Man For All Movies (University Press of Kentucky), as well as the producer of the Arthur Lyons Film Noir Festival in Palm Springs—returned to the Castro stage to provide introduction.

Rode detailed that there were two versions of the Tourneur film, Curse of the Demon and the one unspooling at Noir City, Night of the Demon. The film was shot in England in 1956 and released in the U.S. in 1958 as Curse of the Demon, with 12 minutes cut out of it. "But the version you're going to see tonight, courtesy of our good friends Grover Crisp and Sony/Columbia is going to be the 96-minute version." 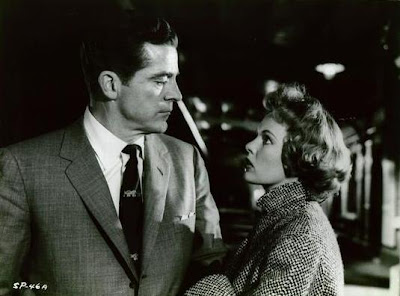 Co-starring with Peggy Cummins in Curse of the Demon is Dana Andrews, who Rode opined, "Always established this implacable believability in every role that he undertook. This picture is no exception. He plays an expert in paranormal psychology who comes to England to look into the supernatural and he is convinced that it's all a bunch of baloney. Peggy is there as kind of the spine to the movie to convince him that maybe this isn't just all charlatans and fakery." Curse of the Demon had a wonderful supporting cast led by Niall McGinnis, who plays one of the all-time great heavies. 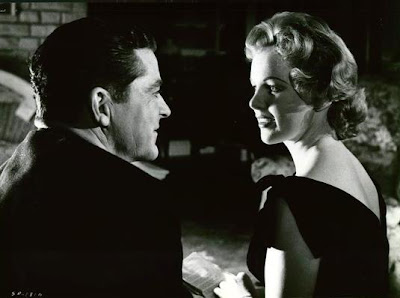 The redoubtable Jacques Tourneur (Out of the Past, Nightfall) cut his teeth working in Val Lewton's unit making such films as Cat People and I Walked With A Zombie. Much of that suggestive cinema of dread and terror elicited from in-camera effects can be traced throughout Curse of the Demon. Therein lies some back story between Tourneur and the film's producer Hal E. Chester, who was a child actor featured in some of the East Side Kid films, and who later produced some of the Joe Palooka series at Monogram. Chester ended up in England and wanted Curse of the Demon to be a monster horror film. After Tourneur had directed it, Chester added scenes of the demon, which was a big sticking point for Tourneur who didn't want the film to be so explicit. Chester was always on the set, rewriting Charles Bennett's script. Bennett had scripted such pre-WWII Hitchcock movies as 39 Steps and Foreign Correspondent. As Dana Andrews described Chester, "He was a real little schmuck."

Be that as it may, as John Ford once said, "Most of the good things in movies happen by accident." Out of the alchemy of Curse of the Demon's great cast, director and script (including Cy Endfield's uncredited participation) came a movie that was a classic of its type. When Rode first saw the film on his parents' Philco, he rushed upstairs and got his mother's bread knife to keep beside him for protection "from the demons that were out there." To this day it holds up remarkably well. A terrific film, immensely suspenseful, well-crafted and a fitting continuance of Noir City's ongoing tribute to Peggy Cummins.
Posted by Michael Guillen at 2/01/2013 10:56:00 AM