SILENT WINTER 2013: THE THIEF OF BAGDAD (1924)—Introduction by Jeffrey Vance 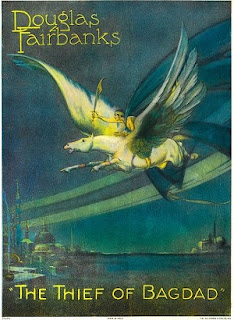 As Thomas Gladysz has written for the San Francisco Silent Film Festival: "The Thief of Bagdad shows Douglas Fairbanks at the top of his form. Directed by Raoul Walsh and adapted from One Thousand and One Nights, the story revolves around a thief (Fairbanks) who falls in love with the daughter (Julanne Johnston) of the Caliph of Bagdad. To win her hand, the thief must bring back the world's rarest treasures. This rousing fantasy is replete with flying carpets, winged horses, and underwater sea monsters. Exquisite camerawork and lavish sets support the film's special effects, all of which make The Thief of Bagdad a wildly entertaining spectacle. Also in the cast are Snitz Edwards, Sôjin [Kamiyama], and the lovely Anna May Wong. Inducted into the National Film Registry in 1996 and voted one of AFI's top 10 classics in 2008, The Thief of Bagdad has recently received a crisp new restoration. That restoration will be shown at the Winter event."

Co-presented by Fandor, and introduced by film historian Jeffrey Vance with live musical accompaniment by the Mont Alto Motion Picture Orchestra, The Thief of Bagdad was hands-down my favorite selection from this year's Silent Winter program; an uplifting and spirited fantasy-adventure. 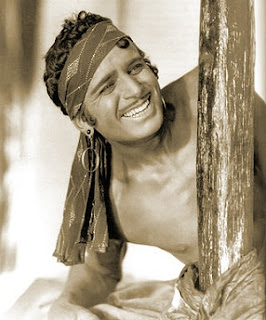 Douglas Fairbanks—along with Mary Pickford and Charlie Chaplin—was one of the first Hollywood superstars. He was also one of the best creative producers in American film and one of Hollywood's great leaders. Fairbanks came to films as a Broadway star, transitioned into films first as a screen satirist, then as the great screen swashbuckler. Beyond that, he was a civic leader, an independent producer, the first president of the Academy of Motion Picture Arts and Sciences and the developer of America's first film school, now called the USC School of Cinematic Arts. Fairbanks' film collection was one of the most important and earliest deposits of the fledgling Museum of Modern Art film library. So Fairbanks was at the forefront of many important things; a great leader; a great artist.

The Thief of Bagdad is generally considered to be Douglas Fairbanks's greatest film. It was also his personal favorite of all his own films. The film's superb visual design, spectacle, visual effects and Fairbanks's performance all contribute to making this his masterpiece. It took 65 weeks to make and the sets covered 6½ acres at the Pickford-Fairbanks studio lot in West Hollywood. It was also one of the largest and most expensive films made up until that time. The negative cost for The Thief of Bagdad was a little over 1.1 million dollars; an enormous sum for an American film at that time.

Raoul Walsh was chosen by Fairbanks as the film's director. Although it was the type of fantasy film that Fairbanks wanted to make, it was not exactly Walsh's cup of tea. Nevertheless, Fairbanks was confident of Walsh's capabilities to coordinate the unusually large production and he enjoyed Walsh's sense of humor and practical jokes. Yet Raoul Walsh was hardly mentioned in the reviews for The Thief of Bagdad and that was because it was understood at the time that Fairbanks was the dominant creative force. "I bet it's a hard thing for film critics and people who write about film to understand," Vance commented, "but the past is a foreign country and they did things differently there." Fairbanks was the show. He was the person who put this film together and it disturbed Vance when his friends at the Cohen Film Collection called it Raoul Walsh's Thief of Bagdad, "when it wasn't, it isn't, it's Douglas Fairbanks's Thief of Bagdad." 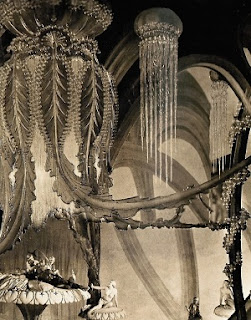 Fairbanks—not Raoul Walsh—hired William Cameron Menzies, a former commercial artist, as the film's art director. Fairbanks wanted the design of the film to first and foremost suggest the extravagance and imagination that was wonderful in the Arabian Nights tales. Fairbanks was also inspired by the German spectacles he had seen, as well as Diaghilev's ballets, particularly Scheherazade: Diaghilev's great success danced by Nijinsky. Fairbanks had definite ideas for the design of the film. Fantasy pictures up until that point had been self-consciously theatrical. Fairbanks, Walsh, and Menzies worked together to create a new world for The Thief of Bagdad and they developed a design on which the whole production pivots. Applied to the Art Noveau décor, Menzies's pen-and-ink effects—which registered like a drawing on the screen—were revolutionary. Prior to The Thief of Bagdad, set designs and décor in major films had been at best and in most cases a jumble. Menzies's sets for The Thief of Bagdad created a world where the cast and the setting melded in rhythm and motion. Fairbanks's role of Ahmed in The Thief of Bagdad was different from the roles audiences had come to expect of him. He was less the All-American "Doug" Fairbanks than a ballet dancer in the style of Nijinsky. Indeed, Fairbanks doesn't act the part as much as he dances it. The Thief of Bagdad is a spectacle, a larger-than-life film that demands the big screen, live music and an enthusiastic audience, by which the outsized performances take on a proper proportion. The Fairbanks swashbucklers were like ballet and were also an authentic projection of part of Fairbanks's personality and his instinctive flair for beauty, both in art direction and in movement.

Radiating such a larger-than-life persona, Vance has often been asked, "How tall is Douglas Fairbanks?" As actual fact, he stood 5'8" tall at the time of Thief of Bagdad and was already 40 years old and weighed 150 pounds, which—according to Raoul Walsh—was 150 pounds of muscle, not an ounce of fat. One character in the film with a bit more than an ounce of fat on him is the corpulent Persian prince. The role, however, was played by actress Mathilde Comont in an uncredited performance. Outfitted with a small moustache by the make-up department, this helped Comont create her gendered illusion. The ladies in the film of note who actually play ladies are Julanne Johnston as the Princess and the one and only Anna May Wong as the Mongol slave girl.

Probably the only thing larger-than-life than Fairbanks were the sets he surrounded himself with. These spectacular, background sets were enormous and were upward and outward expansions of his Robin Hood (1922) sets; the same foundations but with different facings put on them that ingeniously transferred Nottingham Castle into the Palace of Bagdad.

As for the visual effects, Vance quoted Charlie Chaplin and said that once a person knows how something is done, the magic is gone. He offered to answer any questions in private so as not to spoil the effect for others. The only thing he offered was that the hardest effect to achieve was that of the flying carpet, which required a 90-foot tall crane with platforms for the camera operators. Margarita Landazuri provides the working details in her essay "The Magic of the Magic Carpet" included in the festival's nifty souvenir program.

The reviews for the film were astounding and included responses from Pulitzer-prize winners like Robert Sherwood and Carl Sandburg who said this was the greatest thing ever put forward on film. The critics were ecstatic but audiences preferred Fairbanks in simpler material with less fantasy so Fairbanks never made anything as ambitious again.

The new 2K digital restoration completed by the Cohen Film Collection in 2012 insures that this great masterwork of world cinema will continue to be enjoyed well into the 21st century. Scheduled to be released on DVD and Blu-Ray the following week, Vance enthused that the Silent Winter audience was truly fortunate to have the Mont Alto Orchestra perform this superb presentation. He concluded by saying, "The Thief of Bagdad is a great work of art; but, it's also a lot of fun. If you find yourself laughing at Fairbanks, you're not clued in on the joke. You should be laughing with him. His spirit is here today, I don't doubt. His family's here. He wouldn't have wanted to miss an audience of 1400 people. He liked applause and encouragement, especially from the young and the young-at-heart, so don't hold back."
Posted by Michael Guillen at 2/23/2013 11:42:00 AM