As Thomas Gladysz has written for the San Francisco Silent Film Festival: "Think slow, act fast" is a quote attributed to Buster Keaton. Even if apocryphal, it suggests the studied approach behind his many popular films. Keaton, whose consistently deadpan expression earned him the nickname "The Great Stone Face," was best known for his trademark physical comedy. At times, it was impossible to take your eyes off him. This program features three early Keaton shorts, each made shortly after Keaton left Fatty Arbuckle to work on his own. On the bill are One Week (1920), The Scarecrow (1920), and The Playhouse (1921), introduced by the legendary television writer and director Frank Buxton and accompanied on the grand piano by Donald Sosin. It's worth mentioning that long before he was involved with TV shows like The Odd Couple and Happy Days, Buxton worked with Keaton in Summer stock.

Frank Buxton arrived on the Castro stage wearing a baseball cap that read "Keaton's All-Stars 1926 Championship Season" and explained that Keaton was a great baseball fan (detailed in an essay by Rob Edelman). Whenever production on a film would halt due to, let's say, a camera breakdown, Keaton would play baseball. He even organized a team in Hollywood, which—as Buxton's cap memorialized—won the 1926 championship among the various motion picture industry teams. Buxton mentioned this because he had come across a Facebook page and companion website opposing plans to bulldoze Keaton's baseball field in Bluffton, Michigan for real estate development. When he was in vaudeville, Keaton and his family would spend their summers in Muskegon, Michigan where they had an actors colony. Joe Roberts—seen in all three Keaton shorts—also lived in that colony, and he and Keaton frequently played baseball.

In 1949, when Buxton was an aspiring 19-year-old theater actor, he had the marvelous opportunity to work with Keaton in a summer stock production. Their friendship began then and lasted until Keaton's death. When Keaton was 21, he quit vaudeville and entered films with Roscoe "Fatty" Arbuckle. Keaton considered Arbuckle his mentor and never called him Fatty, always Roscoe. Keaton frequently said that everything he knew about motion pictures he learned from Arbuckle; but, Buxton was quick to point out, this wasn't necessarily true. Once Keaton got the chance to make his own silent films, he invented and re-invented all kinds of ways to make his films better, funnier, and more interesting. 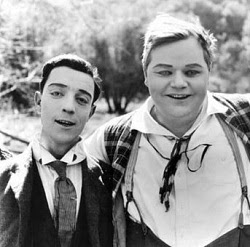 When Keaton first worked with Arbuckle, he asked if he could take the camera home where he took it apart and put it back together again. He wanted to see how it worked. He then wanted to understand how to process film in a laboratory and how to edit film. He wanted to understand set construction and everything that went into making a motion picture. Rather than being content to simply stand in front of the camera, Keaton learned to use the camera and applied film technique to make his films that much better. But rather than go into Keaton's background, Buxton referred to Richard Hildreth's essay in the festival's souvenir program (which also features an excerpt from Malcolm H. Oettinger's 1923 article for Picture-Play magazine). 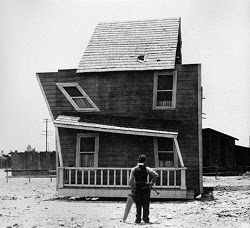 As for the shorts themselves, Buxton noted they were being shown in chronological order. One Week was actually Keaton's second film. Keaton didn't much care for his first film; but, One Week revealed his particular genius, even though Keaton always said that no one could be a genius in a flat hat and slap shoes. "Wrong!" Buxton asserted. The genesis of every single film Keaton made can be seen in One Week. He made more than 45 two-reelers. Each reel of 35mm film ran about 10 minutes and so a two-reeler was, naturally, 20 minutes in length. Within that framework, Keaton had to develop a beginning that would grab the viewer—a wonderful gag in the case of One Week—develop the plot and the gags all throughout and then finally lead to a climax that would leave the viewer laughing. 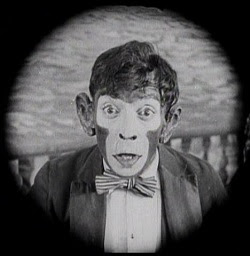 There's an evident growth from One Week through The Scarecrow to The Playhouse in what Keaton was able to do in the camera. Keaton didn't have green screen and CGI and he didn't have stunt men. He never used stunt men because he always said, "Stunt men aren't funny. They don't fall down funny; they fall down painful." But his growth as a filmmaker is evident leading up to The Playhouse, which Buxton characterized as an amazing technological feat as well as a great and funny comedy. Parenthetically—though there is a politically incorrect minstrel scene in The Playhouse where Keaton dons blackface—Buxton asked his audience to consider that minstrel shows were quite common in the 1920s, to go ahead and be sensitive to the representation, but to not blame Keaton.

To wrap up, Buxton quoted from the Damfinos' online biography of Keaton: "Keaton did more than slapstick. He had a wry wit, a deft touch for satire, breathtaking acrobatic ability and an innate and delicate touch with both black comedy and fantasy. Where his contemporaries pointed the camera at funny people doing funny things, Keaton made the camera his partner and developed a new comic vocabulary with it."
Posted by Michael Guillen at 2/22/2013 07:29:00 PM