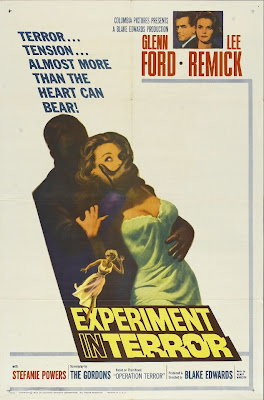 To introduce the world premiere of the brand-new 4K digital restoration of Experiment in Terror (1962), Eddie Muller expressed his gratitude to Sony Pictures. "You've heard my rap all along about the studios that take care of their films and the studios that don't. Sony Pictures is the absolute great. They own the Columbia library. This is a studio in Hollywood where probably in 10 years you'll be able to have a choice when you ask for a film like Experiment in Terror. They will say, 'The film or in digital?' Yeah! That's a nice option to have."

Muller staged a competition between the studios regarding their digital restorations. He said he was going to call Grover Crisp at Sony and tell him that Paramount has just done an awesome digital restoration of Sunset Blvd. and that his Noir City audience was going to compare it to Sony's restoration of Experiment in Terror. The studios like this, Muller explained, because this is actually how the future is going to work. He has to be able to hold the studios' feet to the fire and say, "This is now the bar. This is what the public expects." I clearly took this staged rivalry too literally, however, when later in the mezzanine I cornered Muller and placed my vote. I wasn't much impressed with the digital restoration of Sunset Blvd.—the contast seemed off to me and the blacks never seemed more than a dark grey—but, Experiment in Terror was thrillingly lustrous, especially in its darkest scenes. In my opinion, Sony had set the bar. Hearing this, Muller tossed me a disgruntled look and emphasized that—as far as he was concerned—both of them had done a great job. Whoops! Whether or not we were supposed to actually choose, my vote remains with Sony. 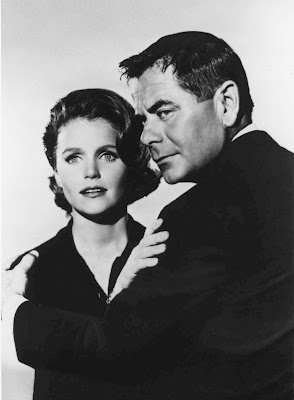 Having just shown The Sniper—which took a good look at a serial killer in 1952 San Francisco—Noir City now offered San Francisco in 1962 as seen in Experiment in Terror with its beserk, psychotic criminal mastermind. "There's a very significant difference between the two," Muller asserted. "This guy [in Experiment in Terror] does not just pick women off the rooftops, this guy tortures them psychologically first. And we're very lucky that the woman he's torturing is Lee Remick."

Director Blake Edwards loved San Francisco so much that he filmed two movies here back to back—Days of Wine and Roses (1962) and then Experiment in Terror—and really gave Alfred Hitchcock a run for his money with Experiment. Though everyone thought of him as a comedian, Edwards proved he could pull a Hitchcock and ratchet up the suspense, plus he worked with his long-time collaborator Henry Mancini on an absolutely fantastic score; one of the best ever, really.

Because Experiment in Terror includes fantastic location shooting in San Francisco, as a special treat to his San Francisco Noir audience Muller offered a clip reel concocted by Brian Hollins—administrator of ReelSF.com—which shows all the San Francisco locations used in Experiment in Terror, first as they originally appear in the film, followed by video of how they appear today.
Posted by Michael Guillen at 2/07/2013 06:14:00 PM