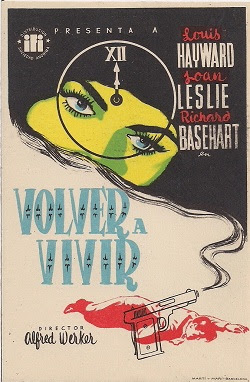 In his introduction to a double bill of "showbiz noir", Alan K. Rode stated that those in the audience who were habituers of Noir City would recall that Repeat Performance (1947) screened at the festival in 2008. Joan Leslie was the featured guest that year and was given an on-stage tribute, despite the unfortunate fact that a 16mm print was the best that was available to screen at that time. So when Todd Weiner and company at the UCLA Television and Film Archive asked the Film Noir Foundation (FNF) to partner in a 35mm restoration, FNF immediately said yes.

Repeat Performance is historically important for a number of reasons. Although Eddie Muller's notes in the souvenir program guide describe the film as a backstage melodrama crossed with The Twilight Zone, Rode described Repeat Performance as the film noir version of It's A Wonderful Life. "Who else," he posed, "gets the chance to relive the past year after they've killed their husband on New Year's Eve?" 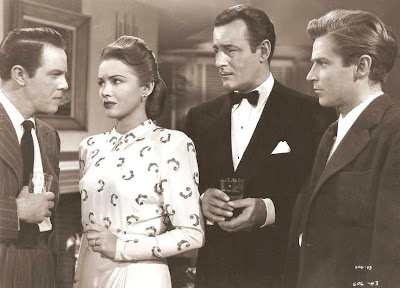 The film was made in 1947 and directed by Alfred Werker, better-known for He Walked By Night made the following year. Originally, Jules Dassin had been hired to direct the film with Franchot Tone in the lead role but in Hollywood—then as now—all that changed and Werker stepped in to direct and Louis Hayward was cast as the male lead instead. Hayward was a major star married to Ida Lupino who went off to war in the Pacific, saw quite a lot of combat action, and—as with many people involved in the war—came back a changed man, divorced Lupino, and ended up increasingly in B pictures; though in 1947 he was still a major star.

Interestingly enough, the Assistant Director on Repeat Performance was Robert Stillman (who produced Try and Get Me!). Stillman went on to become Stanley Kramer's partner on a number of productions into the 1950s. Repeat Performance also featured Virginia Field, Tom Conway (who took a break from playing The Falcon at RKO to play a role that his brother George Sanders might have been better suited for), and Natalie Schafer (better known for playing the wife of Thurston Howell III on Gilligan's Island). 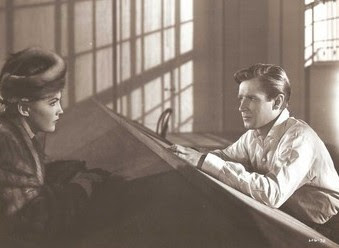 But most notably, Repeat Performance was the feature debut of a quite young and beautiful Richard Basehart. Basehart had received the New York Drama Critics Award for his performance in the Broadway production of The Hasty Heart and was brought to Hollywood amidst great fanfare. He didn't end up at MGM, or Warner's, or 20th Century Fox but at Eagle-Lion, a studio that was trying to build itself up as a solid competitor, with Repeat Performance being one of their key projects in their effort to produce A films. The problem lay in the fact that the major studios at that time also controlled the theaters. Eagle-Lion became involved in the infamous lawsuit that resulted in the studios having to divest themselves of their theaters, thereby breaking that monopoly and ushering in the collapse of the studio system. Repeat Performance premiered in Richard Basehart's home town Blainville, Ohio. Basehart, of course, went on to star in many other films and television projects, including the memorable narrative voiceover for the 1984 Olympics. 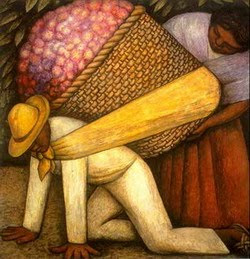 Watching this gorgeous restoration print of Repeat Performance reminded me that it was one of the first films to focus my attention on the use of Diego Rivera's Cargador de Flores as set decoration—not only here but again in such noir favorites as Walk A Crooked Mile (1948) and The Prowler (1951)—which I wrote up for The Evening Class for Noir City 6.
Posted by Michael Guillen at 2/02/2013 08:16:00 PM