The San Francisco Silent Film Festival's (SFSFF) one-day winter program has become a welcome tradition, helping silent film fanatics endure the long months between the organization's main festival held each July. While last year's winter event took the form of a triumphant mounting of Abel Gance's Napoleon at Oakland's Paramount Theatre, this year it's back to the Castro Theatre for a single 13-hour marathon of silent era classics. Transpiring on Saturday, February 16, Silent Winter 2013's five programs—a silent Snow White, a trio of Keaton shorts, a Douglas Fairbanks blockbuster, Mary Pickford's last silent and F.W. Murnau's Faust—are all SFSFF premieres and I can't imagine missing out on any of them. Here's a closer look at what's in store. 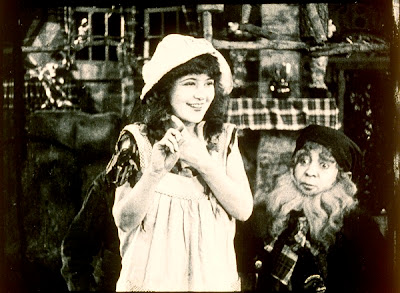 10:00 A.M. Snow White (1916, USA, dir. Searle J. Dawley)—Legend has it that a 16-year-old newsboy named Walter Elias Disney attended a free screening of this movie at the Kansas City Convention Center in 1917, and it became the prime inspiration for his 1937 feature debut, Snow White and the Seven Dwarfs. Director Dawley already had film versions of Hansel and Gretel (1909), Frankenstein (1910) and A Christmas Carol (1910) under his belt when he adapted Winthrop Ames' popular 1912 Broadway stage play. Actress Marguerite Clark, who starred in the original stage version, returned to portray Snow White at the age of 33. Standing 4' 10" tall, the diminutive Clark was Hollywood's second biggest movie star in the years immediately following WWI (Mary Pickford being first), and of the 40 movies she made only three exist today. Snow White was also considered lost until materials discovered in a Dutch film archive led to a new restoration by the George Eastman House. This screening will be introduced by J.B. Kaufman, author of Snow White and the Seven Dwarfs: The Creation of a Classic, which was released in conjunction with the Walt Disney Family Museum's ongoing exhibition of the same name. While the film is considered static and stagey even by 1916 standards, it is appreciated today for its imaginative art direction and Clark's spritely performance. Incidentally, the dwarfs in this early version of Snow White are named Blick, Flick, Glick, Snick, Plick, Whick and Quee. Accompaniment will be provided by Donald Sosin on grand piano. 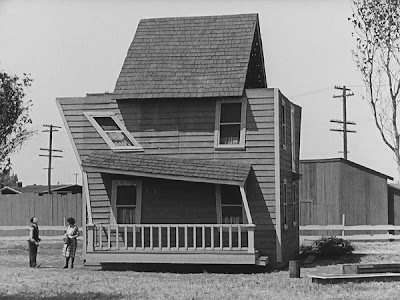 12:00 Noon Think Show, Act Fast: Buster Keaton Shorts: One Week (1920), The Scarecrow (1920), The Playhouse (1921) (USA, dir. Edward F. Cline, Buster Keaton)—Almost every SFSFF event includes a movie spotlighting the comic genius of Buster Keaton, and rightly so. This program gathers three shorts made immediately after The Great Stone Face outgrew the aegis of Fatty Arbuckle and began directing his own films. One Week is the hysterical tale of newlyweds attempting to build a house from a do-it-yourself kit and is the only one of the day's films I've seen previously. (I first encountered One Week at a 2003 screening in Paris that was introduced by Japanese director Hideo Nakata (The Ring, Dark Water) and saw it more recently at 2012's SF International Film Festival, with rock band tUnE-yArDs providing musical accompaniment.) The Scarecrow is best known for the Rube Goldberg-ian space and labor-saving devices that share a cramped house with Keaton and actor Big Joe Roberts, as well as some spectacular chase sequences. The Playhouse's claim to fame is a variety show in which Keaton, through some extremely innovative camera trickery, plays all the performers and audience members. This program will be introduced by SFSFF board member and Keaton acquaintance Frank Buxton. Donald Sosin again accompanies on grand piano. 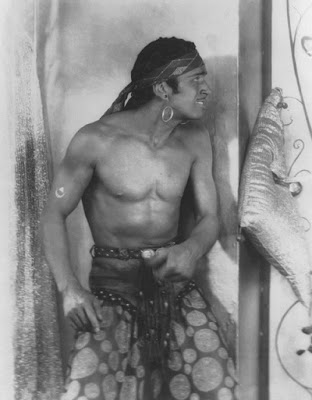 2:30 P.M. The Thief of Bagdad (1924, USA, dir. Raoul Walsh)—After being thrilled by the daring-do of Douglas Fairbanks' The Mark of Zorro at last summer's festival, I'm psyched that SFSFF has programmed another of his famous vehicles this soon. Thief was Hollywood's first million dollar production and was supposedly Fairbanks' favorite amongst all his movies (he was 40 at the time of filming). Apart from seeing Fairbanks himself, I can't wait to spend two hours and 40 minutes savoring William Cameron Menzies opulent set design, numerous special effects which include flying carpets, winged horses and sea monsters, and last but not least, Anna Mae Wong as the princess' Mongol slave. I've heard some grousing about the film's digital projection, albeit in a new 2K restoration, but the opportunity to see this on the big Castro Theatre screen, at least for me, trumps any quibbles I might have over format (everything else at the SFSFF Winter Event will be in 35mm). Introducing the film will be Jeffrey Vance, author of the definitive 2008 biography, Douglas Fairbanks, and Fairbanks "aficionado extraordinaire" Tracey Goessel. Accompaniment will be by the incomparable Mont Alto Motion Picture Orchestra. 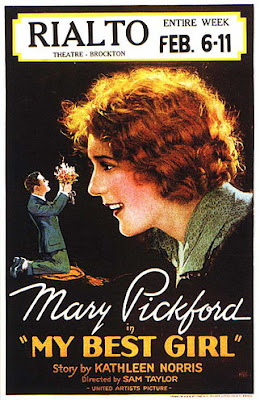 7:00 P.M. My Best Girl (1927, USA, dir. Sam Taylor)—Following a short dinner break, the evening's program begins with Mary Pickford's farewell to silent cinema. Released just three weeks after The Jazz Singer, this romantic comedy is considered by film scholars to be one of her best. (Pickford would win a Best Actress Oscar® for her first talkie, Coquette, but it was considered more of a testament to her power in Hollywood than a vote for the performance itself.) My Best Girl finds "America's Sweetheart" playing a Five and Dime stock clerk forced to train a handsome new employee (Charles "Buddy" Rogers), who in short order is revealed to be the boss' son in disguise. Pickford claimed to have prepared for the role by working as a salesclerk disguised with horn-rimmed glasses, until customers started getting wise. Rogers, fresh from his triumph in the previous year's Oscar®-winning Wings, would marry Pickford in 1936 following her divorce from Douglas Fairbanks, a marriage that lasted until Pickford's death in 1979. Be on the lookout for an uncredited appearance by Carole Lombard as a "Flirty Salesgirl." Once again, Donald Sosin accompanies on grand piano. 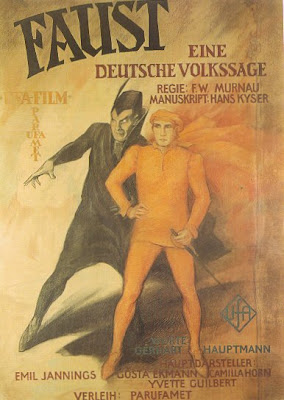 9:00 P.M. Faust (1926, Germany, dir. F.W. Murnau)—As it so often does with the SFSFF, a long day at the Castro Theatre fittingly ends with something dark and creepy. This time it's Murnau's acclaimed adaptation of the Faust legend, in which a learned man sells his soul to the devil. Coming just four years after his equally eerie Nosferatu, this masterpiece of German Expressionism would turn out to be Murnau's last European film. Indeed, when Faust premiered in Berlin, Murnau was already in Hollywood shooting his immortal Sunrise. Due to its elaborate production design and numerous special effects, Faust took six months to shoot and was German studio UFA's most expensive film to date, at least until the following year when they took on Fritz Lang's Metropolis. Actor Emil Jannings, who worked with Murnau previously on The Last Laugh (1924) and Tartuffe (1925), is said to give a "brilliantly nuanced, subtly comic performance" as the devil Mephisto. Accompaniment on the Castro's Mighty Wurlitzer will be provided, not by Dennis James, but by Christian Elliott, who is to the best of my knowledge making his SFSFF debut.