The San Francisco Independent Film Festival, a.k.a. SF Indiefest, celebrates its 15th birthday this year and has appropriately dubbed the occasion, ¡Fiesta Quinceañera! Running from February 7 to 21 and mostly headquartered at the Roxie Theater, 2013's festival boasts 34 features and 43 shorts from 17 countries. I've attended practically every Indiefest to date and declare that in terms of highly anticipated, edgy big buzz films, this line-up promises to top them all. Luckily, I've been able to preview much of it via DVD screeners and on-line streaming. 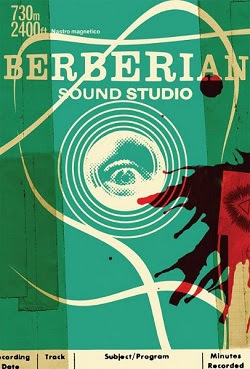 Topping the list is Peter Strickland's Berberian Sound Studio—arguably the most critically acclaimed UK film of 2012—in which Toby Jones gets perfectly cast as a British sound editor hired to work on a gruesome Italian giallo flick. This milquetoast-y momma's boy, more accustomed to working on nature documentaries, is forced to create sound effects for a movie about tortured witches in a girls' equestrian academy, all while being simultaneously coddled and tormented by his Italian co-workers. It's a classic fish out of water scenario that ultimately jumps down a Mulholland Drive-like rabbit hole. The resultant ending doesn't easily satisfy, but Berberian Sound Studio is much less about plot than it is about atmosphere, mood and tongue-in-cheek humor. I can't wait to experience it again, but with an audience on a big screen. 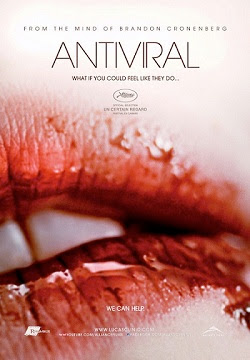 While we never actually see the gross stuff of Berberian's movie-in-a-movie, there's gore galore in Brandon Cronenberg's Antiviral. The apple hasn't fallen far from the tree in this auspicious feature debut from David's son, which contains more "body horror" than any Cronenberg Sr. film since 1999's eXistenZ. In a future dystopia where butchers sell "meat" grown from the cells of celebrities, and where people pay to acquire the diseases of the rich and famous, Antiviral's protagonist smuggles celebrity maladies from a high-security clinic by injecting them into his own body. What could possibly go wrong? Up until a convoluted final act, young Cronenberg's direction is extremely assured. He's helped by an inspired production design and creepy lead performance from pasty-skinned redhead Caleb Landry Jones (Breaking Bad, Friday Night Lights). The film competed in Cannes' Un Certain Regard sidebar last year and was written by the director following a nasty case of flu. 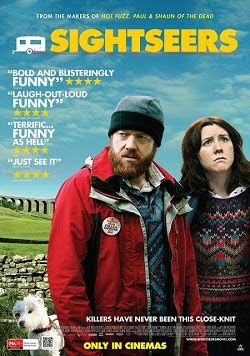 Also having competed at Cannes, but in the Director's Fortnight sidebar, is Ben Wheatley's morbidly hilarious third feature, Sightseers. Like his first two films Down Terrace and Kill List (the latter screening at Indiefest14), grisly criminal behavior is discomfortably raked with savage humor, although this outing finds Wheatley capably directing material written by others. Tina, a sheltered young woman with a spiteful mum, takes off with new boyfriend Chris on an "erotic odyssey"—actually a road trip via mobile home visiting banal Yorkshire tourist spots. After a confrontation with a litterbug unmasks Chris as a volatile psychopath, Tina discovers her own inner assassin and the pair fuck and feud their way across the British countryside. Combining elements of The Honeymoon Killers and Serial Mom, Sightseers is more of an outright comedy than Down Terrace or Kill List, albeit one with plenty to offend genteel sensibilities. 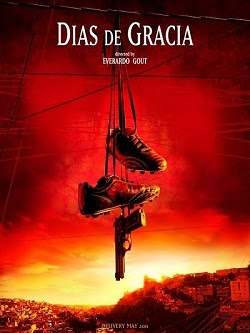 SF Indiefest's 2013 Centerpiece Film is Everardo Valerio Gout's debut feature Days of Grace, a slick thriller that world premiered as a special Cannes midnight screening in 2011. The movie earned 15 Ariel Award nominations (Mexico's Oscar®), won eight of them and can only vaguely be considered "indie." Highly stylized, intricately constructed and steeped in violence and corruption, Days of Grace cross-cuts between three kidnappings which occur during three different World Cups. I found it difficult keeping track of the three threads, (even though different composers, including Nick Cave, are employed for each section), but I'm not always the brightest bulb in the marquee when it comes to navigating complex plotlines. The showy soundtrack utilizes three interpretations of "Summertime"—by Janis Joplin, Nina Simone and Scarlett Johansson—to nice effect. 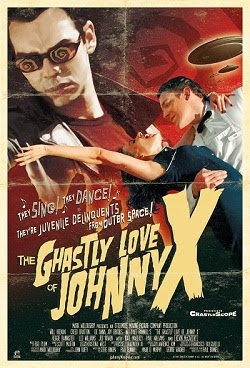 Paul Bunnell's Greaser sci-fi musical, The Ghastly Love of Johnny X, returns to the Bay Area nearly a year after its 2012 world premiere at San Jose's Cinequest. Despite shortcomings, it's easy to enjoy this ambitious labor of love for the cheesy special effects, clever musical numbers and eye-grabbing B&W cinematography (shot with the very last of Kodak's B&W Plus-X film stock.) And then there's Kevin McCarthy's final screen appearance as the Grand Inquisitor who banishes Johnny X to planet Earth. TGLOJX has the distinction of being the lowest grossing film of 2012, earning the pauperly sum of $117.00 during its U.S. theatrical run. The final narrative feature I previewed was Wrong, Quentin Dupieux's much anticipated follow-up to 2010's "killer tire" spoof, Rubber. As with any gag-filled, absurdist comedy, one's mileage will vary greatly. It was the hangdog charm of actor Jack Plotnick's shell shocked ex-travel agent pursuing his kidnapped pooch that stuck with me at the end. 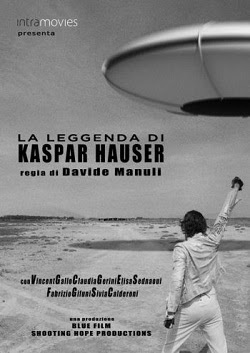 Amongst the narrative features I did not get to preview, I'm most anxious to catch Davide Manuli's The Legend of Kaspar Hauser. Vincent Gallo plays two roles in this surreal, B&W Italian "techno-western" which reimagines the classic 19th century foundling story. The festival kicks off with Michel Gondry's latest, The We and the I, which also opened Cannes' Director's Fortnight sidebar last year to mixed reviews. The film follows a group of Brooklyn teenagers (all played by non-pros) as they ride the bus home on the last day of school. The trailer resembles many insufferable weekday afternoons I've spent riding MUNI. Closing Indiefest 2013 will be a new work from prolific Mumblecore pioneer Joe Swanberg (LOL, Hannah Takes the Stairs). All the Light in the Sky stars Jane Adams (Happiness, Hung) and both she and Swanberg are expected to be in attendance. (The film reappears at the Roxie as part of a three-day, 12-film Joe Swanberg retrospective from February 22 to 24.) Other narrative features perhaps worth considering include Ghosts with Shit Jobs (a dystopian faux-doc in which six Caucasian slum dwellers find themselves subservient to the Asian new world order), The Last Elvis (about a delusional Argentine Presley impersonator from director Armando Bo, who co-wrote the script for Alejandro González Iñárritu's Biutiful), and Simon Killer, a controversial new film from the gang that produced Martha Marcy May Marlene. 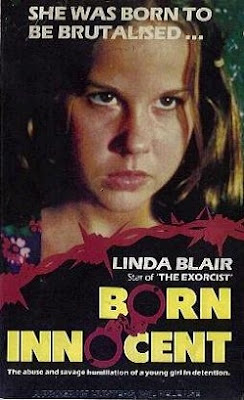 As always, Indiefest digs up a few fabulous repertory titles, which are presented this year in a sidebar titled, House of Psychotic Women. That's also the title of a new book by Kier-la Janisse, described as an "autobiographical exploration of female neurosis in horror and exploitation films." Ms. Janisse will be on hand to introduce screenings of Born Innocent, the legendary 1974 made-for-TV women's prison movie starring Linda Blair (in a rare 16mm print) and an even rarer 35mm print of "unnerving, squirm-inducing" 1972 teen prostitute pic, Toys Are Not For Children.

There aren't many documentaries at Indiefest because the organization presents its own non-fiction showcase, SF DocFest, each autumn. I count five in this line-up, two of which I missed at last month's Palm Springs International Film Festival and was relieved to find here. Leslie Zemeckis' Bound by Flesh tells the astounding tale of conjoined twins Daisy and Violet Hilton, who were among vaudeville's highest paid performers during their between-world-wars heyday. From their 1908 birth to a Brighton barmaid to their 1969 death from Hong Kong flu in a South Carolina trailer park, this sympathetic portrait surveys two truly inseparable lives that survived exploitative guardians, detention at Angel Island, carnival sideshows, appearances in Tod Browning's Freaks and (very) loose biopic Chained For Life (available on available on YouTube), publicity stunt marriages to gay men, hard-drinking Burlesque years, grinding drive-in movie circuit tours and finally, "legit" work as supermarket produce clerks. Actresses Nancy Allen and Lea Thompson narrate as the Hilton Sisters, while various authorities and distant relatives provide the talking heads. My only complaint is the film's overuse of certain archival materials. 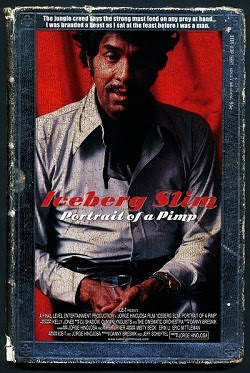 The fest's other highly recommended bio-doc is Jorge Hinojosa's utterly fascinating and insightful Iceberg Slim: Portrait of a Pimp. Executive-produced by rapper Ice-T, it tells the story of Robert Beck, an emotionally wounded university drop-out who at age 50 transformed a lifetime of criminality into a wildly successful writing career under the pen name Iceberg Slim (selling over six million books prior to his death in 1992.) Hinojosa and editor Danny Bresnik engagingly assemble extensive archival materials, poignant animation sequences, pulp fiction artwork and interviews with admirers like Henry Rollins, Leon Kennedy, Snoop Dogg and Quincy Jones. Most importantly, we hear plenty of firsthand testimony from Beck's first wife Betty, the Caucasian speed-typist who encouraged her then roach exterminator husband to dictate his wild tales in their South Central L.A. kitchen.

As I've only touched upon half the feature films which make up SF Indiefest 2013, be sure and check out the rest of the line-up. There are also seven programs of shorts to sample. And don't forget, Indiefest is one Bay Area festival that's known for its parties as well as its film programs, which include a 10th Annual Big Lebowski Party (with mini-bowling, White Russians and 35mm midnight screening), an 80's Power Ballad Sing-a-long Party and a Roller Disco Party.