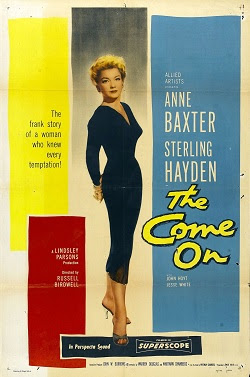 Eddie Muller expressed a couple of caveats regarding the rare screening of Russell Birdwell's The Come On (1956), the second entry in Noir City's annual "Bad Girls Night". He warned that the film was so rare in fact that the print we were about to see suffered for quality, being—as far as he knew—the only 35mm print left in existence. Muller was sure that Castro Theatre projectionist Jeff Root was going to have to work very hard and "ride focus" on this film. "It doesn't really bother me to show one film in this series that is not in really good condition," Muller said, "because it does point out how significantly films can deteriorate and how important it is to do the work to preserve them."

The dilemma, Muller explained, is that some films suffer from what is called "vinegar syndrome", which is a communicable disease that films can share amongst themselves. The film actually begins to warp and deteriorate and archivists will always tell you—if you open up a film can "and it smells like a salad in there"—that's a very bad thing. "This film is starting to seem edible at this point," Muller admitted. 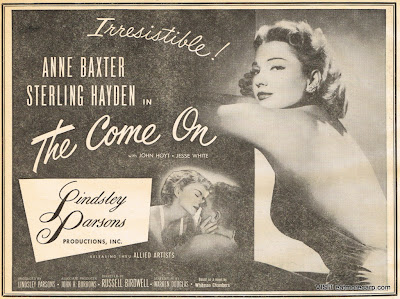 The Come On was an independently-produced movie made in 1956 that did not have the backing of a big studio; it's an Allied Artists picture. It was produced and directed by Russell Birdwell, who was primarily a Hollywood publicist—and though Muller claimed that The Come On was the only movie Birdwell ever directed—IMDb lists a few other projects (namely, The Girl in the Kremlin, 1957). "He is a man who is completely devoid of style," Muller confessed, then qualified, "Well, I don't know if he's a man devoid of style; he's a filmmaker devoid of style." Notwithstanding, Muller deemed the script terrific and a chance to see Sterling Hayden, Anne Baxter and John Hoyt. 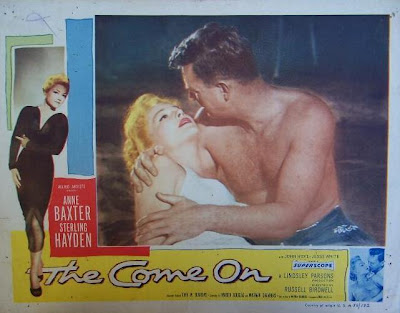 As Muller synopsizes in Noir City's snazzy souvenir program: "Sexy married cougar Anne Baxter catches the eye of sunbaked seafarer Sterling Hayden and—wouldn't you know it!—before their swimming suits are dry, they're plotting the murder of her husband (über-creepy John Hoyt). Alas, all is not as it seems in Whitman Chambers' snaky scenario, a '50s version of Body Heat in which one character won't stay dead and the sleazy private eye is America's favorite washing machine repairman (Jesse White). Sun and sand replace the asphalt, but there is more than enough lying and larceny to go around in one of the most scarcely seen titles in the noir canon." 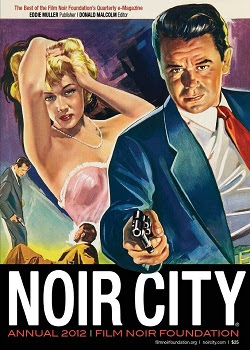 The Come On is one ripe piece of fruit, with Anne Baxter chewing up the palm trees and crossing her eyes when feeling emotionally overcome. Sterling Hayden leans against said palm trees at a nearly inhuman angle, which nonetheless gets him the girl. But perhaps my favorite scene is when Baxter gets Hayden all hot and bothered and then feigns exhaustion, needing to be sent home in a cab. Hayden saunters off but Baxter has the cab pull over to the curb once he's gone around the corner out of sight. As she tosses money at the cabbie to pay her fare, you hear him quip, "I thought he was kind of cute!" Best throwaway gay line ever. Speaking of which, here's a shout-out to the fifth and latest edition of the Noir City Annual, wherein Eddie Muller kicks in a wickedly wry tenspot of Film Noir's gayest couples. A must-read.
Posted by Michael Guillen at 2/07/2013 08:13:00 PM