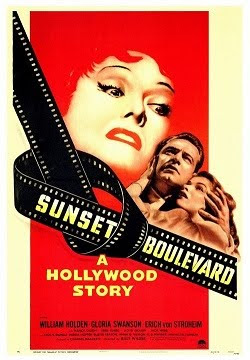 "The theme of today's screenings is 'showbiz noir'," announced Bill Arney, the Voice of Noir City. "And as someone with their own television show Cheese Theatre every Saturday night at 10:00pm on Comcast's Channel 26 Marin, I know a thing or two about the darkness and despair at the core of so-called 'entertainment'. But today is a happy day because we are about to present the American premiere of the digital restoration of one of the greatest films of all time, noir or otherwise: Sunset Blvd."

Eddie Muller then took to the Castro Theatre stage to introduce the film. "I am very excited about today's program for a number of reasons, but number one it's because—not only were we able to create a double-bill of show business noir; Broadway and New York in Repeat Performance and good ol' Hollywood and California in Sunset Blvd.—but we also get to finally show one of our brand-new 35mm restorations (Repeat Performance) side by side with a fully digital restoration of a classic film. As you know, this has been a major issue not just here at Noir City but all over the world as digital becomes the standard for film preservation. Those of you who have been here regularly know that I'm a hardliner—our catchphrase for this year is 'keeping it reel'—but I'm also not a fool. I know that I could spend the rest of my life fighting the future; but, I will—as much as I possibly can—hold the responsible people's feet to the fire and demand that what's actually put out there for public consumption is absolutely and positively as good as it can possibly be. So, in that vein, I am absolutely thrilled that Paramount Pictures has chosen Noir City and the Castro Theatre to premiere its digital restoration of probably its greatest film. So this is quite an honor and you, this audience right here, is in for a treat because you are the first people in America to see this."

Hoping that some people in the audience were seeing Sunset Blvd. for the very first time, Muller mentioned as "a cute little aside" that Bill Arney, the "Voice of Noir" up in the projection booth, met his future bride at a Noir City festival many years ago and Laurel, his wife, has been bugging Muller ever since to show her favorite film Sunset Blvd. at Noir City. "Well, Laurel," Muller shouted out, "I am showing Sunset Blvd. on your birthday!" and then quipped to Arney, "Bill, if you don't get lucky tonight…." 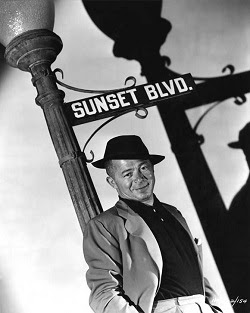 Muller admitted there was little he could say about one of the greatest films ever made, other than that Billy Wilder totally deserves all the credit. It was a film shot almost entirely in secret. Wilder and Charles Brackett wrote the script for the film in fits and starts and actually went into production without a finished script. The story behind the casting of Gloria Swanson is now legendary. Many actresses were approached in Hollywood for what was considered a kiss of death role and much praise must go to Swanson—who had been a huge silent film star—for embracing this and creating one of film's truly legendary characters: Norma Desmond.

William Holden's performance is likewise splendid and it must be remembered that—at the time the film was made—Holden was not a huge star. His rising star had actually dimmed and a lot of people thought that his appearing next to this "tarantula" on screen was not the wisest choice; but, he gave an amazing performance that revitalized his career. 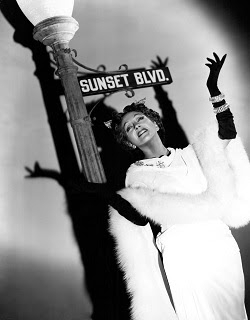 The one little tidbit that Muller wanted to share about Sunset Blvd. was that—when David Lynch was filming Eraserhead, which took him years to get done—he worked with a lot of different crews, and before he would start filming each time he would sit everybody down and show them Sunset Blvd. and said, "This is the feel I want for my movie." Who would have thought there would have been a connection between Sunset Blvd. and Eraserhead?

Finally, Muller gave a big shoutout to Andrea Kalas of Paramount Pictures for making this restoration happen and for allowing Noir City to host the American premiere.

Of related interest: Brian Darr's write-up on Sunset Blvd. for Hell on Frisco Bay, wherein he notes: "Today's Sunset Blvd. screenings are the first time in eleven years that Noir City is trumpeting the world premiere of a restoration not presented from a newly-struck 35mm print but a newly-created DCP drive. Sunset Blvd. is one of four such digital presentations at the festival, also to include Experiment in Terror on Wednesday and the pair of 3-D films on Friday. For some this may feel like the beginning of the end of an era for a festival that has almost never utilized digital projection for anything other than its pre-feature montages, and a betrayal of this year's terrific poster image and slogan 'keeping it reel'."
Posted by Michael Guillen at 2/03/2013 04:06:00 PM