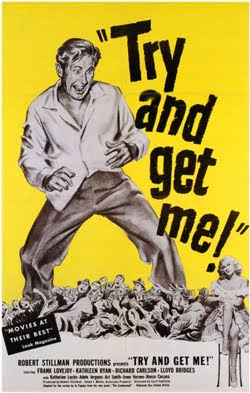 Eddie Muller introduced Try and Get Me! (aka The Sound of Fury, 1951) as an extraordinary production based on a true story with a local angle, namely an infamous incident that took place in 1934 in San Jose, California—the kidnapping and murder of Brooke Hart and the highly-publicized public lynching of his murderers—that serves as the basis for this film, which first inspired Fritz Lang's Fury (1936) and later Joe Pagano's novel The Condemned, written in the late 1940s.

Try and Get Me! was the first film of fledgling producer Robert Stillman who bought the rights to Pagano's novel and hired him to draft the screenplay. In addition to being a continuation of honoring Noir City's guest Peggy Cummins—by way of Curse of the Demon (1957) and Hell Drivers (1957) shown at the festival earlier in the afternoon—Try and Get Me! joined those two films as a subtle tribute to Cy Endfield, who was the uncredited writer for Curse of the Demon, the writer and director of Hell Drivers, and the director and final uncredited screenwriter for Try and Get Me! 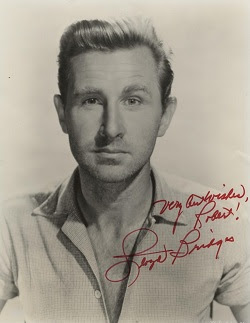 Describing Noir City's opening night feature Gun Crazy (1950) as "catching lightning in a bottle", Muller commented that the same could be said of Try and Get Me! After Frank Lovejoy and Lloyd Bridges give, perhaps, their best performances in a motion picture, there is also an underappreciated yet fascinating supporting role by Katherine Locke. The ever fabulous Adele Jergens is likewise in the cast and, of course, Richard Carlson—ever easy on the eyes—plays the ambitious news reporter too quick to break a story, inciting unbridled public fury.

Like so many of the films that Noir City seeks to find and preserve, Try and Get Me! was released at the height of the Hollywood witch hunt era. Cy Endfield was one of the men blacklisted during that period and Try and Get Me! became the last film he would make in the United States. Just like Jules Dassin, he left the country, went to England where—because of his name Cyril Endfield—he was presumed by later generations to be an Englishman. He went on to do a lot of work with Stanley Baker, made the great historical epic Zulu (1964) with Michael Caine, and so everyone thought he was British, though in fact he was Cy Endfield from New York.

Obviously, Endfield, and Robert Stillman and Joe Pagano felt they had created something incredibly special with this movie. It was released in December of 1950 under the title The Sound of Fury. Because of the witch hunt climate of the time, the film was considered somehow "dirty", was almost immediately withdrawn from circulation and retitled Come and Get Me!, except in two cities where it continued to play as The Sound of Fury: San Francisco and Los Angeles. 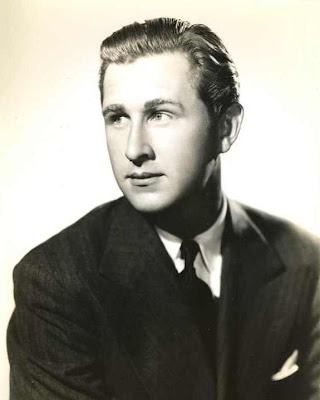 Muller admitted that Come and Get Me! is a film he has wanted to restore since the beginning of the Film Noir Foundation (FNF) and, thus, he was especially delighted to have finally achieved this through the auspices of FNF and the UCLA Television and Film Archive, let alone to be presenting the world premiere of the film's 35mm restoration at Noir City. It was "a torturous road" and Muller felt compelled to thank Paramount who—they found out—did own the picture and allowed the restoration to happen. He also shouted out to the For the Love Of Film (Noir) Film Preservation Blogathon hosted by Marilyn Ferdinand (Ferdy on Films) and Farran Smith Nehme (Self-Styled Siren). "They created an international blogathon to raise money to help us restore this film. It was an absolute grass-roots [effort] that I cherish. Film writers all over the world for one week wrote about film noir with links to provide money to the Film Noir Foundation."

Muller asserted that, by film's end, he was confident the audience would consider Try and Get Me! "one of the most emotionally devastating film noirs you will have ever seen" and quickly joked, "and you know I never oversell."

There's no doubt in my mind that watching the restored print with the beamingly proud Marilyn Ferdinand at my side proved to be one of those outstanding cinephilic moments one can only be proud to experience. Earlier in the day, I had taken Marilyn to lunch at Mission Chinese, introduced her to filmbud Brian Darr, walked her through Clarion Alley, and—as synchronicities go—was surprised to find her sitting next to my saved seat while I was off schmoozing with the crowd. Some friendships are just meant to happen. I walked her "home" afterwards.

As for the film itself, it's an uneven piece, though I was especially taken by the inversive twist of Lloyd Bridges' performance as Jerry Slocum—the film's homme fatale—who seduces gullible Howard Tyler (Frank Lovejoy) with his flashy clothes, fast talk, vain preening, and sleek physique. As Alan Rode later quipped, "I'll never look at Seahunt in the same way again." The mob sequences seemed to me to be appropriated footage from some other less sinister event, with folks in the crowd obviously having a good time rather than being enraged, though the actual prison assault—as Raymond Borde and Etienne Chaumeton wrote in their 1955 survey A Panorama of American Film Noir 1941-1953—"remains one of the most brutal sequences in postwar American cinema." This sequence is raised to a frenzied pitch by the previously cool-as-a-cucumber Bridges transforming into a wild animal rattling his cage, anticipating his public lynching by a vengeful mob, and shouting out the film's title in defiant rage.

Of related interest: At Ferdy on Films, Marilyn Ferdinand provides a thorough plot synopsis and adds: "Endfield was radicalized by the Depression of the 1930s, an era that produced Fury (1936), Fritz Lang’s version of this true story that accorded more with the zeitgeist of its time. Try and Get Me! appeared just as audiences and critics alike were turning against dissent and discord to achieve the artificial peace of the 1950s. Endfield’s nihilistic vision of group think and the court of public opinion was not destined to find favor in its own time."
Posted by Michael Guillen at 2/02/2013 10:24:00 AM