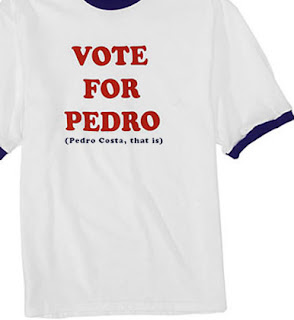 Following up on his earlier review of Ossos, and anticipating Still Lives: The Films of Pedro Costa—a traveling retrospective organized by Lisbon's Ricardo Matos Cabo and launched at Toronto's Cinematheque Ontario—Girish Shambu compiled an incredibly resourceful "one-stop" entry on the critical response to Costa's ouevre to date. The retrospective—meant to be "both primer and corrective, introduction and redress" (James Quandt, Artforum)—has since traveled on to the Vancouver International Film Center, Manhattan's Anthology Film Archives, the REDCAT in Los Angeles, the Harvard Film Archive, the Cleveland Museum of Art, Chicago's Gene Siskel Film Center, Seattle's Northwest Film Forum, Rochester's George Eastman House, the Wexner Center for the Arts in Columbus, Ohio, and will finally arrive tomorrow evening at Berkeley, California's Pacific Film Archive for a run from March 1 through April 12, 2008, beginning with Costa's "magisterial" Colossal Youth (Doug Cummings, Film Journey). As Pedro Costa will be in residency for the bulk of this retrospective, I consider this one of the main cinematic events of the season and follow Girish's lead with a "next stop" aggregate of criticism written to prepare Bay Area cineastes for the Costa retrospective at Pacific Film Archive. Unquestionably, as they say, mileage varies.

Film-specific reviews have been more plentiful. Along with the clutch of Acquarello write-ups for Strictly Film School previously noted by Girish, Acquarello likewise reviewed Colossal Youth. Though nominated for the Golden Palm at the 2006 Cannes Film Festival, the film's critical response at that festival was near to hostile, as profiled by Dave Hudson at The Greencine Daily. Perhaps there's something to be said for seeing a film in proper context, which this retrospective admittedly redresses? Colossal Youth, along with the other films in the series, certainly seems to be picking up adherents as they travel across the U.S. Appreciative—if not wholly favorable—reviews have come in from (as noted) Acquarello, Scott Foundas, Neil Young, Kevin B. Lee, and Fernando Croce to name a few. With the films shown as a whole, and with Costa present to provide keys to doors previously perceived as shut, I'm hoping the series will advance my own understanding and appreciation.

03/05/08 UPDATE: Critical response to the PFA Costa retrospective has been swift and articulate, beginning with Rob Davis at Errata who has probably made Darren Hughes cry by observing five camera pans in Colossal Youth. "These pans are multiplying like loaves and fishes," Rob writes. How could he and Darren not have noticed them before? "I'm not sure if it's the film's somnolence, its rapturous compositions, its multiple axes—time, space, character, repetition, historical context, rhythm of cuts, near-narrative, fiction/non-fiction divide, trilogy completion, any one of which could be overlooked momentarily as the mind pursues a thread, limited by that old rule-of-psycho-thumb about the human brain's ability to keep only 5 or 6 items aloft simultaneously—but, whatever the reason, Colossal Youth, like most great films, releases its mysteries slowly even though it hides them in plain sight."

Meanwhile at The House Next Door, Ryland Walker Knight has relieved me of reportage duties by writing up evenings one and two at Still Lives.

Just today The San Francisco Bay Guardian scored a coup, inviting Mark Peranson to tease out even further insights from his already considerable knowledge of and familiarity with Costa's work. J. Hoberman's description of Costa as a "Straubian neorealist," is misleading, Peranson opines. "[I]f anything, his films, with their rejection of rational structures, are more neosurrealist. Rather, the progression in Costa's cinema has been to give voice to his subjects and to treat them as worthy of existing as fictional characters (Bones, 1997); then, to delve further into their world, their personalities, and their ways of living (In Vanda's Room, 2000); and most recently, with great success, to combine the two approaches (Colossal Youth, 2006)." Peranson describes Costa as a "Brechtian modernist"; but, more importantly, heralds his (almost provocative) humanism.
Posted by Michael Guillen at 2/29/2008 11:09:00 PM

I just realized, Michael, that I don't have you on my blogroll. And that I probably sat through another movie in relatively close proximity to you this weekend. Thanks for this. Maybe Thursday we can actually shake hands.

Definitely! I'll be there with Brian, who I believe knows you? I'll make sure we're introduced.

Michael is the one asking the questions. :-)

Another tip: he begins and ends each question with "Thank you." He's very polite.

I look forward to sharing some thoughts -- as well as handshakes -- with all of you after the films. I'll try not to run off this time. I wanted to stay after _Bones_, I did, but my friends were bugging me to get out of there to watch _The Wire_. Plus, you know, I was excited for the episode, too. (I consumed way too much visual storytelling that day.) And maybe Thursday I can stay for all the Q's and A's. I really dig Costa's demeanor, and his answers (duh); he's lazer sharp, if laconic.

BTW: _Bones_? Wouch. That was the real deal. I think I kinda dig it more than _Colossal Youth_. But more on that tomorrow, I hope. Funny: Now I'm afraid of _In Vanda's Room_, even though I'm anxious to see it, too. Like I said in my "link dump," I'm just not quite used to watching this brand of cinema these days. It's a far cry from the purple and yellow and blue pastels (not to mention the rapid pacing) of _Miami Vice_ and _Manhunter_.

Only Girish knows that underneath my good manners is a spray can itching to deface public property.

It's a personal struggle.

Thanks for the plug! I'm jealous you Bay Area-ers are getting to see the Costa retro right after I leave San Francisco! DO NOT MISS SICILIA!

Also, if you are being so kind as to link to my coverage of the NYC Costa series, I suggest you use this link (http://www.d-kaz.com/blog/?p=251) which is more stable and collected than the one you posted.

Ryland, I too thought Bones was great, but after seeing the direction Costa takes with In Vanda's Room and Colossal Youth I found that it started to come off as too deliberate and mannered. I still find the film fantastic though.

Daniel, I wish I would have known you were in San Francisco; I would have loved to meet. Thank you very much for the amended url. Your write-ups have genuinely helped provide a working handle on the series.

Thanks for the notice, Francisco. Best wishes on your new art space. If you could, please give a shout-out to Pedro from his friends on the West Coast.