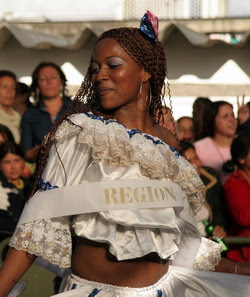 Let it be known that I listen to my filmbuds. If Brian Darr—dispatching to The Greencine Daily from the Sundance Film Festival—says a documentary short is a "doozy", my antennae quiver. "Doozy" is not a word you hear levied about every day with regard to documentary shorts; but, La Corona—co-directed by Isabel Vega and Amanda Micheli—deserves that accolade, among many others.

As Brian explains: "Here's the only film I know where you'll see a would-be beauty queen with a disturbing gang tattoo at the base of her thumb. Or one who gives her lesbian lover a smooch just before being paroled." 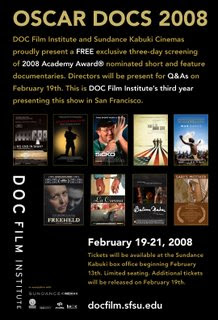 So thanks to Brian's recommendation, and the generosity of the DOC Film Institute's free screenings of the Oscar-nominated documentaries and documentary shorts at the comfortably refurbished Sundance Kabuki, I've had the chance to watch this doozy of a documentary short. Not only an Academy Award nominee for Best Documentary Short, La Corona won an Honorable Mention in Short Filmmaking at last month's Sundance. It chronicles a beauty pageant held as part of the celebration of Saint Mercedes in the largest women's penitentiary in Bogota, Colombia. I had the opportunity to ask a question of Amanda Micheli (Double Dare) and to supplement it with a couple of follow-up questions from her Sundance Kabuki audience; this exchange is not for the spoiler-wary.

* * *
Michael Guillén: Thank you for accompanying your film. La Corona has made me reconsider the value of beauty pageants in general; but, what is the value of this particular pageant for you in having filmed it? 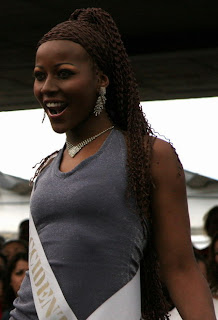 Amanda Micheli: It's hard because I'm definitely a feminist. I've never been a fan of beauty pageants either and—especially in American culture—it's such an extreme sideshow to our reality. I've never known anyone who's been in a beauty pageant. I came in with my own preconceived ideas—which is important to try not to do as a filmmaker—but, I definitely saw that [for] these girls this was something to put their minds to and to apply themselves to. They have found their own identity and purpose in this. Now, I would love it if they could find other things to apply themselves to and actually learn skills and get trained so that they can go out into the world and have lives outside of a prison; but, this is the best they've got. So it's kind of hard to knock it when you see people really getting roused up for something and putting their minds to a task. It's complicated. That's one of the things I like about this topic and this film; it's just full of ironies. I don't really like films that are like: "Yay! This is good for women! Or, this is bad for women!" Life is frickin' complicated, y'know? These girls come from really tough backgrounds and they're in prison and this is something that gives them a sense of worth. Is this what I would choose for them? Probably not. But that's life.

Guillén: Have you followed up with Angela and what's happened with her since she won the pageant and was released from prison?

Micheli: That's the bad news. Angela was killed within a year of being released. It's actually weird because I got emotional watching [La Corona tonight]. It's hard to get emotional when you're working on a film and running around; but, tonight it actually struck me more than it has because I'm calmer than I've been. It happened after we were done with the film. No one knows exactly what happened. She got wrapped up with the wrong crowd and some guy shot her in the back of her head. So Angela's dead, [which] really hit home for us how hard it is for [these women] on the outside and how we really captured this brief moment of respite and joy for them.

Guillén: Will the film's ending be amended to reference Angela's death?

Micheli: Hopefully we will be able to add that to the film at some point, although there has been some debate about whether or not it's necessary. It feels a little too quick. I, personally, think it would be important to put it on there; but, the Academy rules forbid it. They don't allow you to change your film once it's been nominated.

My heartfelt thanks to Amanda Micheli and photographer Petr Stepanek for the images of Angela. My best wishes to her and her team in winning the Oscar! She's got my vote! Cross-published on Twitch.
Posted by Michael Guillen at 2/19/2008 11:26:00 PM