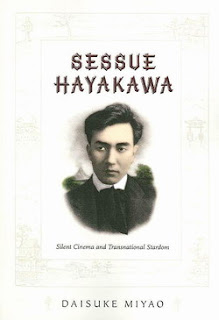 Here at The Evening Class I've been monitoring Daisuke Miyao's study of silent screen star Sessue Hayakawa—Sessue Hayakawa: Silent Cinema and Transnational Stardom (London, Duke University Press, 2007)—for some time now. First, with an overview of the book and an announcement of the Museum of Modern Art program "Sessue Hayakawa: East and West, When the Twain Met"; next, in conversation with Daisuke Miyao; and, lastly, with an announcement of this weekend's Pacific Film Archives "Readings on Cinema" program featuring Professor Miyao introducing three of Sessue Hayakawa's films: Cecil B. DeMille's The Cheat (1915), Forbidden Paths (1917), and The Devil's Claim (1920). 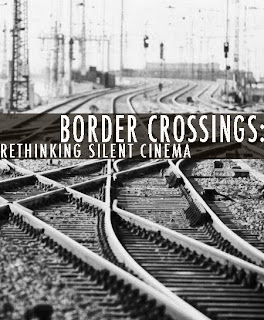 In conjunction with the Hayakawa screenings at Pacific Film Archives, UC Berkeley is likewise hosting a seminar of related interest: "Border Crossings: Rethinking Silent Cinema", February 9 and 10 in the Nestrick Room, 142 Dwinelle Hall. Daisuke Miyao will be among the speakers at this conference that considers how early cinema moves across national boundaries, initiating cultural traffic that re-envisions race, gender, nation, empire, and cinema itself. The "Border Crossings" website provides the conference schedule, commencing with this evening's introductory address "Rethinking American Silent Cinema," Scott Simmon (University of California, Davis); 5:00PM. Panels are free and open to the public and are sponsored by Film Studies, the Townsend Center, the Consortium for the Arts, the Graduate Film Working Group, the Department of Rhetoric, the Department of Scandinavian, the Department of German, the Department of East Asian Languages & Cultures, the Department of Gender & Women's Studies and the Beatrice Bain Research Group.

Of further related interest is the recent news release that Nederlands Filmmuseum—inspired by the renewed academic interest in Sessue Hayakawa's career—has uncovered the only extant prints in the world of The Man Beneath (1919), His Birthright (1918) and The Courageous Coward (1919). All three films star Hayakawa in the leading role, and were produced by his own company Haworth Pictures.

Following the publication of Daisuke Miyao's volume on Sessue Hayakawa, the history of Hayakawa, as "the first Asian Hollywood star" was revived in the public memory. Miyao also researched the holdings of the Nederlands Filmmuseum and in his book refers extensively to His Birthright (1918), preserved by the Nederlands Filmmuseum. In 2007 the Museum of Modern Art in New York (MOMA) organised their Hayakawa retrospective and drew the audience's attention to the remarkable position of this Japanese actor and film producer in Hollywood and his willingness to negotiate between cultures and to disseminate American values.

Anticipating this revival, the Nederlands Filmmuseum decided to re-assess its Hayakawa related holdings in the past years. This comprehensive research revealed that the holdings of three films represented the only remaining footage of these films in the world. 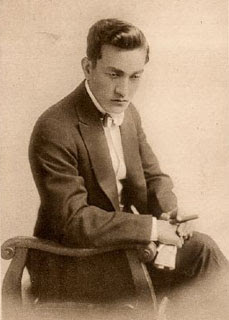 All three titles, produced by Hayakawa himself, reflect the constant negotiation between different cultures and identities in their plot, starring Hayakawa as the lead character in the center of the action. The nitrate prints, acquired through private donations in the eighties and nineties, are Dutch theatrical release copies, carrying Dutch intertitles. Despite their overall good condition, and well-preserved tinted colors, the prints are missing footage. Only The Man Beneath can be considered to be complete. While the first and fourth reels of His Birthright are missing, nothing but the last reel of The Courageous Coward (co-starring Tsuru Aoki) survives.

Considering their historical importance, the Filmmuseum has decided to make new prints of all the three titles, adding explanatory intertitles, in order to be able to present the films to new audiences.