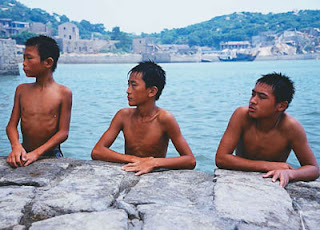 This review was initially written for the catalog for the upcoming San Francisco International Asian American Film Festival. Due to censorship issues in China, the film was pulled from the festival line-up. Never one to waste a written word, however, I offer it here at The Evening Class.

* * *
First-time director Robin Weng's Fujian Blue is an unflinching depiction of the effect of globalization on China's southeastern Fujian province, a departure point for Chinese seeking their fortune overseas, and consequently a notorious hub of illegal emigration and human trafficking. The film delivers an absorbing indictment of the lure of Western materialism on the current generation of Chinese youth and its corrosive impact on family cohesion.

Turning his lens on three cities in particular—Fuqing, Changle and Pintang—and casting non-actors, Weng achieves a naturalism in detail that borders on investigative documentary. The well-publicized deaths of illegal Fujianese workers in Morecambe adds haunting gravity to Weng's bifurcated but interwoven tales of young people from the embattled Fujian province pressured to come to terms with New World economics. 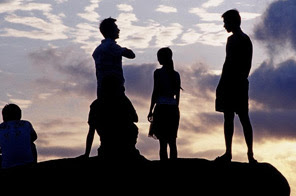 The first story "Neon Knights" details how fankepo—"remittance widows"—are preyed upon by a gang of kalu, local lovers who maneuver wealthy lonely women into cheating on their husbands working overseas. Once compromised, the women are blackmailed and extorted. The gang's pseudo-leader, aptly-named Amerika, turns his gang on his own philandering mother without realizing her connections to the Fujianese underworld. The second story "At home, At sea" follows the ill-gotten money to Pintang where Amerika's friend Dragon chooses to use it to save his family from debt incurred sending an older brother to England. The cycles of sacrifice become compounded, however, when Dragon's plans go awry.

Fujian Blue, a co-winner of the Vancouver International Film Festival's "Dragons and Tigers Award" for independent Asian cinema, marks a notable debut from one of China's new wave.
Posted by Michael Guillen at 2/13/2008 08:25:00 PM