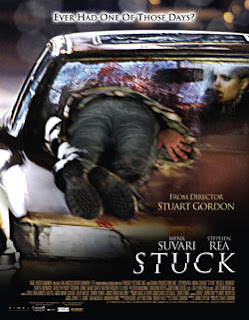 Stuck is a thrillingly outrageous howler. Its IndieFest audience was yelling at the screen even as they were laughing and shouting, "Bravo!" This under-the-radar thriller came highly recommended by David D'Arcy when we swapped tips at the Toronto International. D'Arcy wrote it up for The Greencine Daily as "a dark tale of an accident gone awry—if that's not a conceptual oxymoron." Twitch teammate Andrew Mack likewise praised how director, Stuart Gordon, took a "horrible story of inhumanity" and "turned it into an excruciatingly funny and dark film that surprises as much as it shocks." Mack concluded: "Car crashes should never be this entertaining but thank god this one was."

Blake Etheridge prefaced his Twitch interview with Gordon, scriptwriter John Strysik, and actress Mena Suvari with a detailed synopsis of the real-life atrocity on which Strysik based the film's script.

Variety's Joe Leydon likewise caught Stuck at Toronto's Midnight Madness and described it as "ingeniously nasty and often shockingly funny as it incrementally worsens a very bad situation, then provides a potent payoff with the forced feeding of just desserts." He characterized the film's violence as "more unsettling and most hilarious" precisely for being emotional, not physical, as Suvari's character Brandi "gradually reveals the full measure of her sociopathic selfishness." That reveal is an "excellent counterpoint" to Stephen Rea's "pitch perfect performance" as he gradually recognizes and faces the dark force of her selfish inhumanity. As Leydon writes, Rea's performance as Tom suggests "the best hope for a loser is to be placed in a situation where you have absolutely nothing left to lose." Being placed in that situation is exactly the horror in this piece where the monster, as Film Experience identifies, is "towering self-involvement."

The perfectly-pitched performances of the film's ensemble coupled with Gordon's astute choices of where to accent the inhumanity with humor secures Stuck's winning affront. It's a sleazy little gem with a B-flick kick. Mena Suvari—who boldly forsakes the rose petals of American Beauty for the sharpest of thorns while "donning cornrows for a certain white-trash edge" (Scott Tobias, The A.V. Club)—comes off as vulnerable, confused and frightened as this crisis begins and only gradually shatters the audience's trust as she reveals herself as a ruthless creature of self-interest. 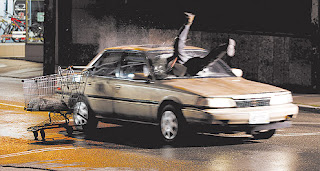 Stephen Rea is the woeful everyman in Gordon's cautionary tale of choice. Down on his luck, skirting the gravitational pull of homelessness, he is repeatedly offered dead-end options in the guise of choice. Throughout the film and within the subsidiary performances, each individual has the moment of choice when they can be humane or not—whether the landlord ransoming belongings for rent, the social service worker using a malfunctioning computer as an exclusionary fence, the policeman patrolling "public" space, Latino neighbors unwilling to help or become involved for fear of deportation, or Brandi and Rashid gripping a victim's life in their inept hands—Gordon etches the horror of the wrong choice or—as David D'arcy wraps it—"There are always plenty of reasons for doing the wrong thing, and the wrong thing drives this movie." But not only. Gordon balances his caution with the compassionate generosity of a homeless stranger and a small child offering his hand at film's end. This is a horrific film to watch; but, not necessarily a bleak one and that's the film's redeeming strength. As much as it details man's inhumanity to man, it reminds of the capacity to do the right thing.

If you missed its scheduled screenings, IndieFest has added one more at the Roxie Film Center on Thursday, February 21, 9:30PM and you would be woefully remiss to not catch it.