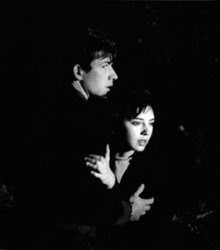 That has not made critics reticient to appreciate O Sangue on its own merits. Dispatching to Senses of Cinema from the 43rd Vienna International Film Festival (Viennale), Michelle Carey proclaimed O Sangue as "undoubtedly one of the most remarkable film debuts of the last 20 years. Filmed in milky black and white, each shot is so carefully composed the film could well be a montage of a thousand photos were it not for the emotive, intelligent dialogue, …dreamy orchestral score and excellent use of pop music." Carey added, "It is probably the only Costa film (save of course the Straubs documentary) to reference other cinema—the 1950s teen dramas of Nicholas Ray, as well as Badlands and The Night Of the Hunter. …O Sangue mixes the pop with the intellectual-political, assuredly blending the boundaries."

In his Artforum essay, revised for the Still Lives brochure, James Quandt wrote: "There have been few more prodigious debuts than Pedro Costa's O Sangue. One of those first films that feels like the unleashing of pent-up forces—long nurtured visual ideas, banked homages to favorite films and directors, a romanticism unseen since early Leos Carax—O Sangue was also something of a false start, in the sense that its dreamy, nocturnal tone, conspicuous cinephilia, and showboating camera work did not establish Costa's true path, which was towards a spare, materialist cinema." 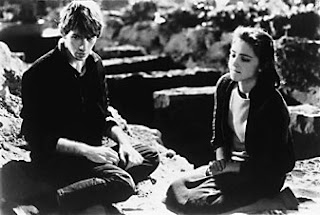 At Strictly Film School, Acquarello has underscored "the characteristic imprint of what would prove to be [Costa's] familiar preoccupations: absent parents, surrogate families, unreconciled ghosts, the trauma and violence of displacement, the ache (and isolation) of longing." Presciently, Acquarello has likewise drawn a similar contrast "between the abandoned, rural family home and the sterile, anonymous apartment buildings where the brothers are held against their will" and has translated the similarity "as a prefiguration of the Fonthainas diaspora itself, from the transitory sanctuary embodied by dilapidated, condemned spaces (In Vanda's Room), to the soullessness of uprooted communities represented by impersonal, high density, public housing (Colossal Youth)."

Though Daniel Kasman has qualified his praise with a critique of the film's overmannered lack of continuity and coherence, he nonetheless finds O Sangue "unabashedly gorgeous."

Pedro Costa's following commentary on O Sangue has been gleaned from the Q&A session following the screening of the film at the ongoing Pacific Film Archives retrospective. My thanks to Susan Oxtoby, Kathy Geritz and Shelley Diekman of PFA for their kind assistance.

On Working With His Young Actors
Nuno Ferreira, who plays the part of Nino in O Sangue, was the youngest actor in the cast. He was only 9 or 10 at the time of shooting. There weren't many child actors in Portugal at that time and—though Costa considered the child actors he was familiar with—he came up with the idea of going to a boy's orphanage, a Catholic school, to talk to the priests. He explained he was making a film and that there was a part for a young boy. In retrospect, Costa doesn't really know where this idea of casting an orphan came from ("it was probably unconscious") but, it was close to the overall mood of the film. Immediately he found Nuno, who he liked very much, and the priests accepted his proposal. Nuno was nearly feral, however, and difficult to control on the set. 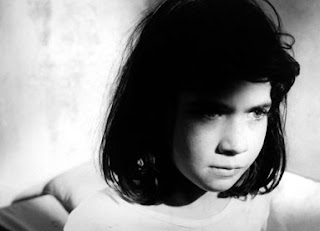 That was not true for the other young actors. Inês de Medeiros, who played Clara (and who went on to star in Costa's Casa de Lava and Ossos), continued her career as an actress and, according to Costa, is now directing. Pedro Hestnes, who played the older brother Vicente, has likewise continued his acting career. Even though Nuno was wild and difficult to manage, Costa was very happy with him. He was how Costa imagined Nino or, as he offered: "Probably, I saw a lot of myself in this boy at his age."

After O Sangue, Nuno went through a difficult period. Most of the boys in the Catholic orphanage only lasted until they were 15 before running away. Others stayed until they were 18 years old, at which time the Church helped find them employment, training them to make tables or comparable work; but Nuno was one of those who ran away at 14 or 15. For a while Costa lost contact with him, though he was aware Nuno had moreorless become a mechanic. Then he heard Nuno had become addicted to drugs. As ironic as life is, Costa ran into Nuno in Fontainhas, the Cape Verdean-populated Lisbon district and the site of his later films, where Nuno had come to score his heroin. "It was very strange," Costa remarked quietly, "I was working in this place and this actor who was my dream child was now a junkie." Admitting his impulse to somehow "save" Nuno, Costa proposed work to him, not as an actor but in some capacity on the set, just to funnel some money his way; but, Nuno refused. "He was wild and suicidal," Costa described and he has since lost touch with him, though he has heard Nuno married.

On the Theme of Orphanhood & Absent Mothers
Having just seen Colossal Youth the day before—a film wherein the mother abandons her husband and children in the first scene and where an indefinite patrilineage seemingly drives the narrative forward—the longbody trace of this theme from Costa's first film to his most recent is intriguingly apparent. Costa had likewise mentioned that—as far as Vanda Duarte was concerned—Colossal Youth revolved around her seminal question: "How can I be a mother?"

Whether one wants to entertain the broad stretch that the absent mother in Colossal Youth can translate as an assertion that there is no State to take care of the marginalized Cape Verdeans and that, in fact, the State is responsible for displacing them and pulling them further away from "home", it's unlikely Costa intended such an interpretation. Though he acknowleged that, yes, there were absent mothers in both films and, yes, there was this strange woman in the end of O Sangue (Isabel de Castro)—the father's mistress who could be thought of as a substitute mother—and though in fact many of the characters in his films could be thought of as parental figures of substitution, Costa complained that he didn't really like to talk about his films that way. "That's for the critics," he quipped drolly.

What Costa would offer is that in each of his films there are elements that do reappear, namely a poetic figure who represents "two or three things." For instance, one thing in each of his films that is exactly the same thing is literally a representation of dead weight, something heavy, what I might call a texture of gravitas. In O Sangue the young characters struggle to be rid of this weight, which in their case is this father encased in a bag emptied into the river. Casa de Lava sports a similar weight (though I have not yet seen the film and will need to reserve comment on the particulars). In Ossos the weight or burden becomes a baby, which Costa remarked, "Passes all along the film as a figure of death and life." This very strong baby dies, but then doesn't actually die. Everybody wants to sell it and buy it and—even more mysteriously—the baby's father becomes its mother somehow, so that the question is raised: "Who is your mother? Who is your father?" Or as William Goyen stated in his own architectural reverie The House of Breath: "What kin are we to each other anyway?" Costa conceded that his is a dream of "recomposing the family" to become as big a family as he can make it and claimed he had found such a recomposed family with the Cape Verdeans he's working with now; "Which is more than a family," he asserts, "it's a community." They're all his cousins, nephews, sisters.

On the Sound Design
Placing Costa's first feature O Sangue alongside his recent Colossal Youth elicits another flint-like spark of recognition involving his use of sound. The radical difference between the two films, the shift away from reliance on the non-diegetic to a somewhat organic discovery of the diegtic—from more to less one might say—is pronounced by contrast.

Costa admitted that the sound design for O Sangue is very simple precisely because O Sangue was "a classical shooting." Costa's friend Pedro Caldas did the sound for O Sangue and he basically used the conventional formula of combining direct sound from filmed scenes with extra sounds added in editing. Now that Costa has the "luxury" of more time in which to construct his films, that luxury is extended to his technicians. Olivier Blanc is currently Costa's sound person and Costa described him as someone who "does his own film and is always in motion." Along with Costa's notoriously voluminous takes, which time and DV allows, Blanc has been creating his own archive of sounds from Fontainhas from which Costa borrows to effect his sound designs. Though some of his sound comes direct with his filming, others come from Blanc's archives who—because he is not fighting against a schedule of a certain amount of days he can record—can afford the time necessary to record the real life of Fontainhas and, now, Casal Boba. Because they both have more time, they can collaborate on the sound editing and can compose a design environmentally if not exactly diegetic; a true "soundscape". Cosa recalled having a very low budget for filming O Sangue, let alone little time for editing, everything was very hectic, so for ease he utilized music. This was also partly due, he admitted wryly, because he was "completely enchanted with American movies and their music so I committed some crimes, like using Stravinsky."

Ah, good catch on Vanda's comment about being a mother in Colossal Youth. I do remember thinking at the time that her parental skills were bordering on neglect or even child abuse in the way she just leaves her alone to almost raise herself.

Of course, the really important question is, were you also thinking of frolicking M&M's during that scene where Vicente and Clara walk to the fairgrounds. ;)

Heh. That entire fairground sequence was my favorite in the film. Especially after the body is recovered from the river and Clara, suddenly stricken with conscience, wants nothing to do with Vicente and goes off to flirt with the other boy. There's that scene where Vicente runs by them into a plume of white bright smoke against which he is a dark running silhouette, until he is swallowed up by the white smoke. Hypnotically noir.