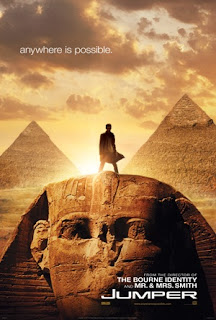 I liked Jumper so much that I wish I could be the chump who could jump right into (what I assume will be) the sequel. Do I really have to wait?

David Rice (Hayden Christensen) discovers he has latent powers to teleport any place he visualizes. His initial reaction is to escape from a stifling home environment, school bullies, and poverty. In no time at all he beams himself in and out of bank vaults and scores big money, a penthouse suite, and global access. And just when he thinks he has it made, sitting on top of the world (or, at least, the Egyptian sphinx), along comes Roland (Samuel Jackson)—a "Paladin" committed to ridding the Earth of "jumpers"—as well as Griffin (Jamie Bell), a firebrand jumper equally committed to resisting and defeating the Paladins. Add luscious girlfriend Millie (Rachel Bilson) and an absent and enigmatic mother (Diane Lane, in a charismatic performance that bears no trace of Untraceable), plus locations in New York, Rome, Tokyo and Egypt, and kick-ass jumping effects and you have all the markings of an entertaining action sci-fi thriller. 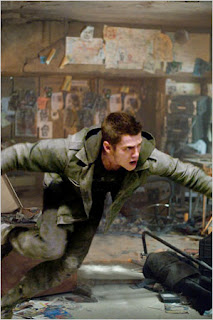 But wait, there's more! This film is enrichened by believable character arcs that the sequel can only serve to deepen. Christensen plays his bruised soul to perfection. Yes, it's a superhero cliché that with great power comes great responsibility, something every young superhero needs to learn, but it's genuinely engaging watching Rice mature from a self-serving teenager to a young man giving thought to using his powers to help others. You truly sense that hiding his secret and living alone with so much power, even if it secures him material wealth, simply is not enough. The chemistry between Christensen and Bilson is sweet and sexy, which—linked to the film's opening on Valentines Day—reminds that Jumper is basically a love story about two people learning how much they can really reveal and share with each other. I imagine it will be the perfect date movie.

There are also solid veins of inquiry. As Rice learns that his gift has passed down through generations for millennia and that—like it or not—he is caught up in something of an ongoing holy war; Griffin guides him to make the historical connections between the Paladins and the Catholic Inquisition. The Magisterium's ageold dispute against divine immanence takes a pop cult turn in Roland's zeal to destroy anyone who possesses the power of God to move at will. Roland is not just a basic bad guy cut from dark broadcloth, however; Jackson exhibits genuine concern that the power bestowed upon jumpers inevitably drives them to madness and evil. One senses feral Griffin leaning that way. And one can only wonder if Rice's protestations that he's "different" will be borne out? I sure would like to know right now. Where's a worm hole when you need one?

This film opens here this week. I was ready to dismiss it, but your exuberant review has led me to reevaluate my initial impression. I might just go and see it with my son.

I hope you enjoy it as much as I did, Paul. I'd be curious to know what your son thinks.

Your mention that the movie is simply a love story between two peeps wondering what they can share about each other, reminded me of the book The Time Traveller's Wife. The main character was also an aimless, tortured soul (with a 'punk rock-ish' edge) who was in love with a woman who loved him and did her best to live with his 'gift.' However, the main character shouldered his genetic disorder selfishly because he had no control over it i.e. when and where he would travel. I think it would make an awesome movie. In fact, when Brad Pitt and Jennifer Aniston were married, they purchased the film rights or something to that effect. I hope that one of them continues with the project; it was a damn good read that would translate well on screen.

Audrey Niffenegger's acclaimed novel The Time Traveler's Wife is an apt analogy, Reader; thanks for bringing it up, though jumpers conquer space more than time (though there is an inference that time travel is possible).

You'll be pleased to know that The Time Traveler's Wife is in production with Eric Bana and Rachel McAdams in the lead roles.

Liman was the perfect choice to express this action-packed love story. There is a similar dynamic between Rice and Millie as there was between the assassin couple Mr. & Mrs. Smith.

I have to say, I enjoyed Jumper a lot too, but you see a lot more in Christensen's performance than I do. I thought he was incredibly blank, and that especially the romantic scenes were very flat and unconvincing.

Oh well. I AM looking forward to a possible sequel, because that might dig a little deeper.

Thanks for the comment, Sarcastig. Mileage always varies on performances in vehicles like this. I really didn't like Christensen in the Star Wars films, did enjoy Shattered Glass and felt he's come a long ways and has matured his range. I'll admit he has a way to go yet; but, I'm not displeased with his work here.

Sigh. Unfortunately the initial critical reception has been less than favorable, according to The Greencine Daily's aggregate. Grady Hendix’s comment is the most fair, I think: “As a professional pretentious person, it would be easy to be harsh on Jumper; but, if I had to pay for my own tickets, this is exactly the kind of fun little movie I’d want to see on a Friday night.”

So viewer beware. You may just enjoy this movie no matter what the critics say.