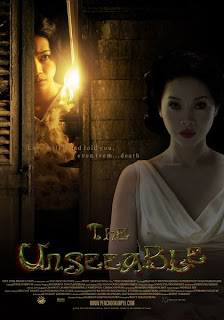 Effectively (intentionally?) playing the scares for laughs and eschewing the oversaturated confectionary palette of his two previous films—Tears of the Black Tiger and Citizen Dog—Thai director Wisit Sasanatieng's third feature The Unseeable maintains a menacing enough atmosphere, primarily through a fantastic haunted country house and its surrounding compound, the shift to a shadowy grey-green palette, and a cascading "wait there's more!" finale. It seems that every available ghost story trope has been enfolded into the script, written this time not by Sasanatieng himself but by Kongkait Komesiri (Art of the Devil 2). 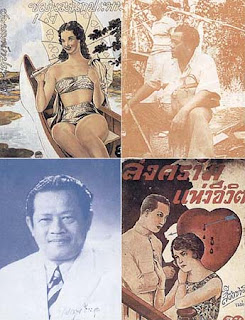 What redeems what you see coming a mile away in The Unseeable (a title which is only partially apt) is its stylistic inflection through regional Thai folklore. In this, it is a commendable example of what Taiwanese director Hou Hsiao-hsien proposed in his 2002 Rouge seminar, which I've quoted before—in conjunction with (in fact) another Thai horror film The Ghost of Mae Nak—but, it bears repeating since Thai filmmakers seem to be paying skillful attention. The crucial element of the success of a horror genre piece like The Unseeable "lies in the use of local elements. The films," Hsiao-hsien argues, "are firmly rooted in local culture." This is confirmed in The Unseeable's attributed inspiration of famed Thai art master, Hem Vejakorn, whose published drawings capture the diversity of Thai culture. The film's lighting design especially was based on Master Hem's style, faithfully bridging canvas and film. 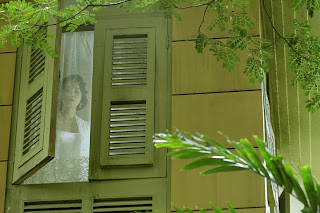 The Twitch team has been all over this one since inception. Todd Brown offered a series of teasing glimpses via a first and second trailer, production stills and posters in early October 2006. Stefan followed through with his own review in February 2007 and Todd announced the DVD release in April 2007. 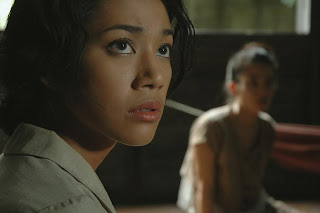 My favorite character in The Unseeable is the haunted house, which reflects a blend between the popularity of the French Art Nouveau (i.e., the upper class) with the more traditional rural stilt houses of the countryside (i.e., the peasant class); a collision of architectural styles that exemplified the late 1920s-early '30s. The house, in worn disrepair surrounded by overgrown gardens, was found in Pakchong, Nakornratchasima and provides the atmospheric mise en scène for The Unseeable's unsettling weave of class conflict between Nualjan (Siraphan Wattanajinda)—a young pregnant girl from the country searching for her missing husband—and Ranjuan (Supornthip Choungrangsee), the exotically beautiful madam of the compound whose erotic moans at night underscore her mysterious allure. Tassawan Seneewongse does a camp turn as the Thai version of Rebecca's tortured Mrs. Danvers, up to her neck in ghostly goings-on, and Visa Konska as the talkative and superstitious boarder Choy chews up not only the scenery. And I may be mistaken but I believe that's Citizen Dog's Grandma Gekko clinging this time not to the overhead light but to the windowsill. Will someone please give her back her baby?

Final analysis? Not great, but a fun reminder of the greatness to come (hopefully) from the sensuous imagination of Wisit Sasanatieng.

Darn, ya beat me to it. I have the DVD but haven't gotten around to seeing it yet. I could have seen The Unseeable theatrically with English subtitles during my first week in Thailand, had I been a bit quicker in getting myself situated.

Hi Peter. Thanks for stopping by to comment. Let me know what you think of the film once you've had a chance to watch it.

I just watched "The Unseeable" yasterday, but however, at the end
of the story, I don't really get it..
I mean, does everything happen in that haunted house are real?..
Does Nualjan deliver her baby for real?
or..The stories in that house just happen to Nualjan because
even till her death, she can't believe her husband had a wife
previously? Meaning to say, as what Ranjuan asked her gothic housekeeper (Do you think
she - Nualjan will still believe her husband cheated to her before?)

Owh, i really need someone answer me for the stories, its too twisted
but overall i enjoy the entire movie..

Hi A-Boo, thanks for stopping by to comment. It's been a while since I've seen the film; but, at the risk of spoiling it for others who might catch it on DVD, and if I recall correctly, the final scene reveals that the film's events have all been in the ghost's imagination/memory.