Citing Goethe as literary precedent—"I was, after the fashion of humanity, in love with my name, and, as young educated people commonly do, I wrote it everywhere"—Jon Reiss then explores nature's (i.e., the human ego's) horror vacui in his energized global graffiti documentary Bomb It!—my "don't miss" pick from the 10th Annual San Francisco IndieFest.

Retaining the revolutionary cry for action inherent in the graffiti art form, Reiss tempers that cry with a sense of social responsibility (keenly aware of that term's malleability) as well as providing a thoroughly captivating overview of the art form's cultural variance in cosmopolitan centers around the world, namely New York, Paris, Amsterdam, Berlin, London, Barcelona, Capetown, São Paulo, Tokyo and Los Angeles (though several others are featured on the film's Flickr site). 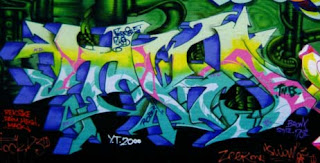 Tracing street graffiti's origin to Philadelphia where "Cornbread" came to the realization that—if everyone was talking about him because he'd written his name all over the walls of the jail where he was serving sentence—how much more would they talk about him if he took it to the streets? That aesthetic of self-promotion was amped up by New York's Taki 183 who—in his job as a messenger—spread his nickname all over New York's five boroughs, inspiring the next generation of ranging "street soldiers" committed to "bombing" the system by competitive tagging. That range increased further when TKID began tagging New York's subway trains, creating a veritable "museum on wheels."

This urban art form took a major leap when Tracy168 and his team developed "wildstyle" graffiti with its aggrandized expressions of the alphabet, with Lady Pink paving the way for female graffiti artists to compete with their male counterparts. 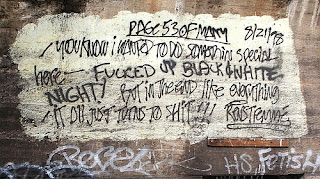 When Simon & Garfunkle sang that "the words of the prophets are written on the subway walls and tenement halls", they might as well have been referencing the autobiographical strategy of REVS who claimed those spaces to diarize his existence when tagging trains became problematic and ineffective. Unfettered by aesthetics of beauty, the power of REVS' work lies in its commitment to anarchic spectacle. He's also situated at the pivot where—in an effort to contain and control the burgeoning graffiti movement—it was criminalized.

Contextualized as a "gateway crime", street graffiti initiated the ongoing debate and fight for control over public space and the ensuing global proliferation of "Quality of Life" behavioral modification laws. Reiss has perfectly pitched this debate in his documentary, giving voice not only to the urban artists who protest foisted gentrification and its class-structured arguments of neutral space but the anti-graffiti advocates who question and seek to exclude its presence. Eloquent in this regard is Marc Ecko's refutation of the "broken glass" theory that if you "clean it up", you get rid of crime. "Issues that are messy," he states, "classrooms, class structure, you can't cosmetically sandblast those off a wall. They are much harder to legislate around and to get people to understand." 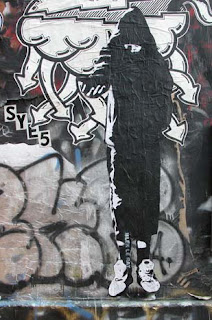 Bomb It! is essential for any comprehension of the birth and development of the street graffiti movement within the United States, but it intelligently ventures further to situate this urban art form in global resistance, providing an essential "who's who" of the global graffiti community. I was particularly impressed with Paris street artist Blek the Rat who has adopted the rodent as a symbol of freedom. Blek's stenciled work adapted the New York wildstyle lettering to the environment of Parisian architecture. Placing his work in dilapidated structures, Blek confesses to an almost "supernatural relation to the past." Adamant that art should serve a social cause, Blek focuses on the plight of the homeless, further accentuating the great divide between the haves and the have nots via the continuing tension between private and public space. 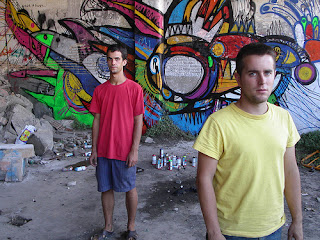 Barcelona's street graffiti scene is likewise aesthetically captivating. Kenor & Kode appropriate architecture in a wildly imaginative and colorful collaboration. When they saw each others' work it was "love at first sight." PEZ likewise caught my attention with his awareness that the iconic travels further than mere lettering. He uses a fish to promote himself. 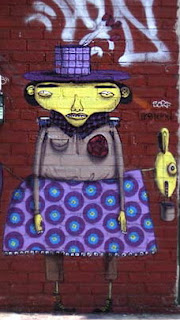 In São Paulo the work reveals a concentrated effort to resist the mass commodification of public space by either reclaiming contaminated space, co-opting corporate images, or posing the question of—not so much what is beautiful—but what is ugly? The work of Os Gêmeos ("The Twins") seeks to capture the inhabitants of São Paulo through carnivalesque yellow-skinned caricatures. Nina aggressively creates portraits of wide-eyed children to comment upon the fact that so many of them are forced into prostitution. Nunca—working against what he felt were the illegible characters of wildstyle lettering and responding to the verticality of São Paulo's skyscrapers—developed a lettering style that separated characters and elongated them. Zezão, in some respects, emerges—in my estimation—as the most radical of them all for reclaiming contaminated space and leaving his blue-themed art in darkness, surrounded by roaches, sewage and trash, where few will ever see it. It's his "gift" of healing to a filthy, diseased city. 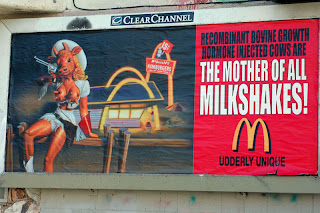 Yet another fascinating and controversial issue raised by the documentary is whether or not graffiti can go mainstream; taken off the streets and placed in the art galleries? Is graffiti on canvas the end of graffiti? Is the commodification of graffiti its antithesis? Is it stripped of power when its criminality is sanctioned? How various graffiti artists negotiate the dance between their street credibility and mainstream acceptance is enunciated through a series of testimonials. Shepard Fairey's "Obey Campaign" is perhaps the most singularly successful crossover that retains a philosophical integrity. In its very commodification, it comments upon commodification. The billboard art of Ron English not only addresses the "visual pollution" of billboard advertisements and its intrusion upon public space through private enterprise, but notates the control over access. When he tried to place a billboard in Toronto that read: "Support Divorce: The Great Heterosexual Institution"—his way of expressing solidarity with the issue of gay marriage—he was told there was no way that statement would ever be advertised on public signage. "There is no democracy without public space," English cautions and adds, "What good is an idea if you can't disseminate it?"

There is a wealth of ideas disseminated in Jon Reiss's Bomb It! It's been a while since this reviewer has been prompted repeatedly to think and found it so entertaining. Again, don't miss this one!