Can Paranormal Activity Be Seen? 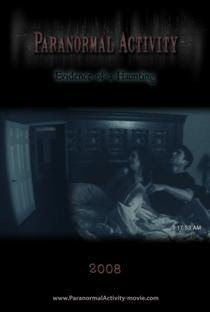 The question entitling this entry is purposely loaded. Sure it could be approached ontologically; but, for my immediate purposes, it's simply pragmatic, if not litigious. Apparently, one of the first conditions of the deal director Oren Peli struck with DreamWorks—who purchased domestic and remake rights of Paranormal Activity at Slamdance—is that Peli's original is to have no further exhibition, including the two Bay Area festivals where it was scheduled to play: San Francisco's IndieFest and San Jose's Cinequest.

Jens Michael Hussey, Director of Public Relations for Cinequest comments: "It's always disappointing when a film gets pulled from the lineup for whatever reason, but that's part of being a festival and part of the process for films to come out of the gate and get noticed and purchased. Our mission is to get these films to their audience and sometimes that entails a scenario that's not a first choice for us but is good for the filmmaker. If the filmmakers felt this was the deal they wanted to sign then ultimately we understand that and we certainly abide by the legal restrictions that ensue. It's our policy to ONLY show films we have a legal right to exhibit."

DreamWorks representative Chip Sullivan offered: "It's not that we don't want anybody to see Paranormal Activity; but, the reason filmmakers go to film festivals is to sell their films. Once we bought it and now that we own it, we have to think of a strategy of what exactly we're doing about the remake and all that. We could keep showing it but we have no vested interest in having it be shown until we determine internally what we're doing with the movie. That's sort of typical of all films that go to film festivals; once it's sold, it's off. These films that don't have a distributor; once the distributor picks it up, the game's over." Though Sullivan couldn't confirm whether Peli would or would not be tapped to direct the remake or whether the original version would find its way to DVD, he stressed how excited Dreamworks is to have the property and that only time will tell the particulars of the distribution. 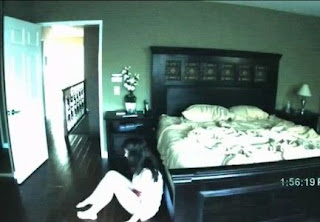 The Bay Area festival cancellations are only the most recent events of interest surrounding Israeli émigré Oren Peli's effectively creepy lo-fi supernatural thriller. Paranormal Activity screened at last October's Screamfest, where it won an award and received a rave review from Dread Central's Debi Moore who was impressed with the film's palpable sense of dread. "I'd bet cash money," Moore wrote, "nobody can watch the entire thing without saying at least three or four times, 'That's some fucked up shit.' Or, more accurately, 'That's some seriously fucked up shit.' " Though originally she was just about to write Paranormal Activity off as "another entry in the long line of pseudo cinéma vérité rubbish we've been subjected to during these last several post-Blair Witch years", Moore found herself drawn into the film's microbudgeted scare tactics.

It's true that since The Blair Witch Project, the "found footage" trope has been used almost to death. Though not quite a "fake documentary" and not humorous enough to be a "mockumentary", Paranormal Activity sifts what is frightening from ordinary events and effectively does so through documentary direct cinema strategies. The film starts out claiming that the footage has been obtained through surviving family members. Interestingly enough, in his interview with Dread Central, director Peli posed as if the footage—allegedly shot over the course of three weeks in September and October of 2006—was truly "found" and authentic and that the "record" of the paranormal activity was edited into his feature length presentation. Clearly this is a promotional ruse that Dreamworks will not be able to employ.

Where Paranormal Activity breaks out ahead of Sci Fi Channel's ubiquitously programmed Ghost Hunters and International Ghost Hunters is that it's paced naturalistically, the dread is timelapsed incrementally, and most of what happens occurs while the protagonists Kate and Micah are asleep. Whereas the handheld camera was used to question the ethics of media reportage and redaction in Brian dePalma's eponymous Redacted—as it was in George Romero's Diary of the Dead—and whereas along with those two films Cloverfield sought a sense of immediacy and presence through vérité effects (while sacrificing reality to its special effects), Paranormal Activity emphasizes naturalism, capturing when the natural shifts into the supernatural, and the ordinary into the extraordinary, cognizant that the anticipation of that moment is the gist of dread. All it takes is for a door to move or a blanket to shift or a shadow to cross a threshhold to make the hairs raise on your arms and neck.

So where does that leave San Francisco's festival audiences? Disappointingly—other than for the trailer up (momentarily?) at the film's website—they won't be (legally) seeing Paranormal Activity anytime soon.

Heh. I can imagine what Jeff Ross's comment would be. He shows remarkable restraint in his not-commenting. Cinequest's comment is pretty typical public relations hogwash -- no doubt they're plenty mad. It's always maddening when a film gets pulled by a distributor after they buy it. Personally, I think it sucks. They should honor the filmmaker's original commitment -- it's not as if a couple more showings are gonna hurt their precious bottom line. When I was at IndieFest we had plenty of filmmakers honor their commitment even after their film had been bought. Then again, it wasn't ever DREAMWORKS that bought them.

I couldn't agree more and that's why I felt compelled to write this sorry event up.

they showed it a couple times in SF. i was at the last showing and was one of the last people to sit down in the packed theater so i got lucky. awesome movie and a great cinema experience. everyone was screaming, some dude next to me was freaking out.. at every little thing that happened. it was hilarious. kind of sucks that they're remaking it i think...

That's what I heard through the grapevine, Lyle. Glad you were one of the lucky ones to see it on the big screen. Thanks for stopping by to comment.

yea i texted all my friends the day after telling them to go check it out...saying things like "one of the best horror movie ive seen" and whatnot. they were like "when is it showing?" i'm like..."i have no idea". now its just getting ridiculous, it seems like never. sucks cuz by the time it comes out they'll probably have forgotten and i dont know if i'd recommend them to check out a remake.

your entry's the only one talking about it since dreamworks picked it up.. no articles, nothing. the site for the movie seems to be down as well...

My link above to the film's website still works and still has the trailer up, amazingly. Again, just be grateful dude that you were one of the few to see it before it was yanked.

I'm not holding my breath on the remake.

I heard through my friend in LA that Dreamworks have also picked up The Ghosts of Crowley Hall recently too. This is a very similar movie to Paranormal Activity, so not sure if there's a connection there. Their site is still up though and the movie is still available to buy.

Thanks for that info, Stevie!

Kind of you to say, James. Thanks for stopping by to comment.