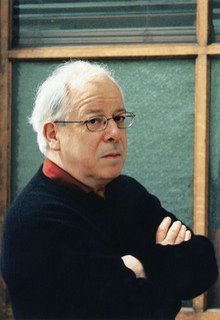 David Thomson has a sweet tooth. I discovered this recently courting an interview for the premiere issue of a magazine that never got off the ground. It wasn't until I offered to stop by with some pastries from L'Boulangerie that he said, "Now you're talking!"

A cup of coffee and a pineapple cornmeal tart in front of us, David and I talked some on his Pacific Film Archives series—A Thousand Decisions In the Dark—currently in progress.

* * *
Michael Guillén: Why A Thousand Decisions In the Dark? That's a lovely image. How did you group these films under that image? What is the uniting theme?

David Thomson: This went through some stages and what's happened is that different bits of stages have come together. This began as an idea of Edith Kramer's. She said quite some time ago, "Would you be interested in presenting a program where the key was what went wrong with this film?" I said I was interested but I didn't think about it too much. We had to come up with some working title. That's where A Thousand Decisions In the Dark came up. The idea being that—when you're making a film—decisions are being made all the time that more or less controlled and organized. They're not all correct and they're not all right because they don't know what the right answer might be. Therefore, often in films there are things that are mistakes that are actually very beneficial. So that came out of that. Then as we were thinking about it more—this is where the real theme of the series comes up—I decided I wanted to deal with films that address the breakdown of genre in the late 1950s. I wanted to concentrate on a period where I feel Hollywood is losing its confidence, losing its structures as a business, and the genres that have worked very well there for 40 years on and off suddenly fall apart and some quite amazing films come into being because they're going through the cracks and they're multi-genre. They partake of many different narrative formats and rules and conventions and they play them off each other. They start doing things with movies that no one had really done before and it changes the potential. It's a most interesting period creatively because of that and I wanted to draw attention to it.

Guillén: The films you chose for the series—Touch of Evil, Rio Bravo, Vertigo, Some Like It Hot—I presume are just a selective sample? Were there many more films that, within your thematic focus, were created through the cracks? These were just highlights?

Thomson: Highlights. I chose them because they're quite well-known. I could have chosen another four, another four….

Guillén: I like that. You were saying in your program notes that you chose them because of their familiarity, on the assumption that such familiarity would lead to more of a conversational interaction with your audience. I appreciate that because there's sometimes the tendency for curators to promote obscure films that audiences have had no chance to formulate any opinion about whatsoever and, consequently, have nothing to add to the discussion. I imagine your approach will enrichen the discussion.

Speaking, then, of approaches, recently I was reviewing some notes I had taken at a lecture by Phillip Lopate on American film criticism wherein he investigated the ways to approach a film. Amplifying a bit on that theme, and knowing that you have curated programs for Pacific Film Archives in the past, how do you go about approaching a series like this? What goes into choosing the films? Or, in effect, proposing your audiences? You are assuming that you'll draw an audience familiar with these films who want to talk about them.

Thomson: This is a departure for me. I have not taught since 1981.

Guillén: You didn't do The Whole Equation PFA series?

Thomson: I did, but, [there] I just presented the film and sometimes there was discussion but it was not like this is going to be. This is somewhere inbetween real teaching and introducing a film. There's a definite attempt here—and I hope it will be borne out—to build an audience who will come, perhaps, to all of them and will follow through the series. They won't have to do any work for it beyond see the films, think about them and talk about them, but for me it's a way of getting back into a teaching-like format without really teaching, without taking on the whole load of a course, which I don't want to do. It's only a few films. It's not as many as you would have in a full term. Ideally, I would have compressed them all a bit more closely together too but for the PFA they have to be every week. That's okay.

Guillén: Along with the four films you've chosen from the '50s, you've tagged on two films that are from almost a decade later from the period you're focusing on—Pierrot Le Fou and Bonnie & Clyde—what was the idea there?

Thomson: Because I think they are films that show the fruits of this. Pierrot Le Fou is a film made by a man who—so to speak—knows all of cinema and quite deliberately sets out to make a story in which all the genres are jumbled and shuffled together. So that—among other things—Pierrot Le Fou is a commentary upon the things I've been talking about in the first four: the genres and the way they're breaking down. It's one way of showing what kind of liberties emerge once you can deconstruct the genres.

And then Bonnie & Clyde is a film that was made—originally offered to Truffaut and Godard before Arthur Penn—in their attempt to make a French New Wave film like Pierrot in America. Again, what made that film so remarkable was that it was not simply a 1930s gangster film but it was a 1930s gangster film about the mood of the '60s. It was the bringing together of different genre attitudes and conventions that made the film so exciting. I think it's an excitement, a potential in film that we've lost. We're not a people who do this kind of thing anymore and I think it's a great pity. One point of these six films is to show historically how an attitude came about and how fruitful it was and how rich it is and how exciting it could be.

Guillén: So your audiences can expect that they will come to the PFA series, you'll provide an introductory essay that will define genres for those unfamiliar with them, they'll see the film, and then discuss with you the points you have introduced?

Guillén: I'm delighted that you're going to do Vertigo. Vertigo, for me, is arguably my favorite Hitchcock film, right up there with Rear Window and The Birds, and is a film I intimately associate with San Francisco. It is the quintessential San Francisco movie.

Thomson: My thought is these are pretty well-known films and, therefore, people are probably going to be coming to see [them] again, not a first time. There may be some first-timers but a lot of people are going to be seeing them again so they're going to be more disposed to start talking about [them].

Guillén: What I like—and I think we've talked some about this before—is that, first and foremost, you apply your sense of humor to your appreciation of these films. You're serious about your approach towards film but it's not like the films are so sacrosanct that they're above being poked at a bit. I think that's important because some people feel you can only seriously study film if it's done with a serious outlook but I prefer an experiential outlook that includes both respectful and irreverential attitudes. That leads to a more enjoyable and well-rounded film experience, I think. If this goes well, we can expect to see more teaching from you?

"Therefore, often in films there are things that are mistakes that are actually very beneficial." I love that quote, making me thinking of the whole 'working inside the box' rather than 'outside the box' mentality, mistakes that result in epiphanies. The only example I can think of right now is apparently video artist Nam Jun-paik was brought to the vision of one of his pieces after 'ruining' a TV by accidentally dropping it and causing a horizontal line on the screen. (But I don't know if that's apocryphal or not.) Mistakes perhaps teach us more than getting things 'right'.

Thanks for doing the interview, Michael.

My pleasure, Adam, and great example, apocryphal or not.